10 Must See and Do's in Munich

Germany has a handful of prominent cities, and Munich tends to stray from the pack in several ways. For one, it resides over the Bavarian region, where beer flows like water and people tend to celebrate everyday feats as well as longstanding traditions. But the city won’t be defined by its Alpine associations and royal remnants alone: as the nation’s seat of modern technology and art, Munich is always out in front, and blends together the old and new surprisingly well. For an authentic Munich experience, visit these ten sites that trace the evolution of the city, its community, and its perspective. 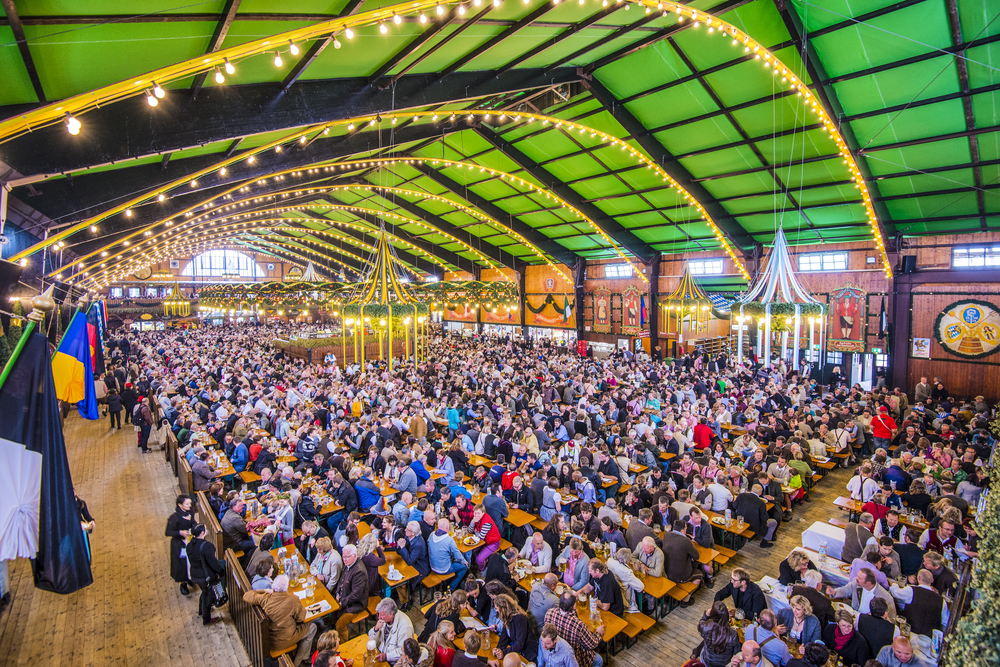 If you happen to be passing through the city in September, you really can’t miss the legendary beer festival that fills the center with colorful tents, and an even more colorful crowd. Donning lederhosen and dirndls, millions of locals and visitors alike flock to the world’s largest fall fair that lasts for 16 days and rests on Bavaria’s favorite elixir. Each year, the mayor of Munich taps the first keg of beer to kick off the festivities, and the huge tents host the liveliest, polka-backed party you will ever see: strangers dance, sing, eat and drink together until all social insecurity flies out the proverbial window. 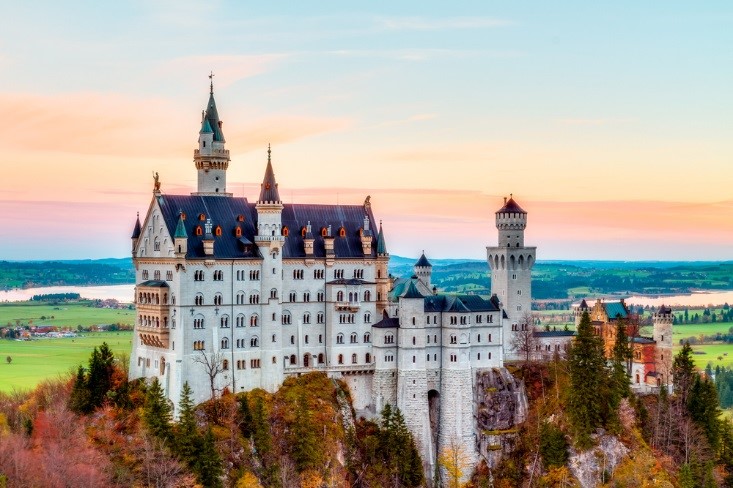 While it’s not in Munich’s center, this majestic postcard castle is only a short train ride outside the city limits – and well worth the trip. Perched on a wooded hill, with a regal white façade and turrets piercing the sky, Neuschwanstein was the pet project of King Ludwig II, and the inspiration for Disneyland’s iconic castle. Today, visitors who walk up the mile-long forested path are treated to a lovely tour of the ornate mosaic rooms and decorated hallways, plus Ludwig’s own beautiful wood-lined bedroom. The panoramic view is just as beautiful as the castle interior, especially in the autumn, when the canopy is changing color. 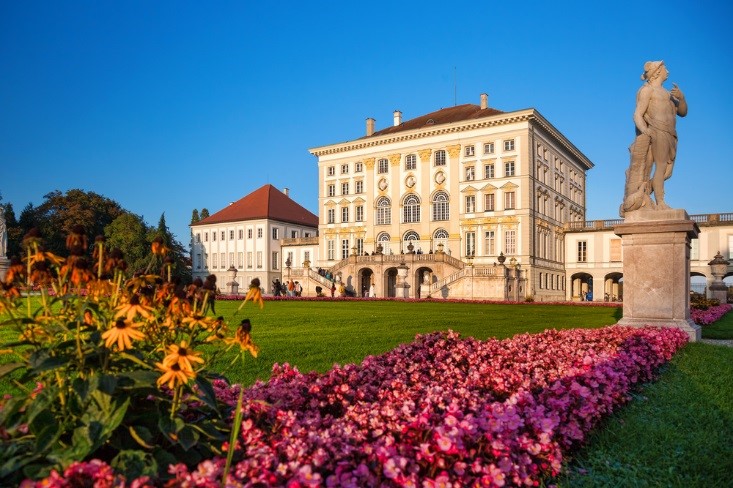 Translated as “Castle of the Nymph”, this Baroque palace is as whimsical as its name, with scenic gardens reaching out from the royal manor and a host of vintage carriages peppered outside. The apartments are furnished nicely in accessories appropriate to the era, plus there are several galleries devoted to various aspects of 17th century noble life. The grounds are the most impressive part: they will take a good half day to explore, but the greenery, flower gardens, lakes, and wildlife are more than you would ever imagine in a residence just on the outskirts of Munich. 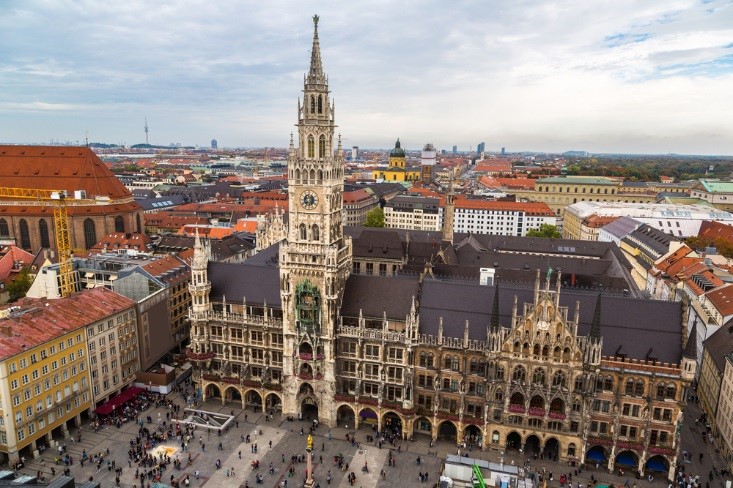 The heart and history of Munich, Marienplatz has been the center square since 1158. Markets, tournaments, ceremonies, and celebrations have sprouted from this cobbled space, and hundreds of people still pass through each day. The New City Hall (with the famous Glockenspiel) and the Old City Hall (with its Gothic tower) each take a side, while shops and restaurants dot the boundaries. It’s a busy square, with crowds of tourists, but it also has some good cafes and pleasant patios to soak in some atmosphere along with your beer. If you’re walking through the square around 11 am, noon, or 7 pm, you can catch the animated Glockenspiel show, but it’s a bit kitschy and overrated, so don’t kick yourself if you miss it. 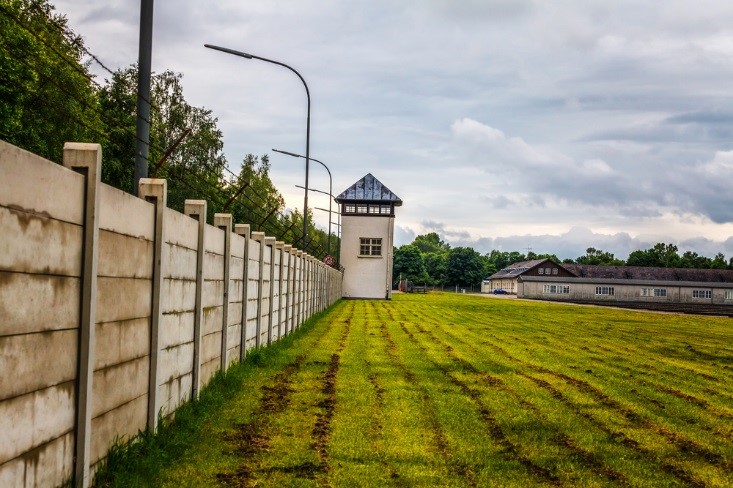 It’s not a bright attraction by any means, but the Dachau concentration camp is a very important space that has been expertly and respectfully transformed into a museum and memorial. Dachau was one of the first concentration camp sites built by the Nazi regime, and was to serve as a model for future camps. Today, visitors are led through the reconstructed barracks and some sobering artifacts of the original camp, experiencing the “path of a prisoner”. The heavy and somber prisoner baths, courtyards and crematorium are difficult to face, but along with the exhibition in the main building, extremely informative. If you are going to visit a single holocaust site on your trip, this is the one to see. 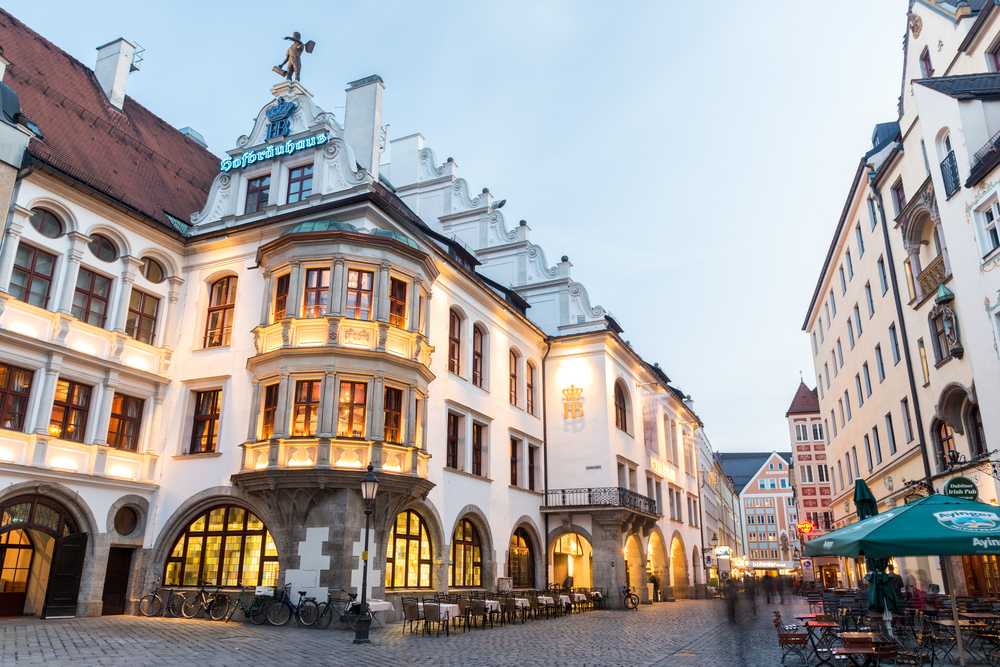 Beer halls are significant fixtures in Bavaria: people meet, argue, decide, celebrate and learn under their sprawling ceilings and over the huge glass steins, so join the fun. There are too many beer halls to name, but some have enjoyed an elevated status for decades. Perhaps the most well-known is the Hofbrauhaus, dating back to the 16th century and covering three floors, with a small but delicious selection of beer and scuffed tables that come with centuries of wear. The Hofbrauhaus has a sinister side to its history, as well – it’s widely believed that there were once large swastikas on the ceiling when the hall was used for Nazi Party meetings, but have since been painted over. 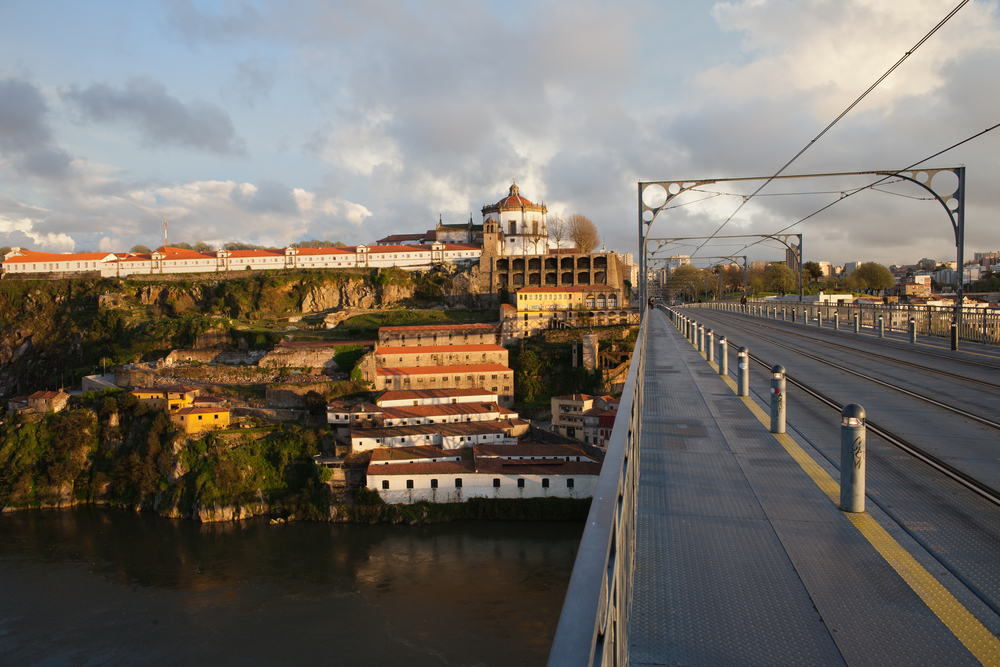 If Hofbrauhaus is the city’s historic beer hall, Augustiner is Munich’s quintessential beer garden. In the summer, head to their sprawling patio under a canopy of trees and grab a seat with 800 other visitors looking for a refreshing brew. The beer, like many of Munich’s mainstay brands, is both flavorful and refreshing, and the food is typical hearty Bavarian fare that fits the scene nicely. If the weather turns or the seasons change, duck into the boisterous beer hall at the back of the 19th century building, or take the winding staircase down into the keller, where you can enjoy your fare at communal tables under arched stone ceilings. 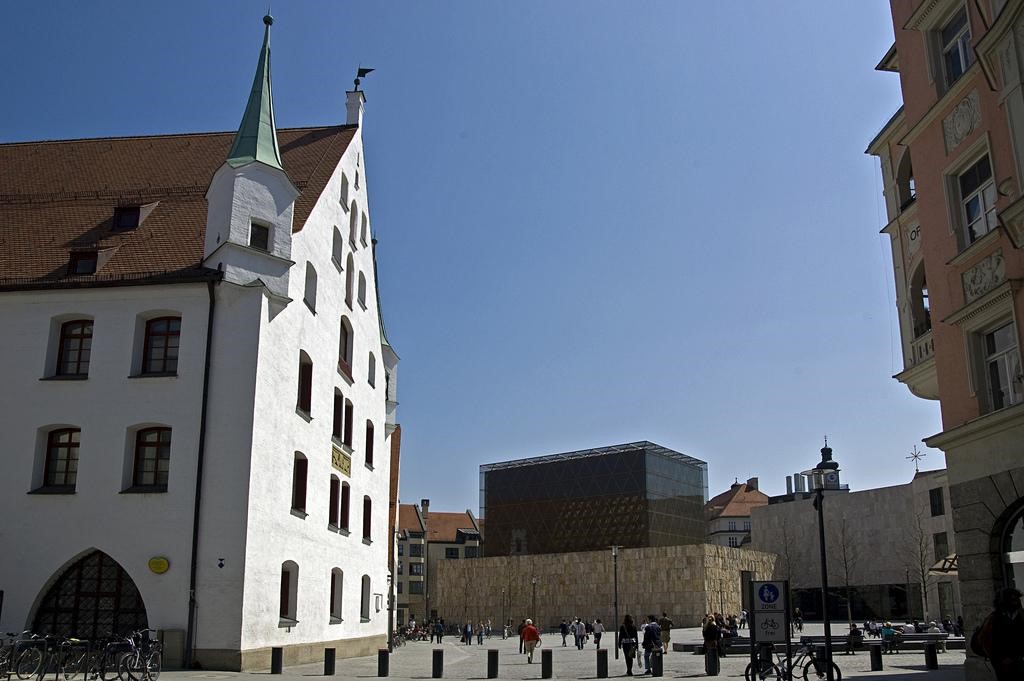 Brimming with history and a unique sense of heritage, the buildings and structure of St. Jakobs-Platz tell an important story of Jewish life in Munich before the war. You might expect it to be a bit solemn given its central subject, but this square is actually an uplifting nod to the return and strengthening of Munich’s Jewish community, six decades after the fall of the Nazis. Between the medieval City Museum and modern Jewish Museum lies a big open square, inviting people to walk through the area before popping into an exhibit or grabbing a coffee at a museum café.

Munich’s museum quarter is saturated with world-class art collections and exhibitions, ranging from the traditional to the ultra-modern, and sitting side by side in a tight cluster. If you prefer to do things chronologically, start with the Alte and Neue Pinakotheks to see the masterpieces by the likes of Rubens, Raphael, and Van Gogh, then pop into the Galerie im Lenbachhaus, a, grand manor in the Italian style known for its superb collection of paintings from Munich’s famous 20th century art group, the Blaue Reiter. Don’t miss the new modern art centers – the Pinakothek der Moderne and the Brandhorst – for eye-opening textile, architectural design, and postmodern pieces. 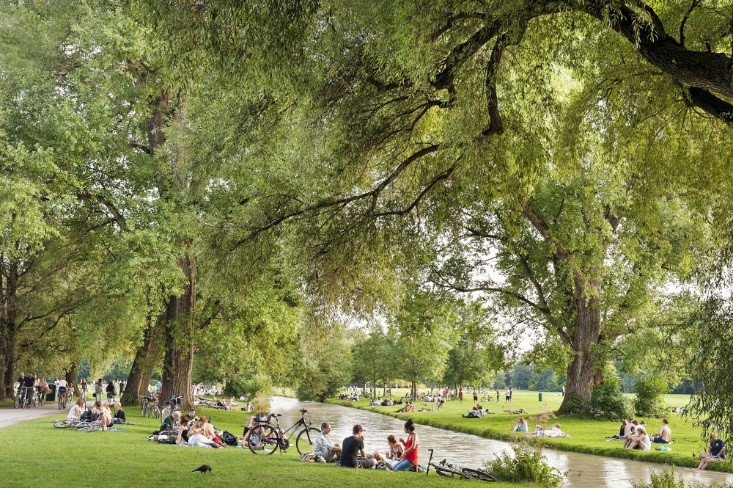 Most major cities have a swath of green space, but Munich’s English Garden eclipses any urban garden on either side of the Atlantic. Over four square kilometers, you’ll find wide open fields, lakes, forests, and meandering trails, with plenty of space for everyone to spread out and take in the fresh air. It’s a peaceful spot that’s manicured with German precision, but there’s a good deal of activity as well, from beer gardens to boating. After you wander through a few miles of greenery, stop into the Seehaus, a particularly excellent beer garden on the edge of the Kleinhesselohe Lake for a rest and a drink.

Many of Munich’s best sites are in the center, and the excellent metro system can whisk you to any of them quickly and comfortably. However, it’s a very walkable city as well, so if the weather’s nice, explore the side streets and squares that hide away in the tree-lined neighbourhoods. Bavarians are fond of their markets, and you’re bound to run into some stands peddling artisanal foods and traditional crafts that make for better souvenirs than the mass.