15 Of The Best Beaches In The Bahamas

Life’s a beach - especially if you’re in the Bahamas, where you’re never too far from a patch of sand to call home for the day. No matter whether you prefer a lively, commercial flavor or a remote, untouched one, there’s literally something for everyone here. Grab your towel, pack your lotion and get ready to find your perfect Bahamian beach.  See 15 of the best beaches in the Bahamas.

It’s located on Long Island - which, as its name suggests, has 80 miles of glorious beaches stretching along its coastline - so even if you don’t make it to Dean’s Blue Hole, you’ll still be spoiled for choice. It’s worth seeking out though, if only for its sheer visual impact - the shade of blue it’s colored is nothing short of dazzling. Part of that hue comes from the fact that it’s incredibly deep - the second deepest saltwater sinkhole in the world, no less, with a gradual widening the deeper down you go: beneath its 75 foot wide surface, it becomes a chamber of vast proportions. Snorkel straight from the shore or take in the view from the sand - either way, you’re in a for a beautiful time.

No one’s saying that you can’t just kick back and relax on your towel here, but you may feel a touch guilty if you do - Goodman’s Bay Beach and its adjacent park are popular spots for fitness activities, while the ramp is used by a number of watersports operators and enthusiasts. This has the advantage, however, of meaning that it’s easy to try out jet skiing or parasailing, if you’re so inclined - or when the heat gets too much, take a dip in the cool, clear water. Bring your own supplies, as there aren’t any restaurants here, although at peak times there are independent vendors selling snacks and drinks.

Forget about any swimsuit anxiety stemming from one too many burgers, because at Big Major Cay you get to swim with pigs. Yes, actual pigs. The island is otherwise uninhabited, and how the pigs came to be there is shrouded in mystery, but the general feeling is that sailors dropped them off with plans of returning to eat them. Instead, however, the pigs now spend their days basking and paddling - yes, they are accomplished swimmers, and more than happy for tourists to join them in the water. Several of the pigs died last year, probably from ingesting sand with food left on the beach, so be sure to make your visit considerately; if you are going to feed them, do so in the water. 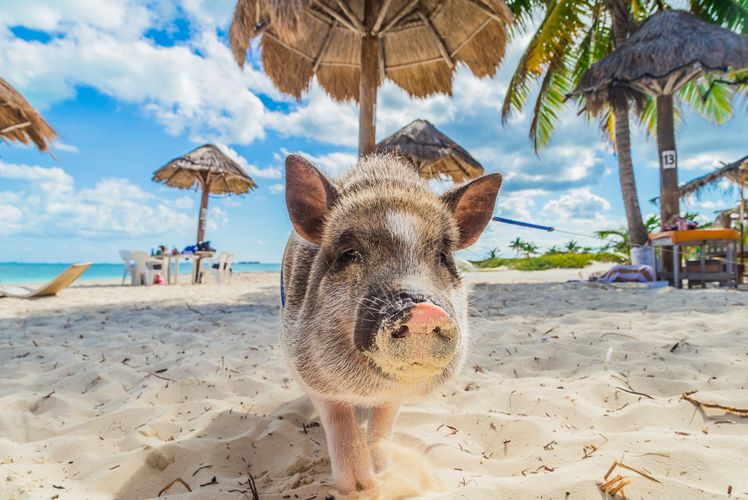 Get ready to let the good times roll because Junkanoo Beach is, if nothing else, a place to party. A constant throb of activity characterizes this small area, with vendors providing all manner of services, from those you might need -like chairs and umbrellas - to those you almost certainly don’t - think tacky souvenirs - all served with up with a side of cocktails in coconut shells, music and the non-stop theater of the parade of yachts and cruise liners that head into Nassau Harbor. Within walking distance of downtown Nassau, you’ll find the sand here to be coarser and rockier than you might expect from a Bahamian beach, although the water is still silkily refreshing. 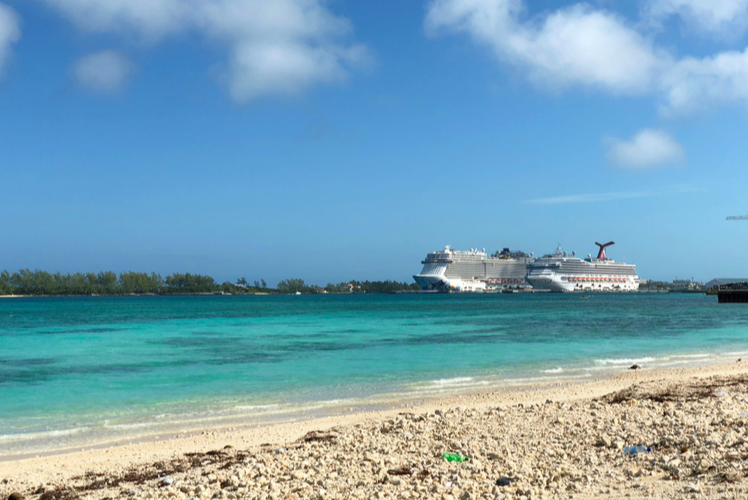 I want to be alone … Greta Garbo would have loved Greenwood Beach. A definite must for seekers of solitude, it lies on the remote southern edge of Cat Island and offers you the opportunity to make utterly fresh prints in its otherwise unmarked sand. And of that there is miles - added to which loveliness is the fact that a generous scattering of crushed coral infuses it with a rosy tinge. Offshore reefs provide some in-water activity for newbies to snorkeling, although they’re not especially vivid or active. Nearby, the historic village of Port Howe, with its plantation ruins, adds an extra element of interest to the long drive south. 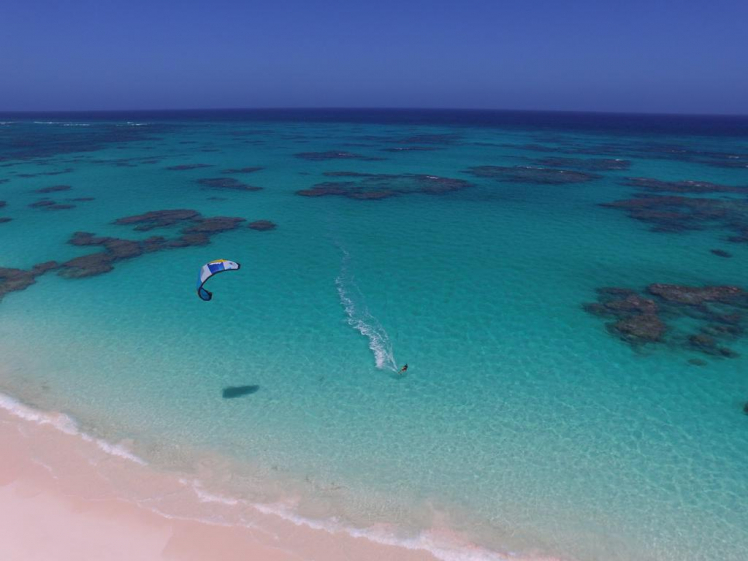 Offering the Nassau escapee dozens of secluded, sandy beaches from which to choose, you’ll need to come to Rose Bay fully prepared with a cool box packed with all of your food and drink for the day - otherwise, cast a line off the side of the boat on your way over and grill your catch when you arrive. The huge positive associated with this back-to-basics offering, however, is the sense of calm and an unspoiled beauty that the island guarantees. Whether you’re boating under your own steam or with a charter company, stop off at Sandy Cay for a refreshing dip alongside wise-faced sea turtles. 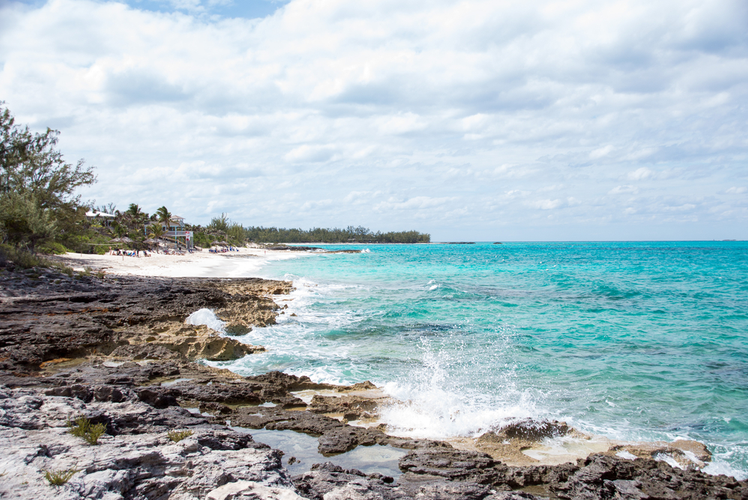 Difficult to access - it takes over an hour to reach from your setting-off point of Governor’s Harbour and includes some very rugged terrain - it’s well worth the effort of coming here, whether you opt to drive yourself (four wheel drive essential) or explore with a tour company. Don’t make the mistake of thinking that Lighthouse Bay is Lighthouse Beach, or you’ll regret the journey - continue on until you see the lighthouse and get something soft ready under your jaw to cushion the drop. Two gently curving coves face in the direction of sunrise and sunset - so you’re winning no matter which end of the day you’re here - and limestone cliffs form interesting textures and backdrops. There’s also coral to explore in the shallow, warm water, which is safe and calm for snorkelling. 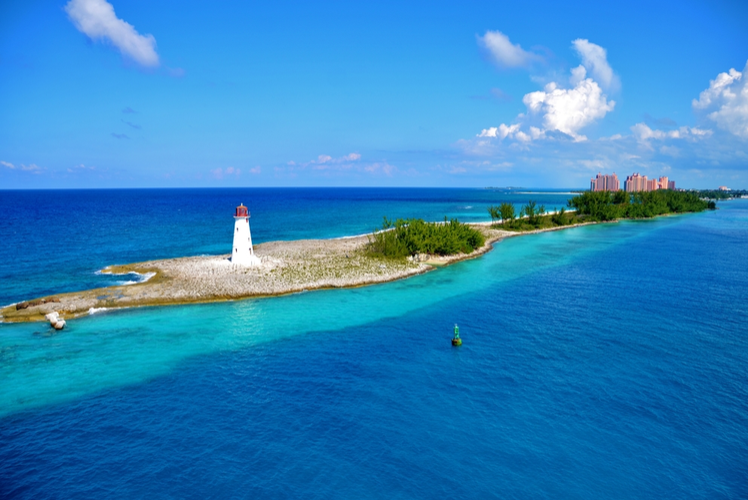 Powdery white sand on a curved beach is just part of the appeal at Eleuthera’s Winding Bay; the waters that fringe it are shallow and safe, ideal for pleasure swimmers and children. Kayaking at high tide is an enjoyable way to spend a few hours here - venture through the mangrove creek at the far end of the cove and you’ll encounter turtles; keep paddling and the creek eventually empties into a natural harbor. Extend your time here by renting one of the vacation homes that line the beach; many of them open straight out to the beach so that you can virtually roll out of bed and onto the sand - the dream! 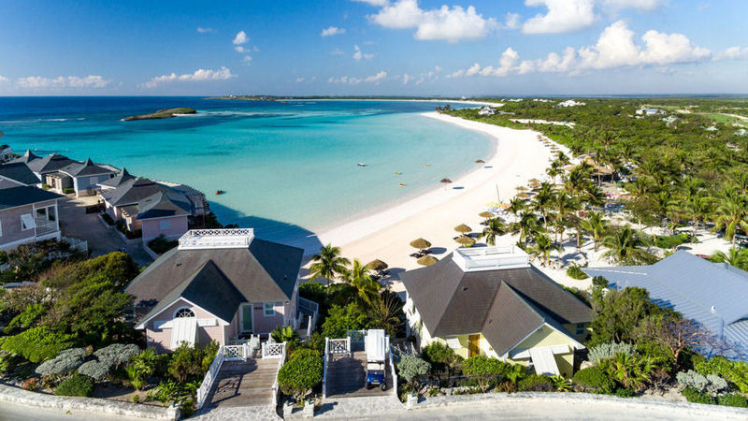 If you tend to look at life through rose-tinted glasses, then you’ll adore Harbour Island’s Pink Sand Beach. The sand takes its unique blushing hue from the crushed pink and red shells of tiny marine insects, which also have the benefit of ensuring that the sand never gets hot. Barefoot bliss! Stretching for three miles, it’s lapped at by low, lazy waves; the result of offshore reefs that keep the water calm. For the ultimate in romance, take to the pink sands on horseback in the evening, when the setting sun infuses the beach with even more of a rosy glow. 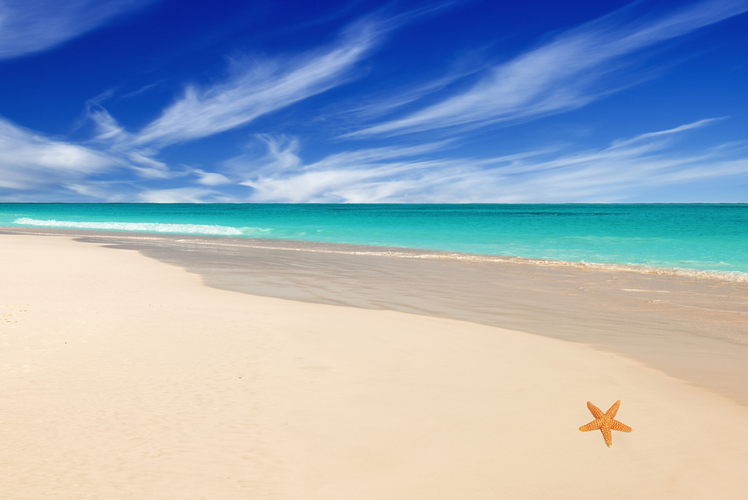 Generally speaking, pursuits more rugged than beach lounging form the backbone of Inagua’s appeal - the serrated coastline is practically treacherous by gentle Bahamian standards, and there is bird spotting and deep sea angling aplenty. The exception is Colins Beach, which combines a long strip of sand with almost total privacy, bolstered by the fact that the island’s sole settlement isn’t particularly close by. Facilities, including toilets, are extremely basic - but if it’s the rustic pleasure of swaying on a tree swing or admiring the water from sand shaded by trees that you crave, then there’s no finer place. Snorkelling also gets a huge thumbs up here, with large coral heads and sub-marine scenes easily accessible from the beach. 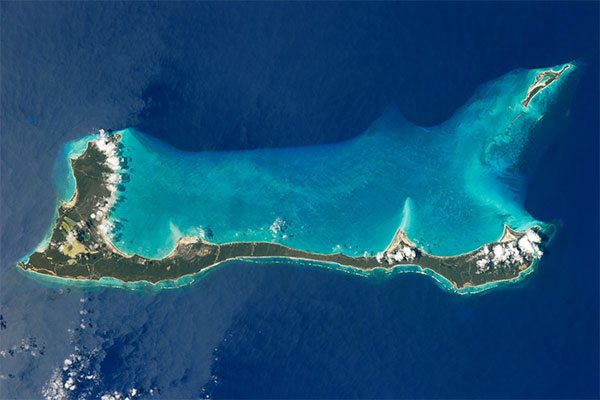 White sand may seem to be almost a given in this part of the world, but not all white sandy beaches are created equal, and the ones on Stocking Island could easily be mistaken for talcum powder. From Great Exuma Island’s Elizabeth Harbour, you can reach this offshore island easily by boat, trailing one hand in the crystal clear waters as you go; these same waters offers up superb diving opportunities , with underwater caves, gardens of coral and enticing blue holes to be explored. As lovely as the island is, it’s rarely crowded, leaving you free to act out your castaway fantasies. 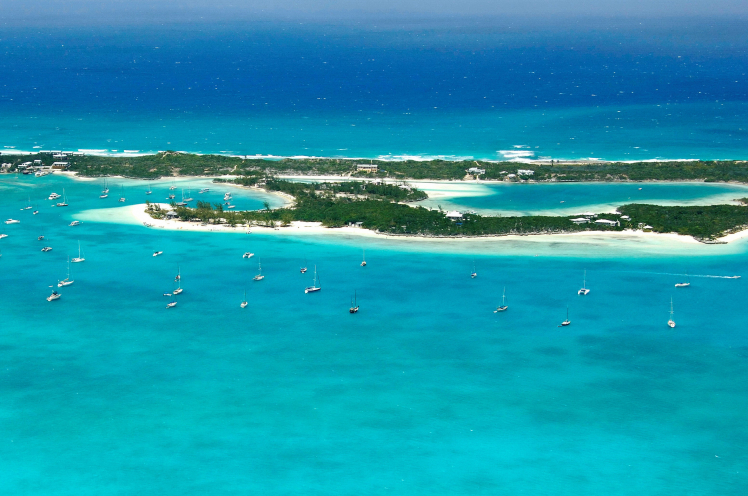 Of course, not everyone’s idea of a ‘best beach’ includes seclusion - some people actively adore crowds and the people-watching opportunities that they offer up, not to mention the attendant swathe of upmarket facilities put in place to cater for those crowds. If this is you, head to Cabbage Beach, which is home to many of Paradise Island’s biggest resorts and hotels - the water is still an idyllic picture of shifting shades of blue thrown into sharp relief by the eye-blinding whiteness of the sand. The eastern end tends to be a little less crowded than the western one; take care on windy days as the waves can become dangerous. 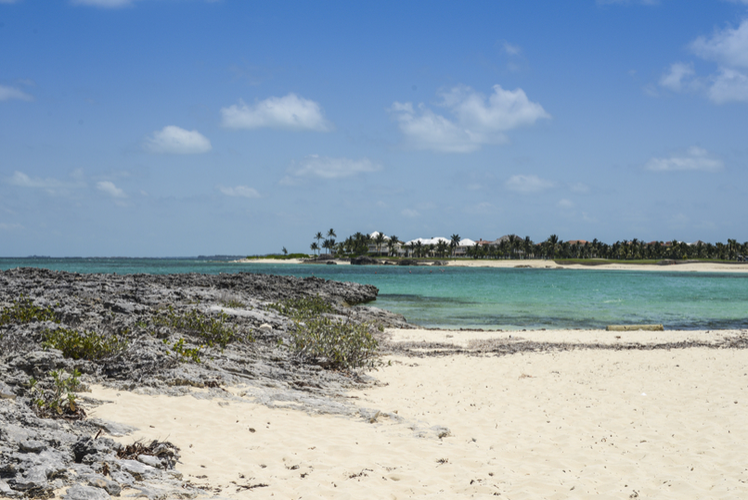 You’d be hard pressed to find an Exuma beach that didn’t make you instantly sprout a set of heart eyes, but this one may even make them throb with delight. Although it’s officially called Pelican Beach, this endless strip of icing sugar white sand forms the longest beach on Little Exuma, and is more commonly referred to by the name that recognizes its position directly on the Tropic of Cancer line, which divides the subtropics from the tropics. Relatively uncrowded, its brilliant turquoise waters and a gently shelving seafloor make it a blissful place to spend the day. 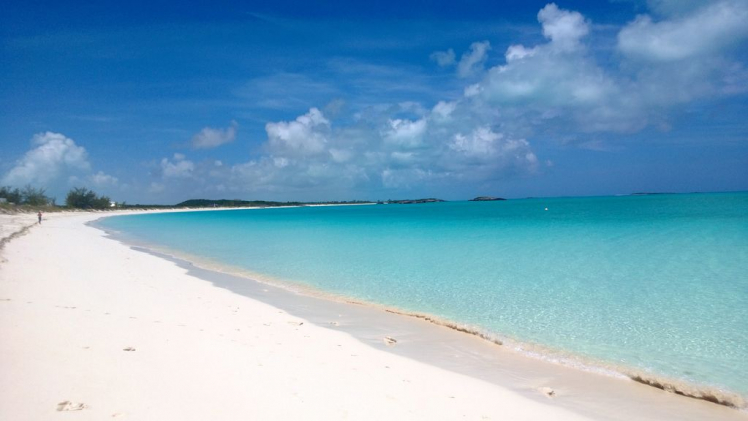 Development has been the scourge of many a beautiful beach, so it makes sense to seek out those within protected areas. The Exuma Cays Land and Sea Park was made a national park many years ago and its status means that everything most appealing about it has been allowed to survive and flourish; Shroud Cay is an uninhabited island within it and, as such, its beaches are incredibly alluring. Make the most of the island’s network of mangrove creeks by navigating them en route to Camp Driftwood Beach; come here at high tide for a ‘spin cycle’ effect at the point where the creek enters the ocean, and you’ll be washed, enjoyably, from one side of the beach to the other. 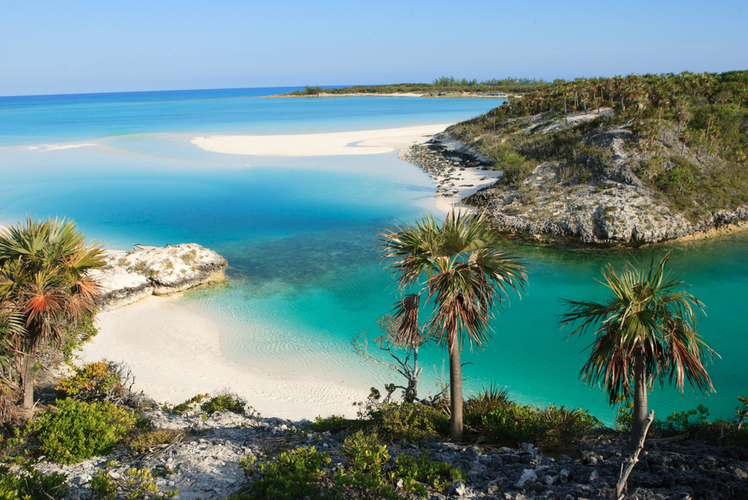 Bimini is an enviably slender 210 meters wide, so no matter where you are, you’re always within easy reach of a stretch of sand on which to throw your towel. Head to its western side, where the beach is uninterrupted and pristine; Radio Beach is a good one to head to on impulse, since it has everything you might need - bathrooms, vendors and even, on weekends, music - when you haven’t packed supplies. Spook Hill Beach - so called because it is adjacent to a cemetery - will require more forethought, but is worth it if you do: its pine trees create a blanket of shade in which to while away a few relaxed hours picnicking. Beware the depth if you head out to swim; the drop is very sudden and extreme. 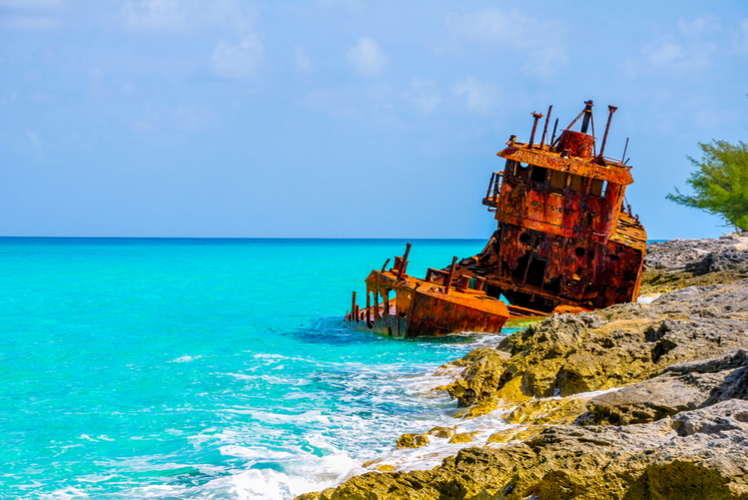 Comment on 15 Of The Best Beaches In The Bahamas