7 Great Parks for a Summer Vacation

Since the late 19th century, national parks have grown to protect the natural wonder and variety of the country, but also to afford a new perspective and appreciation to wide-eyed travelers. You don’t have to be an outdoor enthusiast to revel in the beauty of American National Parks – the natural mystery and magnetic vistas are enough to win anyone over. Given the astounding number of peaks and valleys that cradle the nation’s flora, fauna and geological footprint, you could find hundreds of beautiful spots to spend some time, but here are a few tried-and-true favorites that will appeal to any nature lover. 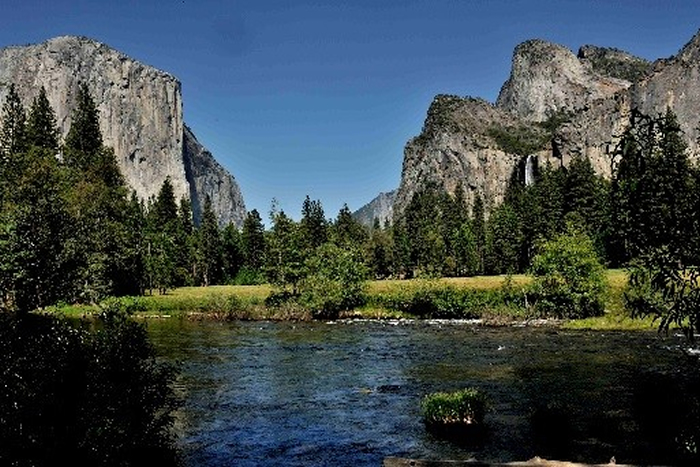 Yosemite Park is a treasure trove of record-breaking beauty. It contains the world’s tallest granite mountain (El Capitan), North America’s highest waterfall, and what many would argue to be the best views of any national park in the country. Towering sequoias to the south, Tuolumne Meadows on the plateau, meandering waters on the valley floor, and gigantic cliffs all around provide a spectrum of sensational landscape and activity options. Hike, climb, raft, fish or simply sit and enjoy some of the most beautiful sights you’ll ever see. 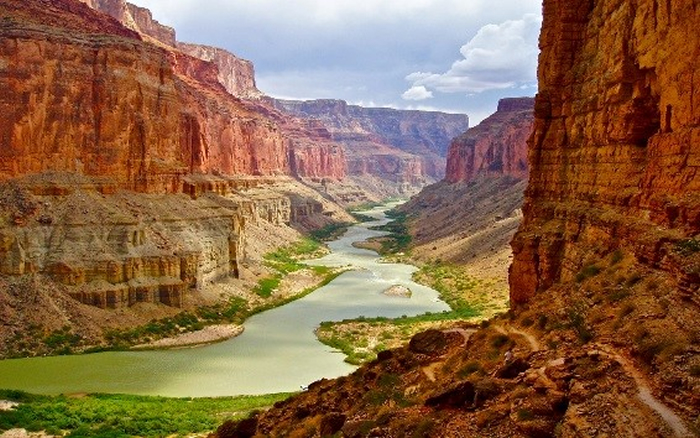 America’s largest canyon is something you have to see with your own eyes, for the breadth, depth, colours and carvings are so detailed and nuanced that a photograph just won’t do. Standing a mile over the winding Colorado River is breathtaking, but the best experience awaits you in the belly of the canyon. Hike one of the several trails down into the rocky floor, where you’ll see the layers of rock up close (a testament to the age of the area – the pink granite is almost 2 billion years old), and enjoy a fantastic new perspective from the ground up. The Grand Canyon is one of the most popular national parks, but it’s also vast, and you can always check out the less-visited parts for a more isolated experience among the prehistoric rocks. 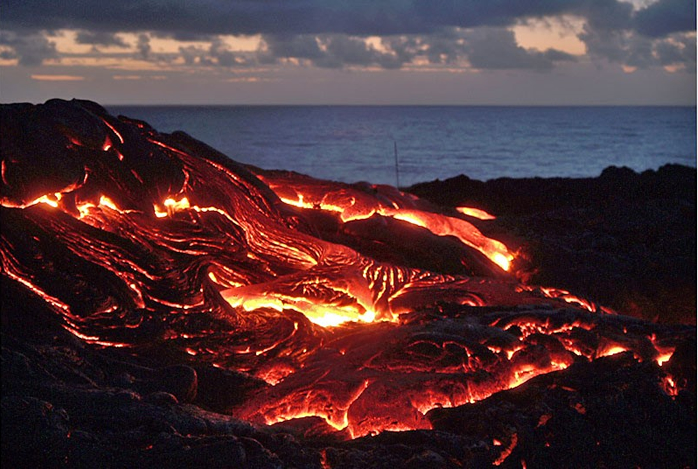 A lesson in geography, geology, and Hawaiian cultural history awaits at Hawaii Volcanoes Park on the Big Island – one you won’t soon forget. Here you’ll see the most active volcano on earth, Kilauea, which has been erupting since 1983: walk across the black lava flats at night to catch a glimpse of the red hot lava spilling into the sea and shooting sparks into the sky. Take another day or two to check out the Mauna Loa skyline, see the legendary Halema’uma’u crater, and walk through the petrified lava tubes. The park is big and spans a good deal of changing landscape, and with world-class guides and information stations, you’re bound to learn a whole lot about this little corner of the world, and the planet in general. 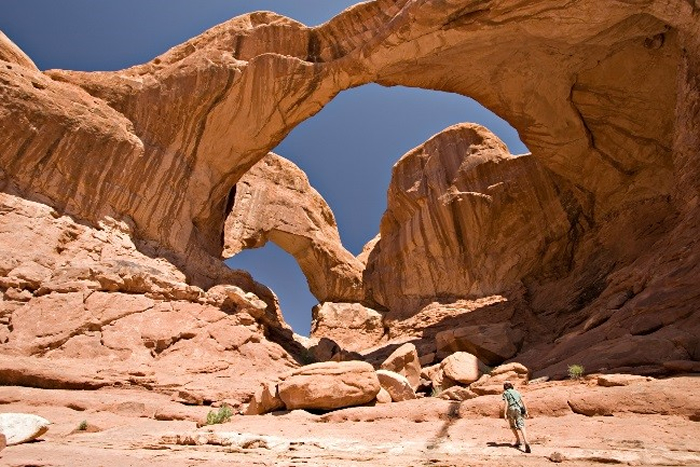 A lot of red rock and a bit of Hollywood flair makes Utah’s Arches Park an exciting site to visit. Serving as the backdrop to many movies, it has inspired the artistic vision of America’s rugged badlands for generations, and continues to delight hikers, sightseers and rock enthusiasts. Nowhere else will you see such a surprisingly array of naturally-formed rock arches, needles, pinnacles and bridges, including the famous Delicate Arch that graces the state license plate and countless desert portraits. Short, easy hikes abound for the typical traveler to enjoy, and the more adventurous can tackle longer trails and world-class climbing routes to test their skill. 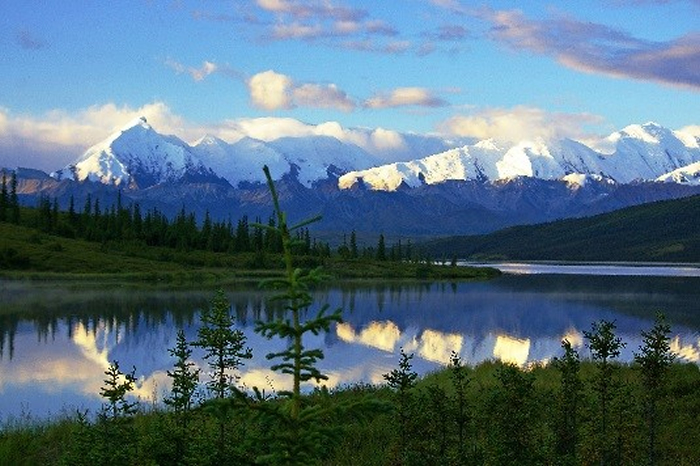 If you’re looking for raw wilderness and rare wildlife, look no further than Alaska’s hidden gem, Denali. You won’t find towering trees or blossoming meadows here, but you will be witness to the nation’s most astounding mountains and glaciers, plus a sprawling white and rocky expanse of land that’s home to moose, caribou, bear, and wolves. This is a truly rural experience: after following the single, winding road for a while, you’ll have to leave your car and board a bus to the heart of the park. In the shadow of Mount McKinley sits Wonder Lake, a clean and cold pool of reflection. During certain times of the year, you may be lucky enough to see the Toklat wolf pack and swaths of migrating caribou, too. 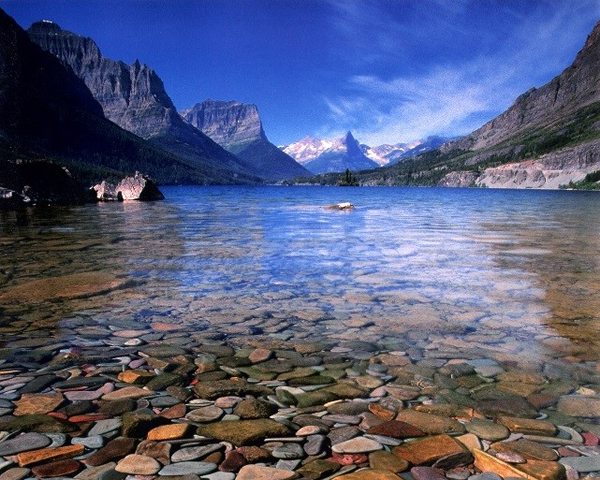 The prize for the most variety and idyllic beauty may go to Glacier Park, where you’ll find miles of flowering meadows speckled with 762 lakes at the foot of spikey mountain peaks and 25 active glaciers. Mountain goats and grizzly bears wander the terrain, and you can get a birds-eye view on the Going-to-the-Sun Road that winds around precarious cliff edges to the park’s interior. If you’d rather stay grounded, consider a guided boat tour around the clear blue lakes, maybe topped off with a hike around the coastline and through the forests. 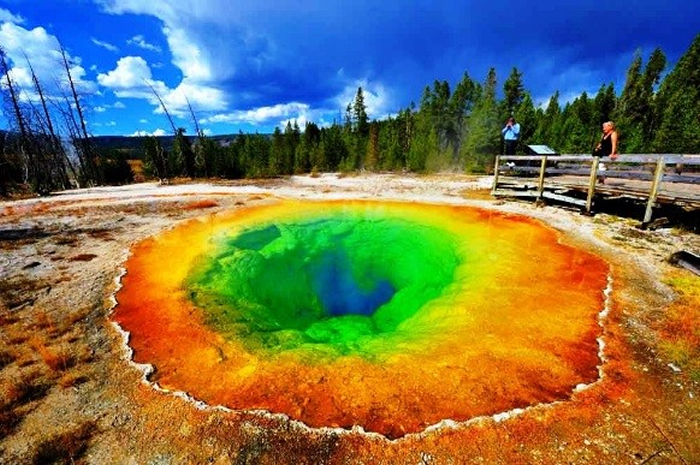 Yellowstone Park is the world’s first national park, gaining the title in 1872 and setting the standard for other natural preserves. Famous for its geysers, including Old Faithful, which spouts every hour or two, Yellowstone has a living, changing atmosphere. Alongside its thermal hotspots are arid canyons, mountains, petrified forests, and high altitude lakes, making it a veritable journey through America’s ecosystems. The park also happens to have the largest concentration of mammals in the USA – 67 species, to be exact.

Despite the growing human presence, America’s landscape is still vast and startlingly varied, which means there’s a lot of different landscape to see. Some places are easier to get to than others, and that can make a difference for budget-savvy travelers. Look into laws, rules, and options surrounding transportation and accommodation in and around the parks before you head out – you’re bound to have a more enjoyable expedition with some prudent planning, especially in high season.