Things to do in Moscow

Russia is a vast country, but Moscow is unquestionably its beating heart, the place where so much of the nation’s history has been plotted and played out. Replete with monuments and studded with modern-day icons, you truly get the sense of inhabiting several coexistent worlds when you start scratching the surface of all the things to do in Moscow.

This square is so steeped in history that just to walk its cobblestones seems almost unbelievable. Once just a market square, used for nothing more momentous than the buying and selling of goods by locals, The Red Square has become an iconic symbol of Russia’s Capital. Speeches from Soviet leaders Lenin and, later, Stalin were delivered here and; during the 20th century, it became synonymous with shows of Soviet strength by way of parades and demonstrations. Its surrounding architecture - St Basil’s Cathedral and the Kremlin, for instance - add to its appeal and make it one of the most visited sights in Moscow. 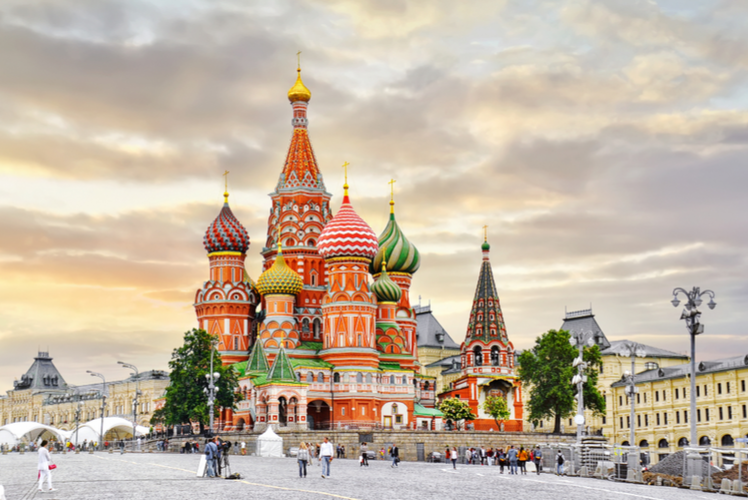 Banya, Russian bathhouses, are a tradition dating back hundreds of years and continue to be a popular way to cleanse and relax among Russian people. Although they exist, in various forms, all over the country, Moscow is a wonderful place to engage in the experience in suitably opulent and grand surroundings. Leave your reservations at the door and prepare to be steamed and beaten - in the most wonderfully refreshing way, of course. Sandunovsky Banya, which was established in 1808, is the oldest functioning banya in the capital, and the decor features an indulgent mix of styles and periods. It’s also open for tours, if the idea of the bathing experience is more immersive than you want your travels to be. 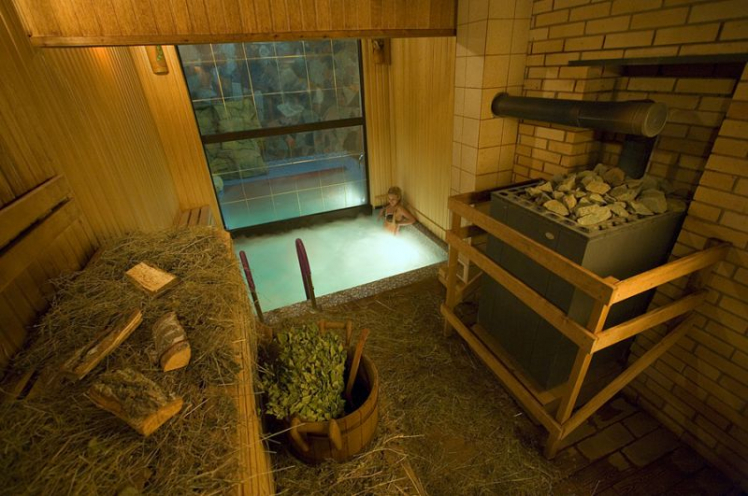 Political visionary or ruthless dictator? Whatever your opinions on the leader of the Russian Revolution, there’s no doubt that Vladimir Ilyich Ulaynov, otherwise known as Lenin, was one of the most compelling and influential figures of the 20th century. The concrete and marble Mausoleum, on the edge of the Red Square, is a striking enough building in its own right, but the fact that it houses Lenin’s embalmed body in a glass sarcophagus is what draws approximately 2.5 million visitors each year, despite rigorous security checks and lengthy queues. It was first opened to the public in 1924, shortly after Lenin’s death, although it didn’t exist in its current form until 1930, when completed by the architect Aleksey Shchusev, who had been commissioned with its design and was also responsible for the two temporary monuments that stood in its place previously.

This is one of Moscow’s most iconic and instantly recognizable structures. Despite the appearance for which it’s so well known, however, the structure was originally built to be white, and its domes were gold; only 1860 did it take on its current aspect - think color swirls on garlic bulbs, psychedelic Disneyland, acid castles in the sky. Originally commissioned by Ivan the Terrible to commemorate the capture of Kazan from the Mongols in 1552, it was created between 1555 and 1561. Consisting of nine separate chapels, myths swirl around its domes like the colors themselves - for example, that Ivan had the builders blinded so that they could never create anything comparable. Narrowly avoiding destruction under Stalin, the Cathedral is now a museum, with only one annual service held in October.

Opened in 1894 to mark the coronation of Aleksander III, this impressive neo-classical style building on the Red Square marked the culmination of a 20-year project aimed at bringing together a vast number of objects and artefacts into a consolidated collection. Russia’s largest coin collection is here, but there are also relics of Russian Imperialism, including Peter the Great’s silver death mask, manuscripts and artworks from the 6th century. Objects spanning as far back as the tribal cultures who once inhabited this vast nation are a fascinating highlight - check out the 5000 year old boat. Open seven days a week, be sure to look up on arriving - the ceiling of the entrance hall is covered with a genealogical tree of Russian rulers. 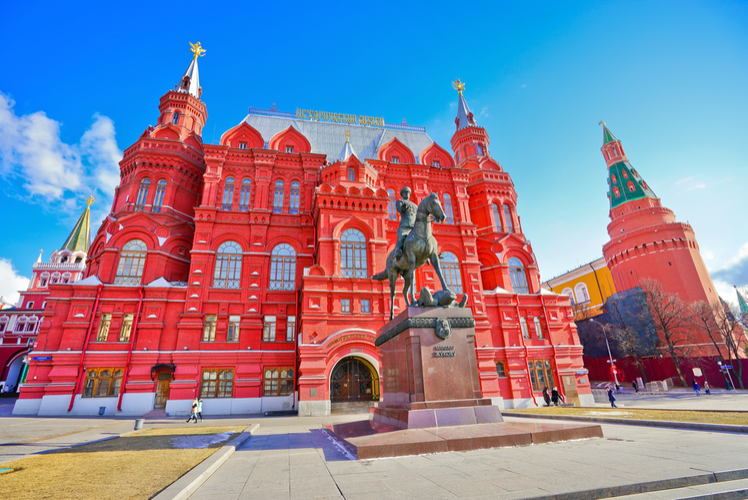 Moscow’s incredible history will doubtless take up much of your attention while here, but let’s not overlook its more recent history, which involves a degree of wealth, hedonism and commercialism which must surely have Lenin turning in his mausoleum when the guards aren’t looking. GUM was originally known as the Upper Trading Rows and was built in the late 19th century; its ornate interior, marble floors and gorgeous glass roof rate a second look, even if you’re not here to shop - but if you are, there are over 200 boutiques to browse, ranging from the high end designers like Chanel and Dior, to the more wallet-friendly Zara. There are also a large number of chic places at which to eat and, of course, it goes without saying that the people watching is top notch. 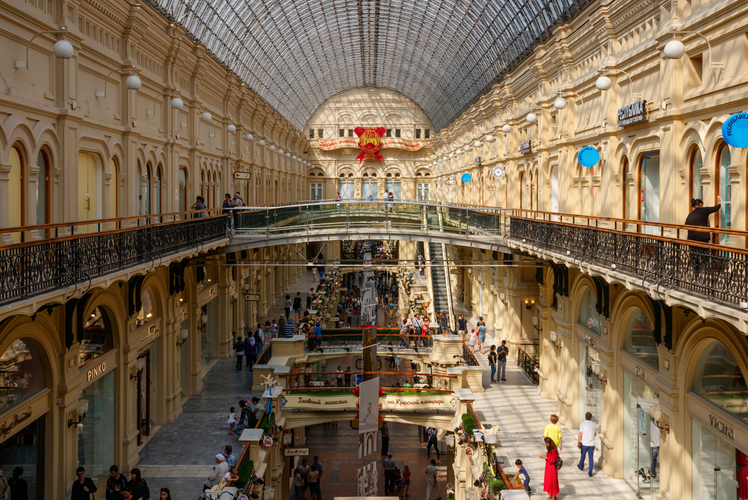 The development of the railways was a huge feature in the history of Imperial Russia; under Soviet rule, and as the capital grew at an incredible rate, it was decreed that a Metro system needed to be constructed as a ‘Palace for the People’. Eleven of the twelve lines are radial, and a story exists around the creation of the final, circular line which acknowledges the fearful esteem in which Stalin was held. The leader allegedly placed his teacup on the plan, leaving a brown ring - and his yes-men immediately fell over themselves to praise his brilliance in conceiving of this additional route. In a show of further deference, this line on the color-coded map is brown. Not only is the metro cheap and efficient, but each station is decorated differently - and they are almost all as stunning and ornate as each other. 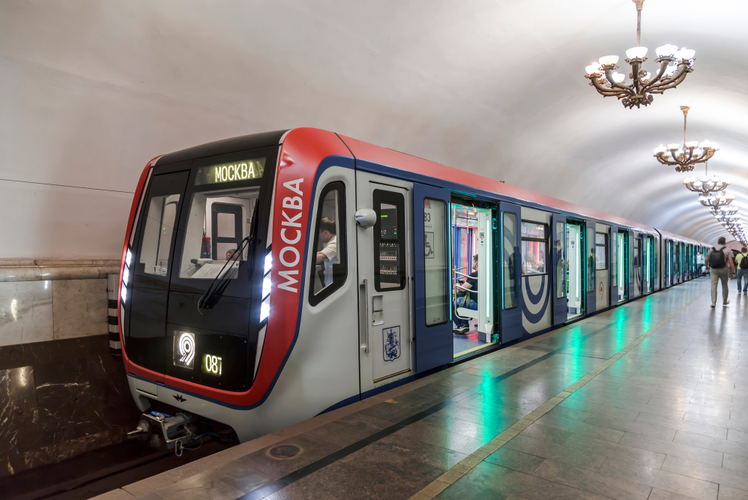 As Moscow’s main green space, Gorky Park is, of course, a lovely place to take some time out from the often overwhelming capital. That’s not to say that there’s nothing to do here though - in fact, as far as leisure options go, you’re as likely to be as momentarily bamboozled by choice as when someone asks you whether you’d like to check out the Kremlin or St Basil’s first? Lessons in yoga and dance, as well as segway and boat rentals, plus beach volleyball and racquet sports abound; in winter, the park takes on a fairytale aspect, with an enormous skating rink. Culture buffs will also enjoy the art museum within the grounds, as well as the open air cinema screenings that take place throughout the summer. 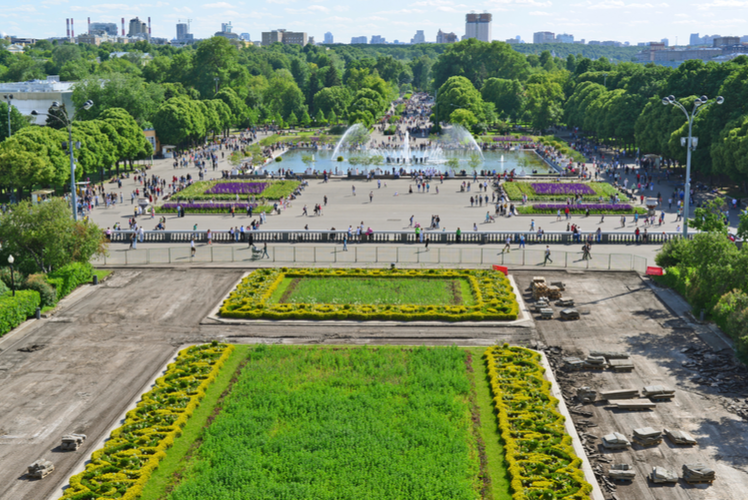 The Russian Ballet is renowned the world over; it’s pretty much the benchmark by which every other ballet school is measured - so while in Moscow, it’s almost certainly a given that you’re going to want to catch a performance at the world-famous Bolshoi Theater. Operas are held more frequently than ballets, so you have some scope for viewing a variety of performances - but even if theater isn’t your thing, it’s still worth checking out the interior of this significant building, which was opened on 20 October 1856, the coronation day of Tsar Alexander II; English-speaking tours start on Mondays, Wednesdays and Fridays at 11.15am. 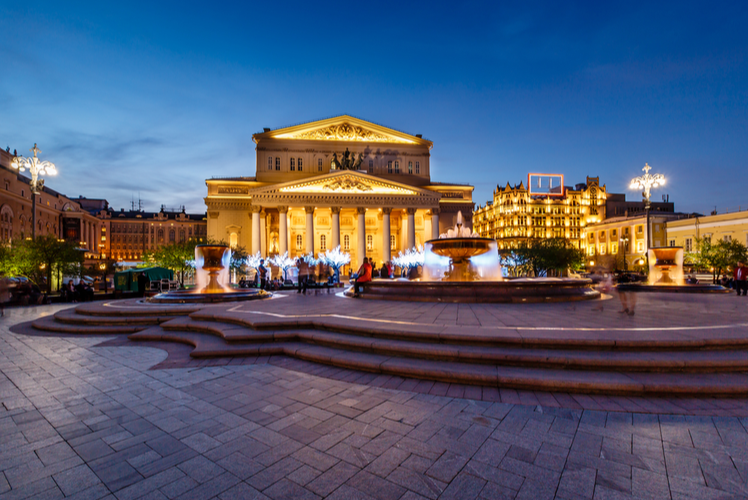 Claiming to be the oldest monastery in Moscow, Novospassky is located within striking distance of Taganskaya Placel, in Moscow’s southeast. The centerpiece of this monastery is the Transfiguration Cathedral, which, with its five domes, was built in the mid-17th century by the Russian Imperial family and modelled on the Kremlin’s Assumption Cathedral. The history of Christianity in Russia is depicted in frescoes, and the family tree of the Romanovs - spanning back as far as the Viking Prince Rurik, but abruptly ended by the execution of the last Tzar and his family in 1918 - inhabits one entire wall. Perhaps unsurprisingly, the monastery was claimed by the Soviets during their rule and used as a prison; later it became a police drunk tank and then an art restoration institute, until finally becoming a Russian Orthodox church again in 1991. 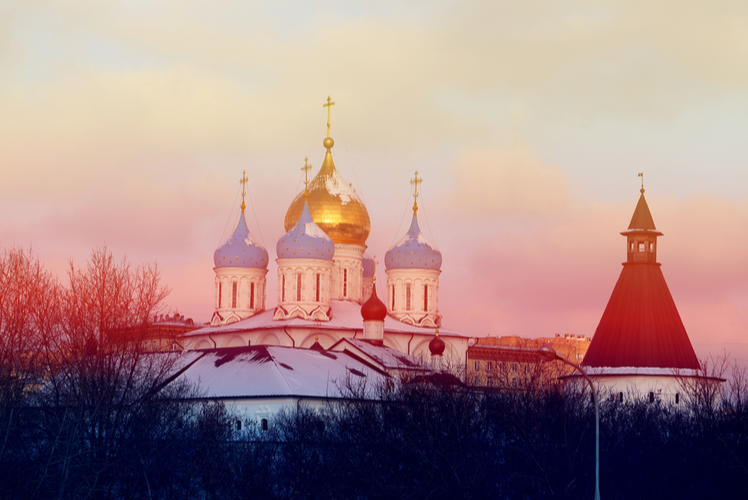 Enormous and imposing, you could easily spend the entirety of your time in Moscow wandering around this active fortress; it contains no fewer than five squares and twenty towers, as well as a huge number of buildings. Be sure to check out the Armoury, which houses an incredible collection of over 4,000 pieces of treasure, including the Russian Diamond Fund, the Imperial Crown of Russia, 12th century necklaces and the ivory throne of Ivan the Terrible. The world’s largest bell and cannon are both housed in the Kremlin too - the Tsar cannon dates back to 1586 and is 5.34 meters long, and originally stood in the Red Square for more than one hundred years before being moved to the Kremlin. Not far from it, you’ll find the Tsar Bell, which weighs in at almost 202 tons. Oddly enough, neither bell nor cannon were ever used for their intended purposes. 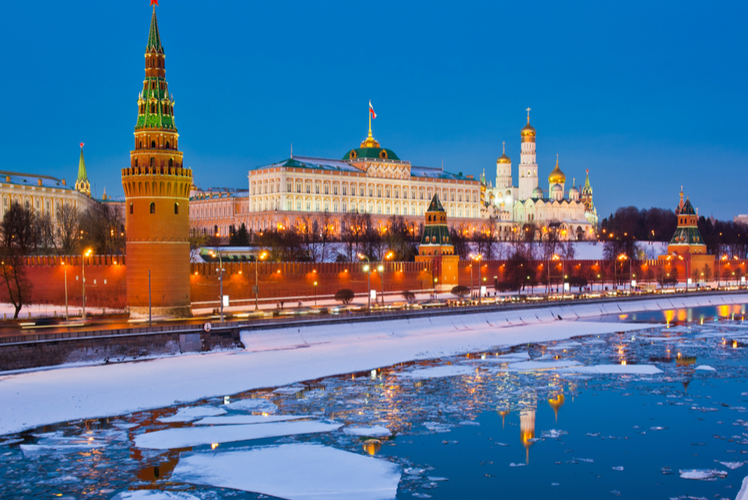 Previously known as Lenin Hills, the name change came about on the eve of the millennium. Located on the right bank of the Moskva River, it’s one of the loftiest vantage points in the city, with an observation deck that stands 85 meters above the river, and about 200 meters above sea level; from here, you get great views of the Moscow skyline, as well as the Luzhniki Stadium, where the opening and closing ceremonies for the 1980 Olympics were held. Had Alexander I had his way, the hills could have looked very different today: he had his eye on its elevated position for the building of the Cathedral of Christ the Saviour, but it was eventually constructed near the Kremlin. 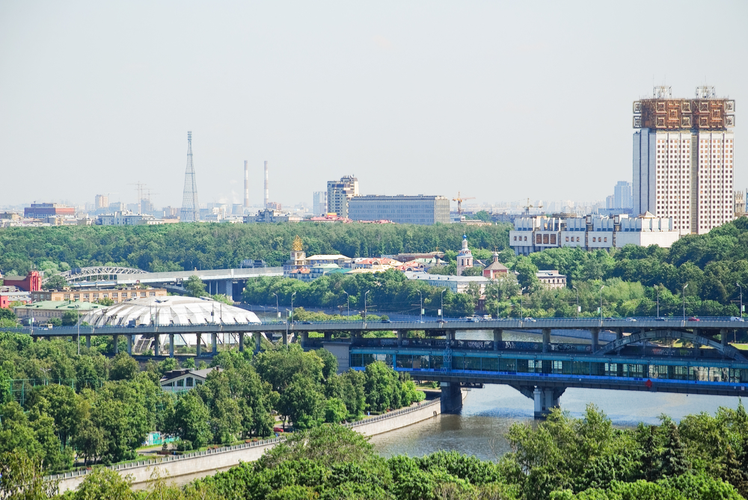 Once upon a time, the Empress Catherine the Great used this as her summer residence; given her reputation as a fearsome and formidable woman, one can only imagine what her reaction to the disrepair and ruin that it fell into under Soviet rule would have been. Since the 1980s, the whole reserve has been restored and extended, and provides a welcoming green space in the busy capital. The buildings, opulently decorated, are also endlessly Insta-worthy, and you can spend quite literally hours wandering the grounds - they cover a whopping 405 hectares, wound through by various waterways, including the Zhuzha River, which springs up from underground. 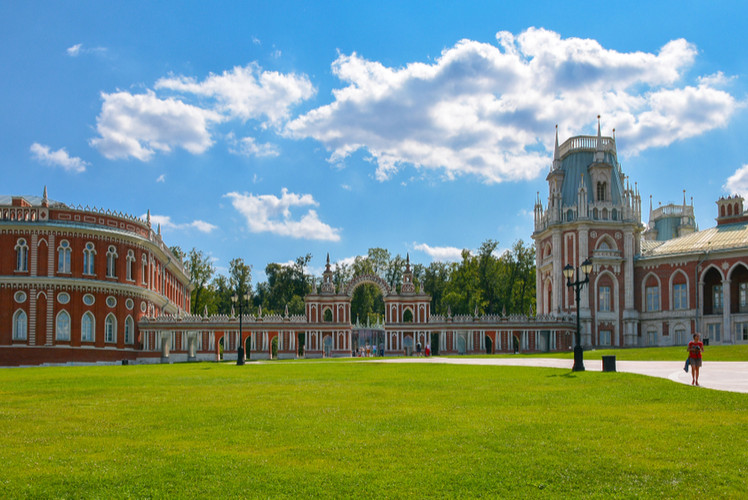 Built in 1967, it used to be that only meteorologists were allowed up on to this tower’s observation deck, but now you can take to the 85-meter-above-ground-level vantage point without having the faintest idea of how to read a weather map. Views are, unsurprisingly, pretty epic even from this level but if you laugh in the face of vertigo, then head on up to the even higher deck which, at 337 meters, is sheltered behind glass. Security is tight, so be prepared for airport-style bag checks - and if the height hasn’t made you too queasy to eat, then the tower’s revolving restaurant serves up decent, if not especially cheap, food, all the while turning twice every 40 minutes to offer you a ever-changing view of Moscow. 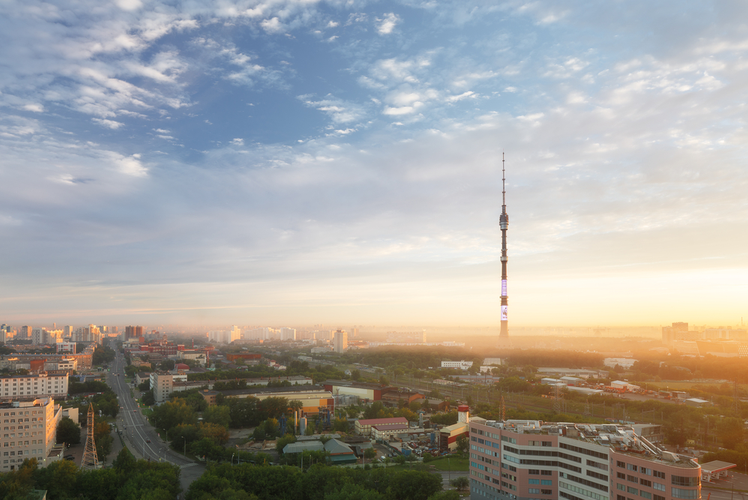 15. Monument to the Conquerors of Space

Such was the Russian confidence in their dominance of the space race that they had started to plan this 350-foot high monument a good three years before Yuri Gagarin’s 1961 orbit of the earth, with construction of the thrusting titanium structure eventually completed in 1964. Topped with a rocket, the stone foundation from which it soars features relief images of cosmonauts and scientists hard at work on expanding Russian knowledge of space; for more insights into how Russia’s relationship with the heavens progressed, head to the Memorial Museum of Cosmonautics, which is also on site and offers interactive and educational displays. 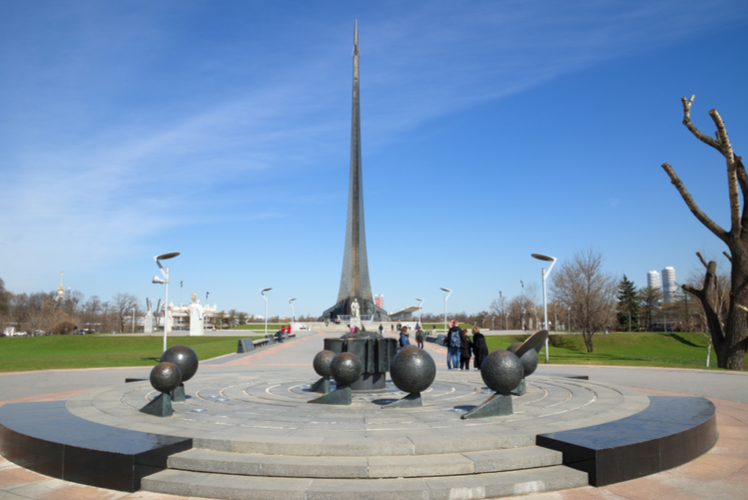