Things to do in Philadelphia

As the Birthplace of the Nation, no city holds such an important place in American history, but there’s a vibrant contemporary scene to be explored here too, with a wealth of eating, drinking, art and performance to be enjoyed - not to mention plenty in the way of retail therapy en route! Read on for some ideas on things to do in Philadelphia

Philadelphia’s role in the independence of America is far to great to be overlooked on a visit, and when there’s 55 glorious acres of National Park devoted to it, why would you want to? Many of Independence’s most beloved icons and landmarks are to be found here, including the 2080-pound Liberty Bell (complete with its distinctive crack) Congress Hall, The Ben Franklin Museum and Independence Hall, where the founding fathers drafted and signed the Declaration of Independence and the US Constitution. If you want to actually gain access to the inside of this historic building, where you’ll see George Washington’s famed “rising sun” chair, you’ll need to grab your free ticket from the Visitor Center any time after 8.30am - the earlier the better, as they get snapped up quickly. 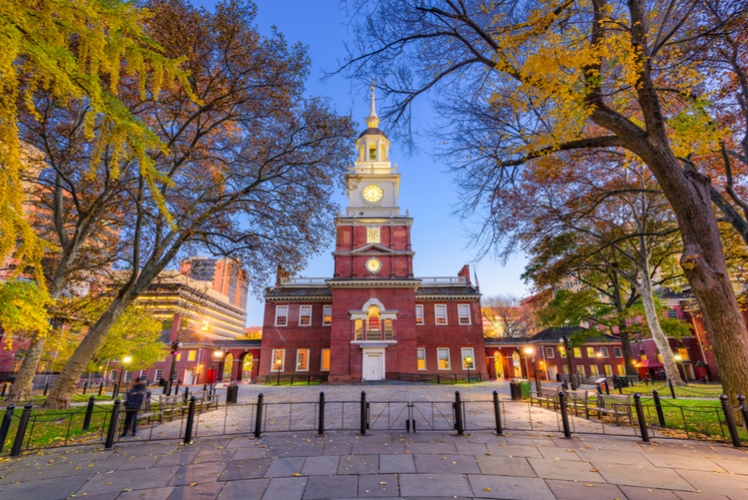 If the journey is worth as much as the destination, then the food is worth more than both of them put together. Or something. This market has been established for over 100 years and throbs with both locals and tourists, who come to fill up on the wares of over 75 vendors. There’s a lot to choose from here, so maybe don’t go when you’re outrageously hungry, or there’s a danger of finding yourself chomping ravenously through mac and cheese, soft pretzels, Pad Thai, Italian pastries and a maple bacon donut, all washed down with fresh squeezed juice and hand-roasted coffee. On second thoughts - yeah. Why not. Go when you’re outrageously hungry. 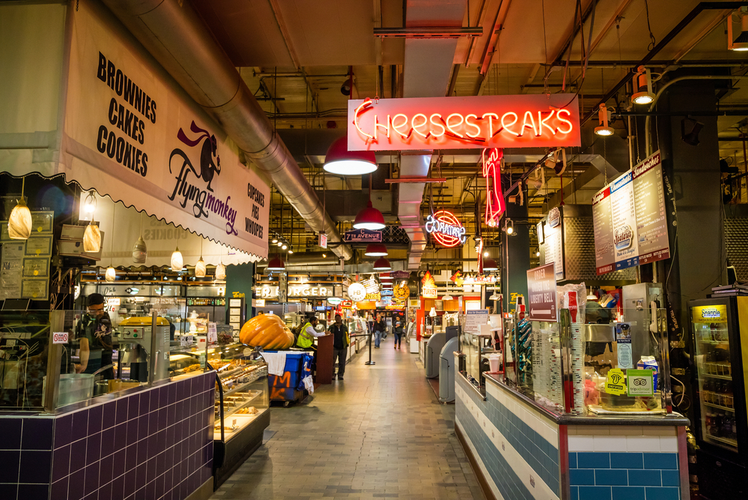 One of five open-space parks throughout the city and built in 1683, this historic space is not only a beautiful spot in itself, but it offers some epic people watching, so that you don’t even have to worry if you’ve forgotten to pack your book or charge your phone. Yummy mummies frolic with their adorable children, hipsters hang out and suited office workers march through scowling with concentration. There are organized events held throughout the year here as well, such as evening performances and concerts, art installations and farmers’ markets. Budget depending, the upmarket boutiques of Walnut Street are also within easy reach - great for a browse even if your cash won’t go the distance. 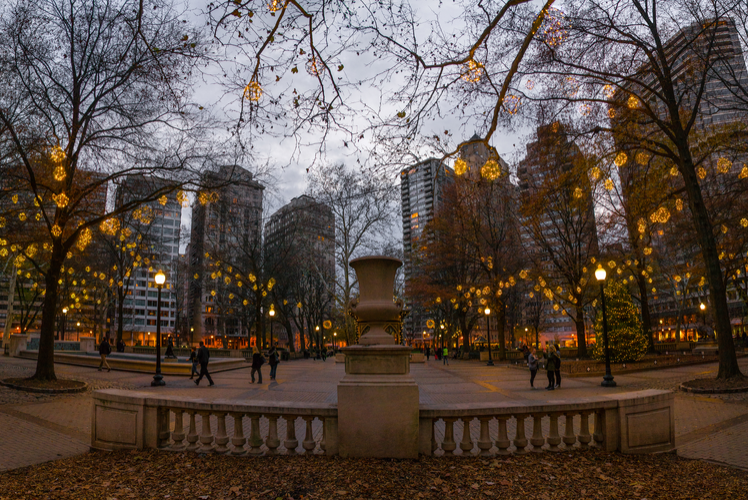 How many times have you been irritated by the limitations on your involvement in an art gallery or museum? By the fact that you’re only as welcome as a person who keeps their distance and sticks to that age-old adage ‘look but don’t touch’? These limitations are especially difficult when you’re travelling with youngsters, so this museum ,with its ‘hands on’ policy, is an absolute delight, offering the chance to get tactile with everything from construction and design to storytelling and art. Regular arts and crafts projects form an additional draw - and the on-site cafe keeps young tummies full and fuelled for learning, with a wide range of healthy eats available. 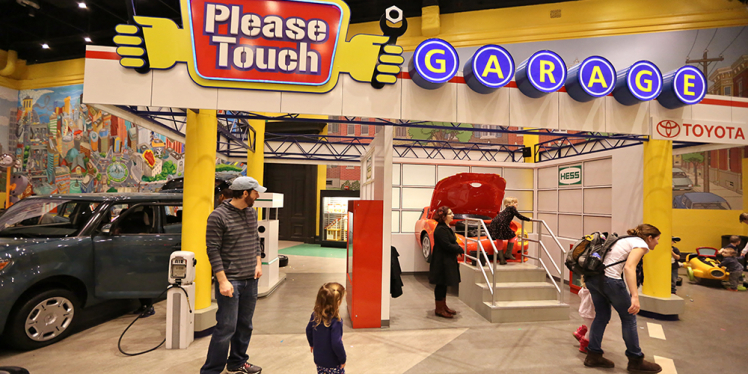 Who could resist the opportunity to follow in the footsteps of Sly Stallone and mimic the triumphant run of his brilliant character Rocky? Even if you’re not a runner, you can shelve the preceding jog and just skip straight to its culmination, up the stairs of the Philadelphia Museum of Art, complete with fist pumping. Don’t forget to take in the stunning view as you go! Afterwards, take yourself back down to the bottom of the stairs and pose for a photo with the bronze statue of the boxer, which was originally created for Rocky III. If you happen to be in Philly over 4th July weekend, head here for the annual free outdoor screening of the movie, complete with look-alike contests and great prizes. 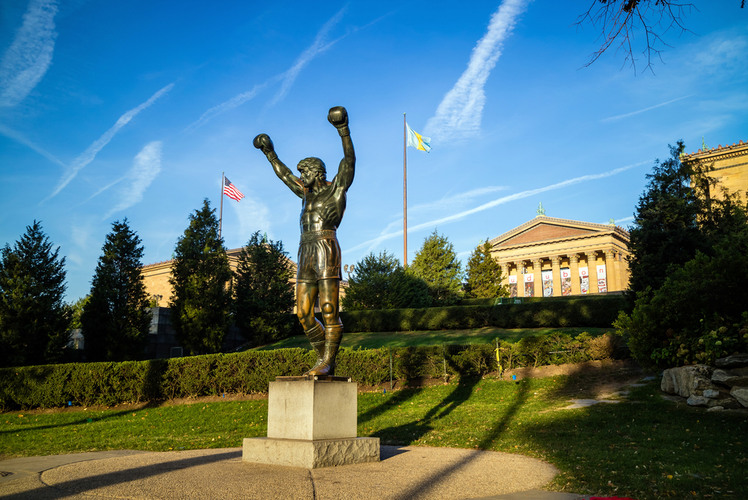 Of course, you can’t just run the steps of the Philadelphia Museum of Art - you need to venture in and view the collections, too! Founded in 1876, this is one of the largest art museums in the country and moved to its current site, based on a design of three Greek temples, in 1928. There’s an impressive selection of Renaissance, Impressionist and Modern Art, as well as a whole room devoted to Philadelphia native Thomas Eakins. Try to plan your visit for a Friday afternoon, as the museum stays open after hours on Friday evenings, with music and cocktails on offer in the Great Stair Hall. 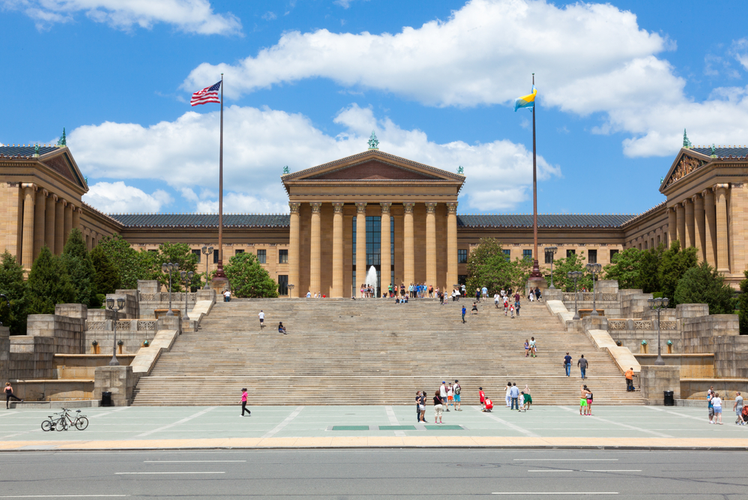 Not far from the Philadelphia Museum of Art, on the banks of the Schuylkill River, you’ll find a tranquil row of 19th century boathouses. A National Historic Landmark since 1987, these 12 lovely buildings have a long rowing history and have produced several Olympic champions from the clubs that occupy them. You can see them at close range if you go for a wander along Kelly Drive Path but some of the loveliest views are to be had at night, when they’re illuminated by dazzling LED bulbs that cast a magical reflection on the evening calm of the river. 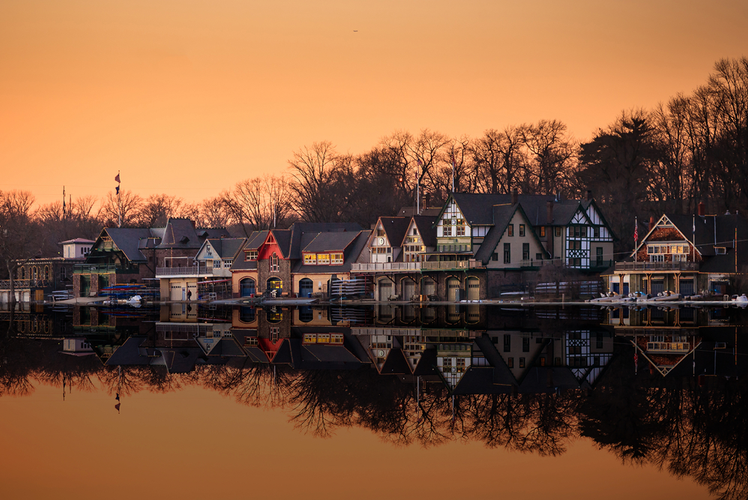 Inspired by the iconic boathouses? Maybe a career as an Olympic rower doesn’t lie in your future, but you can still make the most of the river scenery and warm weather by embarking on a guided kayak tour from either Walnut Street Dock or Manayunk. For a nocturnal experience, there are moonlight tours available too. Children under the age of 8 aren’t permitted on the kayak tours so if you’re traveling with youngsters, opt instead for riverboat ride, which will take you to Bartram’s Garden and allow you to tour the 1731 home of this esteemed family. 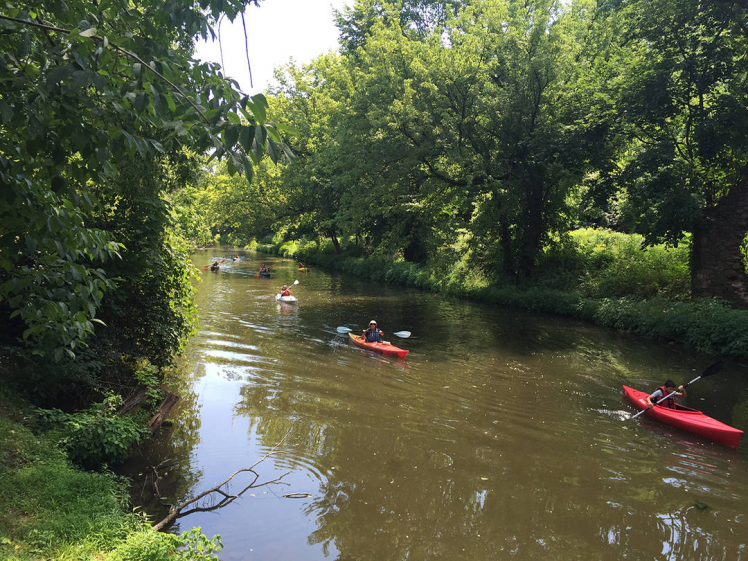 If there’s one type of food you have to try while you’re in Philly, this, the city’s most famous sandwich, would have to be it. What’s it made of? Thinly sliced sauteed steak combined with a choice of cheeses (provolone, American or Whiz) and/ or fried onions - all served up in a long, crusty - ‘hoagie’- roll. There are plenty of places to sample this indelicate delicacy, but for an iconic setting, head to Pat’s King of Steaks, which is located on the corner of Passyunk and South 9th and open 24 hours a day. Its founder, Pat Olivieri is generally credited with being the ‘inventor’ of this sandwich, although a friendly rivalry exists between this joint and Geno’s opposite - make your own decision, and try both.

The Lincoln Financial Field would be well worth a visit even if the Philadelphia Eagles hadn’t won the SuperBowl this year, ending a 52-year losing streak, but it’s even more alluring now! The flipside of this success, of course, is that tickets to games are now pricier and harder to get - but if you do manage to get your hands on some, be sure to show up for the game a couple of hours early, as ticket holders are able to tour the stadium two hours before kickoff. No luck with a game ticket? You can sign up for a reasonably-priced tour on non-game days, too. 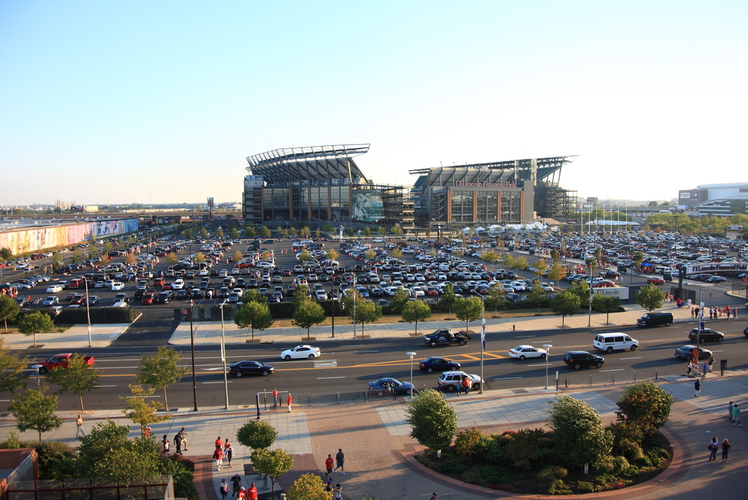 Once the most famous and expensive prison in the world, this is an historical site in its own right, but takes on special gangster significance since it’s where Al Capone was jailed. No longer in use, it features crumbling cell blocks and 30-foot high fortress walls - and is, of course, beset by rumors of hauntings and tortured spirits, with around 60 teams of paranormal experts visiting the site in an average year. You can decide for yourself if they’re on to something on a ‘Terror Behind the Walls’ night tour - otherwise, stick to daylight hours, where you’ll be able to interact with your surroundings in less spooky ways, such as opening cell doors with a genuine set of keys. 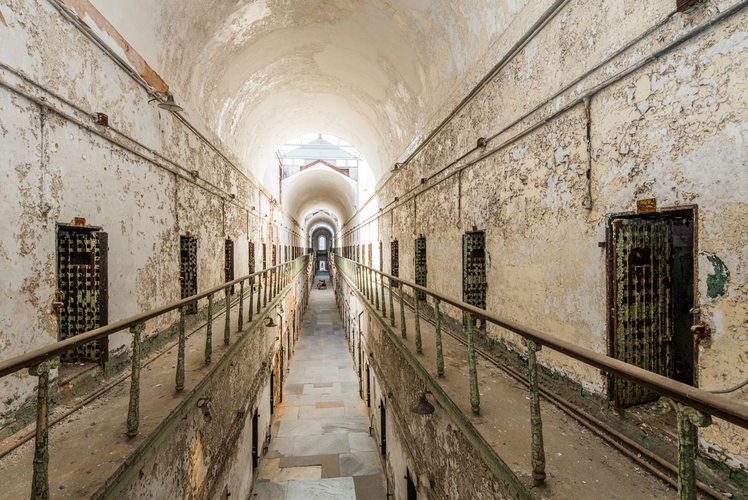 Artist Isaiah Zagar moved to the South Street neighborhood in the 1960s and, committed to making the area more attractive, began beautifying buildings by installing mosaics on the walls. Together with his wife, and joined by a group of other artists and activists, he successfully protested against the construction of a new highway that would have destroyed the neighborhood and continued to create public artworks in the area. You can see Zagar’s mosaics dotted around the city, but for an immersive experience, head to the Magic Gardens; open to the public since 2008, it’s a walkable half-block of tunnels, grottos and walls, all covered with those signature mosaics and found objects. 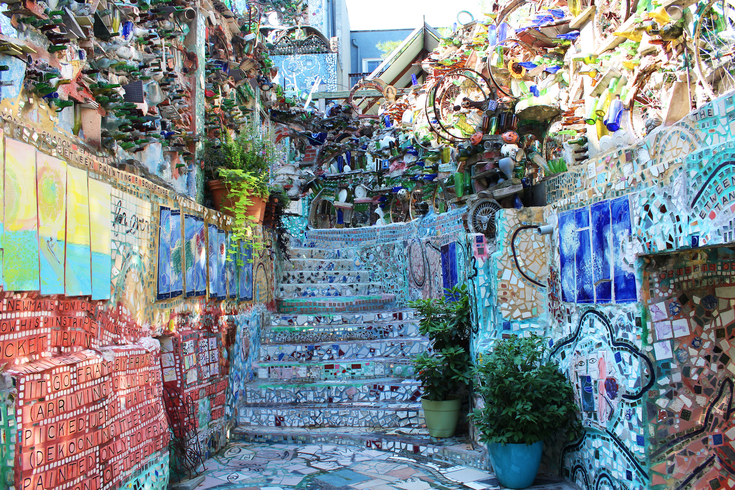 Maybe a New Yorker wouldn’t be keen to acknowledge this fact, but did you know that Fairmount Park is more than twice the size of Central? Sprawling and elegant, there’s something for everyone here, whether your tastes run to outdoor activity or cultural exploration. Six historic mansions, affectionately known as “The Charms of Fairmount Park” are here to be admired and explored; there’s also the vast 42-acre zoo which, as well as being America’s oldest, houses more 1,300 animals. Don’t miss the zen-like tranquility of the Shofuso Japanese House and Gardens, which features a pond garden and waterfall, plus a tea garden, traditional teahouse and bathhouse. 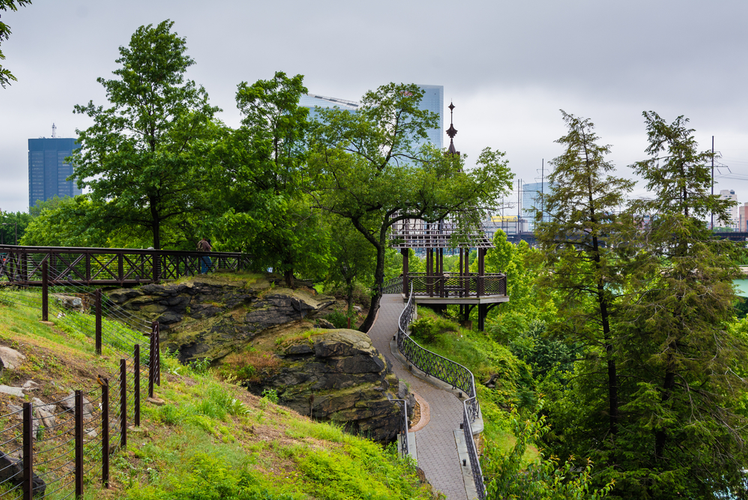 Almost every city worth visiting these days will boast some form of a street art tour but, thanks to Mural Arts Philadelphia, Philly is home to the world’s largest collection of public art. The initiative has been muralling the walls of the city since 1984 and there’s now a whopping 4,000 official murals to be appreciated, including Kenny Scharf’s Philly Chunk Pack. You can get a guided map online for the Mural Mile and then take your time over walking it, but if you want an epic view of Stephen Powers’ iconic A Love Letter For You, a series of 50 rooftop murals expressing various forms of love, take a ride on the Market–Frankford elevated railway. 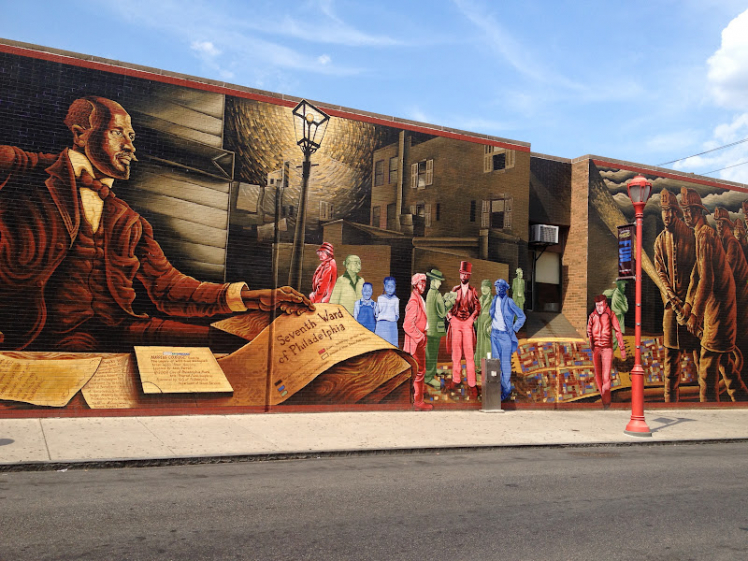 A view from a rooftop and a drink in your hand - there are few better ways to kick back after a long day of exploring, right? This is the bar with the best views over the cityscape, and it’s located on the vast roof of what was formerly a high school in a Southeast Philly neighborhood. Shelve your fondness for spirits for one night: beer and wine are the only alcoholic options available here but there’s a huge variety of the former and quite a decent selection of the latter. There’s also a great variety of non-alcoholic drinks and a tasty range of bar snacks; kids and dogs are welcomed on Sundays only. 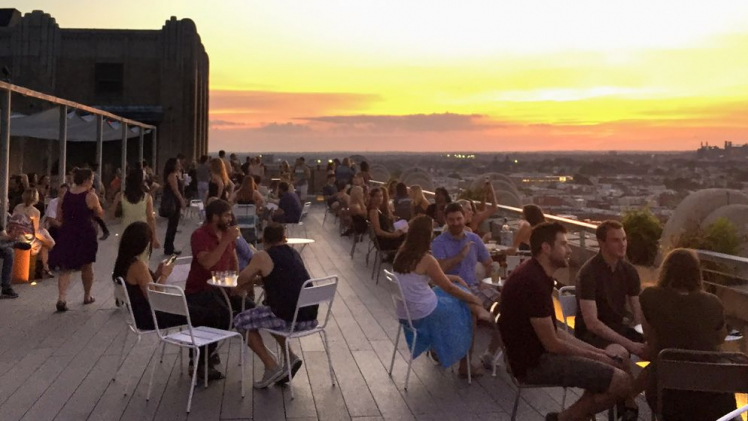