10 Natural Disaster Videos That Will Blow Your Mind

Sometimes, there are things we have absolutely no control over. Nothing reminds us more of this than a natural disaster – an extreme, sudden event caused by environmental factors that kill and injure people and cause extreme amounts of damage. A natural disaster reminds us that nature is the boss and we are left to surrender to whatever is being thrown our way. Perhaps the scariest part of natural disasters is that they can strike anywhere on earth, often without any warning at all. Deadly floods, volcanic eruptions, earthquakes, hurricanes, droughts and tsunamis – all hit unexpectedly, leaving us left to fight back with whatever resources we have. Many times, however, there is no way to fight back. The results are fatal. And the only thing we known is that they aren't about to slow down anytime soon. In fact, it could be argued that these natural disasters are becoming more intense as the years go on. Frequency of earthquakes, heat waves and mega storms have risen considerably in the last few decades. And while scientists, geologists and storm watchers work to help predict such disasters, nothing can truly prepare us for what Mother Nature has in store. Take a look below to see some of the most deadly and scariest natural disasters of all time. 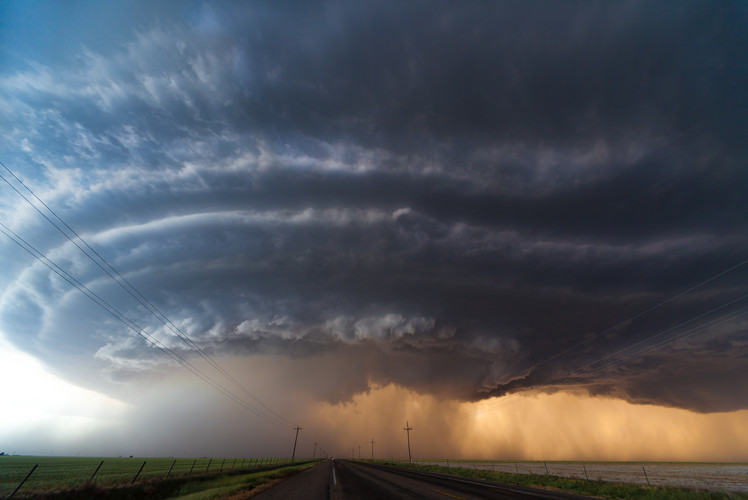 The Chelyabinsk meteor was caused by a near-Earth asteroid that entered Earth's atmosphere over Russia on Feb. 15, 2013 with a speed of 60,000 to 69,000 km/h. The light from the meteor was said to be even brighter than the Sun, up to 100 km away. Eyewitnesses at the time reported feeling intense heat from the fireball that exploded over Chelyabinsk Oblast. The explosion produced a hot cloud of dust and gas and although no one died, about 1,500 people were seriously injured, mainly from broken glass that was blown out of windows. About 7,200 buildings in six cities were damaged. The meteors mass was estimated at about 12,000 to 13,000 metric tonnes and measured about 20 metres in diameter, making it the largest known natural object to have entered the Earth's atmosphere since the 1908 Tunguska event, which destroyed a remote, forested area of Siberia. The Chelyabinsk meteor is also the only known meteor that resulted in such a large number of injuries.

This volcanic eruption took place on September 27, 2014, killing 57 people, the first fatal volcanic eruption in Japan since the 1991 collapse of a lava dome at Mount Unzen. It's also considered the deadliest volcanic eruption in Japan since Torishima killed about 150 people in 1902. Mount Ontake – located about 100 km northeast of Nagoya and about 200 km west of Tokyo - is a popular tourist attraction for hikers and on this date there were several hundred people on its slopes enjoying the beautiful weather. Because there was no warning of what was to come, many ended up buried under ash. It's said today that the volcanic eruption was an extremely rare phenomenon, which made it hard to take precautionary measures.

In August, 2014 ash was sent thousands of feet into the sky after the volcanic eruption of Mount Tavurvur, which is situated just a few kilometres from the township of Rabaul on the island of New Britain in Papua New Guinea. In fact, it was reported that the volcano spewed ash as high as 60,000 feet above sea level. Communities near the volcano were evacuated, while residents of Rabaul were told to stay inside to avoid falling ash. This wasn't the first eruption here. In 1937, Tavurvur and another nearby volcano, Vulcan, erupted, killing 508 people.

Hurricane Katrina is known as the costliest (property damage was estimated at $108 billion) natural disaster and one of the five deadliest hurricanes to ever hit the United States (it's estimated that at least 1,245 people died in the hurricane and subsequent floods). The hurricane originated over the Bahamas on August 23, 2005, and by the time it struck New Orleans on Aug. 29, it wreaked havoc, overwhelming many of the city's levees and drainage canals. There was so much flooding that people had to rush to attics and rooftops for safety. Eventually, nearly 80 percent of the city was under water. While the storm itself did a lot of damage, bringing winds of 100 to 140 miles per hour, its aftermath was said to be catastrophic. Hundreds of thousands of people in Louisiana, Mississippi and Alabama were left homeless about 90,000 square miles was affected. Today, the rebuilding continues.

About 228,000 people were killed as a result of the 9.1 magnitude quake and tsunami that slammed into the coast of Indonesia on Dec. 26, 2004. This disaster displaced billions of tonnes of seawater that raced towards shorelines at fatal speeds. Experts have said that the earthquake that generated the tsunami is estimated to have released the energy of 23,000 Hiroshima-type atomic bombs. The tsunami, considered one of nature's most deadly phenomena, created waves that slammed into the coastline of 11 Indian Ocean countries, dragging people into the sea, drowning people who sat in their homes or on the beaches and demolished property from Africa to Thailand. This tsunami caused waves as high as 50 feet in some places and, according to those who survived, sounded like freight trains or the roar of a jet coming in. Many of the people killed were children or those not strong enough to resist the force of the water. Others were crushed by debris or by the waves smashing them against structures. Once the water calmed, more horror set in as thousands of corpses were found hanging in trees, washed up on beaches and lying to rot in the tropical heat. The damage estimate was just under $10 billion dollars. Today, many of the coastal towns and villages have been rebuilt and the shores of Indonesia and Thailand, which were ravaged by the tsunami, are being repaired.

The Bhola tropical cyclone struck East Pakistan, which is now known as Bangladesh, and India's West Bengal in November, 1970. It is considered the deadliest tropical cyclone ever recorded and one of the deadliest natural disasters in modern times. It killed up to 500,000 people due to the storm surge that flooded much of the low-lying islands of the Ganges Delta. The cyclone formed over the Bay of Bengal on November 8, travelling north with winds reaching up to 185 kilometres. It landed on the coast of East Pakistan in the afternoon of November 12, wiping out villages and destroying crops. In Upazila, Tazumuddin, more than 45 percent of its 167,000 population were killed by the storm. Afterwards, the Pakistani Government was criticized for inadequate relief efforts. Because the water was so shallow, it was almost impossible to distribute supplies to the area with ordinary ships. While helicopters were efficient, only a handful were sent to East Pakistan. Pakistani government delayed requesting outside help for political reason. However, in the end, it's said that the storm resulted in more effective warning systems to be put in place and contributed to the creation of Bangladesh.

The 7.0 magnitude earthquake that shook Haiti on Jan. 12, 2010 is said to be the country's most powerful in more than 200 years. It killed more than 200,000 people and left another 1.5 million homeless. The quake, which hit about 25 kilometres southwest of the Haitian capital of Port-au-Prince, destroyed thousands of homes, schools and hospitals, as well as the U.N. Headquarters in Port-au-Prince, the presidential palace and the main penitentiary. Thousands more were killed in October of that year in a cholera epidemic that spread across the country. After the quake, efforts by aid organizations to provide medical assistance, food and water were hampered by the failure of the electric power system, loss of communication lines and blocked roads. In fact, a week after the event not a lot of aid had reached those in need. Because many hospitals were no longer usable, survivors were forced to wait days for treatment and, because morgues had reached capacity, corpses were stacked along the streets. Today, tens of thousands of people are living in tents and makeshift homes.

This 7.5 magnitude quake, also known as the Great Tangshan earthquake, was a natural disaster like no other. In fact, the quake, which erupted on July 27, 1976, is believed to be the largest quake of the 20th century by death toll – officially the toll was reported at 242,000, but some say it may have been as high as 655,000. Many of these deaths occurred from the collapse of unreinforced masonry homes where people were still sleeping. Another estimated 700,000 people were injured and property damage was extensive. As if that wasn't bad enough, the quake was followed by a 7.1 magnitude aftershock 16 hours later, which caused even more damage and, sadly, more casualties. The quake either completely destroyed or severely damaged more than 85 percent of unreinforced homes, multi-storey buildings and other structures in Tangshan. Roads, rail lines, bridges, dams, wells and other infrastructure were also damaged.

The Jan. 23, 1556 earthquake in Shaanxi province in northern China is said to be the deadliest earthquake ever recorded. Estimated at a magnitude of 8, the quake hit Shaanxi and the neighbouring Shanxi province to the east – killing or injuring about 830,000 people. The death toll was so high it was thought to have reduced the population of the two provinces by about 60 percent. While the quake lasted only seconds, it did enough destruction to level mountains, change the path of rivers, ignite fires and cause major flooding. In some areas, crevices as deep as 20 metres opened in the earth. Massive landslides also occurred, which led to a lot of deaths occurring in mountainous areas. Other people died after being crushed by falling buildings. This led to future buildings being made of softer, more earthquake-resistant materials, such as bamboo and wood.

One of the worst floods in human history is said to have occurred in 1887, when the Yellow River began to overrun the dikes in Henan Province. The flood covered 50,000 square miles and affected eleven large towns and hundreds of villages. In total, about 900,000 people died and another two million were left homeless. And this isn't the first time this river has had disastrous outcomes. In fact, the river, also known as the Huang He, is famous for its devastation, since it's said to have flooded about 1,500 times since the 2nd century. In 1931, 34,000 square miles of land was affected, leaving about 80 million people homeless. It's estimated between 850,000 to 4 million people died by the flood and the resulting disease and famine. In 1938, another flood occurred, killing between 500,000 to 900,000 people.

Comment on 10 Natural Disaster Videos That Will Blow Your Mind