8 Must See and Do's in Bordeaux

Bordeaux’s wine-making heritage is known far and wide, and although the region is absolutely deserving of that reputation, the vineyards often overshadow the other delights of the city. In fact, Bordeaux sits on a fresh and sunny edge of the country, with brisk Atlantic breezes and an immensely varied terrain to keep life interesting. Located in the center of Poitou and Aquitaine (a region with a military history and deep Roman roots), Bordeaux boasts a stunning collection of 18th century architecture and a delectable menu from the sea to the west and the pastures to the right. Don’t miss these eight stops on a trip through this uniquely historical city and its fruitful surroundings. 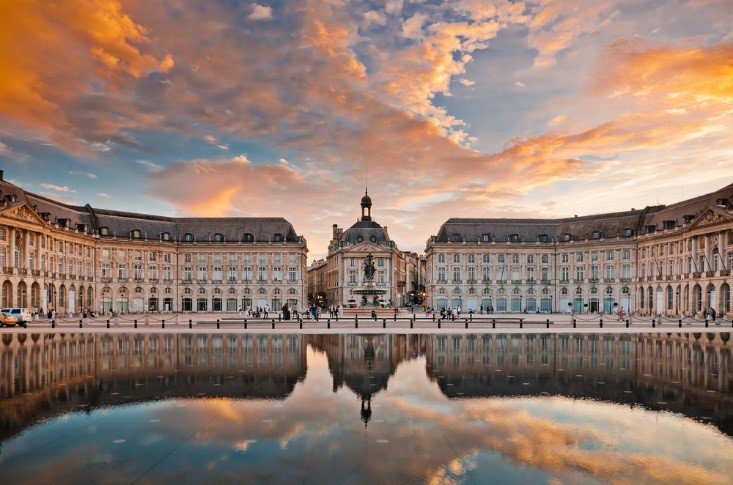 At the foot of Bordeaux’s old town you’ll find the stately and charming Place de la Bourse, a square flanked by two gigantic manors, the Palais de la Bourse and Hôtel des Douanes, some of the most pristine examples of late 18th century architecture. The beautifully symmetrical square has become one of the key images of Bordeaux, with a grandiose silhouette that beckons photographers through the day and night – the two perspectives are equally atmospheric. A sprawling, shallow pool (the Miror des Quais) stretches out in front of the complex to complete the scene, and on still days, the reflective effect is mesmerizing. 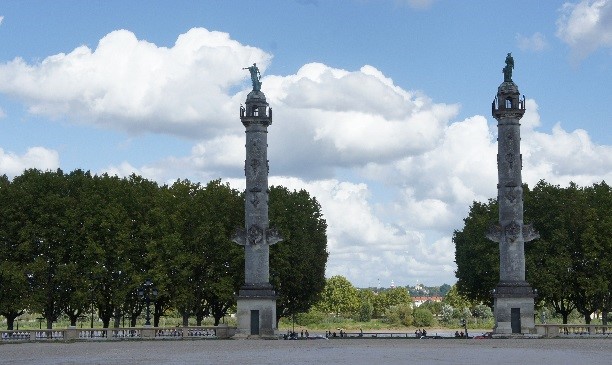 A 15th century castle used to stand on this site, but today the Esplanade des Quinconces is a spectacular tree-lined space that invites visitors to stroll through the wide open avenue. With 31 acres of forest and pathway, it’s one of the largest city squares in Europe, with columns and monuments dotting the spaces to commemorate significant French figures and celebrate national virtues. At the north end of the Esplanade stands the CAPC Musée d’Art Contemporain, a beautifully converted 19th century warehouse housing a selection of contemporary art, and around the perimeter you’ll find plenty of shops, bars and cafes to enjoy. 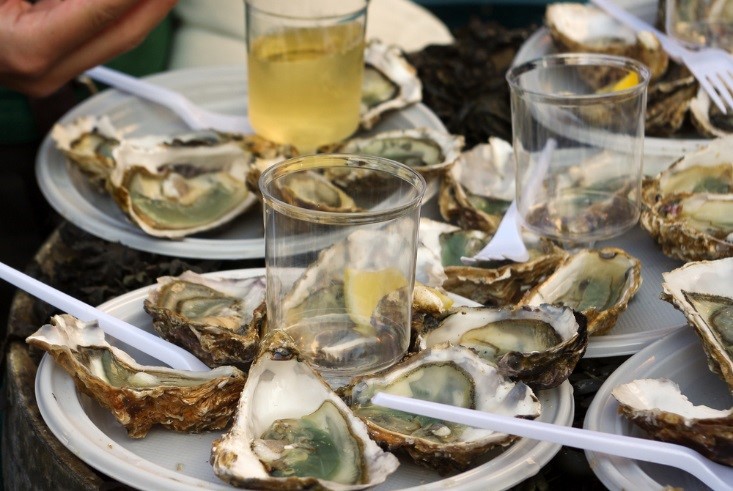 French Saturday markets are some of the best in the world, celebrating fresh local ingredients with pride and happy indulgence. The Marché des Capucins in Bordeaux is no exception, and a wonderful opportunity to sample the region’s formidable wine with fresh oysters pulled right from the Atlantic. It may seem a bit bizarre to sip a glass of dry white while you slurp down a few oysters at a rickety table in the brisk morning air, but rest assured it’s an authentic French experience – perhaps even a rite of passage into their culinary coterie. There’s ample opportunity to taste other regional products, so set aside some time to stroll through the stalls. 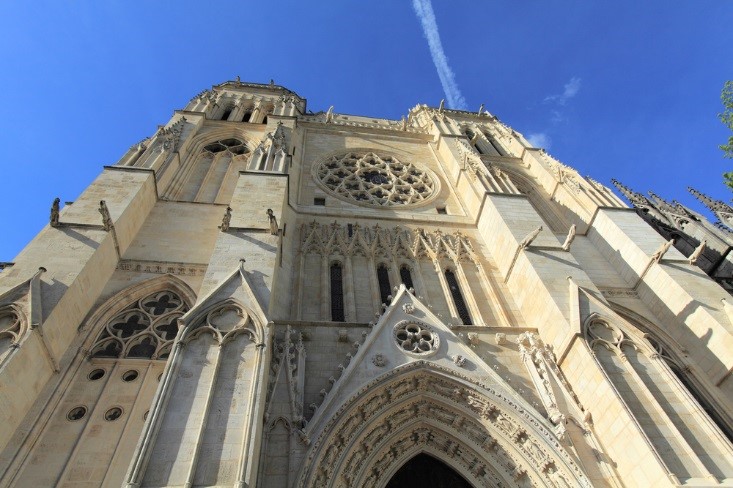 Bordeaux’s grand cathedral dates back to the 11th century, when building commenced on the nave, but the building grew through later centuries and now shows off a range of architectural styles. A good deal of the façade and the choir was completed in the Gothic style through the 14th and 15th centuries, and there is a series of excellent medieval sculptures depicting the Last Judgement. If your legs are up to it, you can climb the 231 narrow steps of the Tour Pey-Berland to take in the impressive panoramic view of the city, and the rolling vineyards that lay beyond. 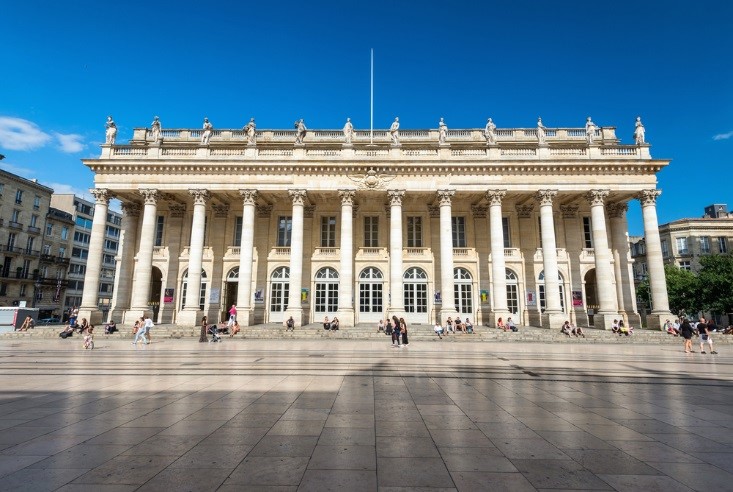 An 18th century architectural marvel, the Grand Théâtre brings together sprawling ceilings, multi-level auditorium and a spacious stage in a lavish setting with great acoustics. The glamourous main staircase served as an example for the Paris Opéra, and the interior is lined in blue and gold, with gilded columns extending up from the base of the auditorium. The building is home to both the Opera National de Bordeaux and the Ballet National de Bordeaux, hosting a selection of world-famous musicians and dancers every year. For an unforgettably opulent evening, reserve tickets to a concert, opera, or dance performance during your stay. 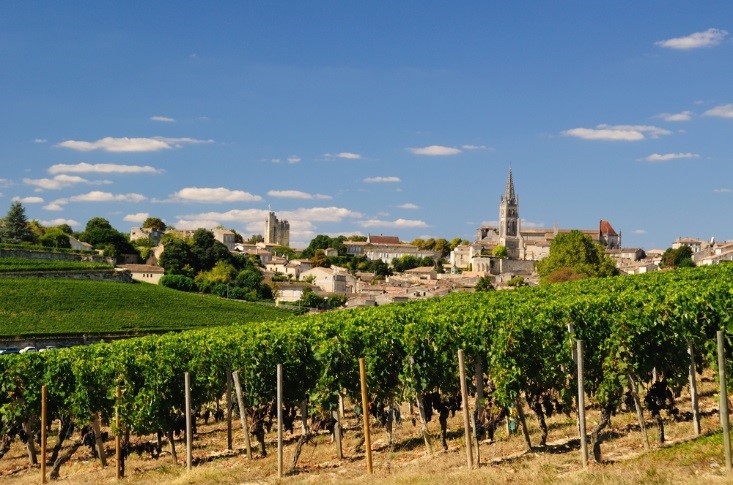 A short trip east of the city brings you to the idyllic and absurdly historical wine-making region of St-Émilion, where you will be treated to a taste of the world’s finest vintages – and some other noteworthy sites. In the village itself, medieval houses and facades dominate the little lanes, but the biggest highlight is much older: a church that was literally dug into the chalky cliff by followers of the hermit Émilion (the town’s namesake). The opening to the cave is modest and unremarkable, but the cavernous interior with soaring stone ceilings held up by massive pillars is a jaw-dropping architectural feat. Head just outside the town, and you’ll soon be on the steps of some of the grandest winemaking châteaux in the nation. 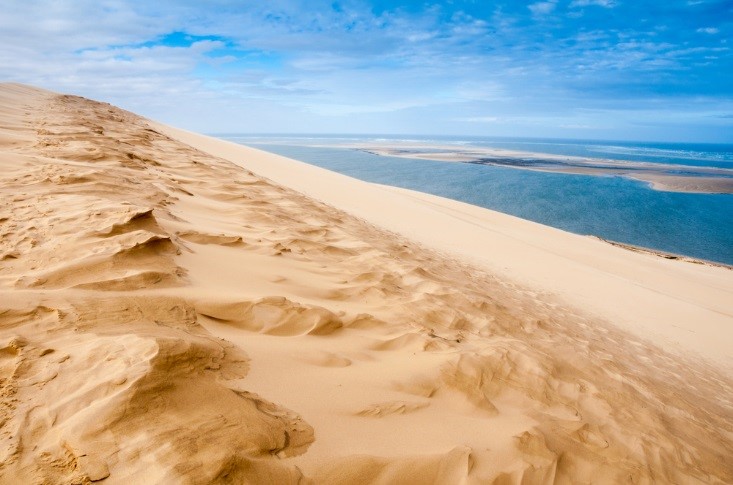 If you head west out of Bordeaux, you’ll soon stumble on the stunning lagoon known as the Bassin d’Arcachon. This is the gem of La Côte d’Argent, a protected area of beautiful sandy beaches, bird sanctuaries, and seaside villages. If you’re an oyster fanatic (or have yet to taste the briny mollusk), you won’t find a better stop in France: the bay is lined with oyster fishing villages, where you can sample the freshest high-quality oysters as they have been enjoyed for centuries. Sailing is another big draw, but there’s lots to see and do on land, too. Check out the Dune du Pilat, a two mile long sand dune that’s over 300 feet high (the largest in Europe), where you can see the flocks of migratory birds fly overhead as they make their way to the nearby bird sanctuary. 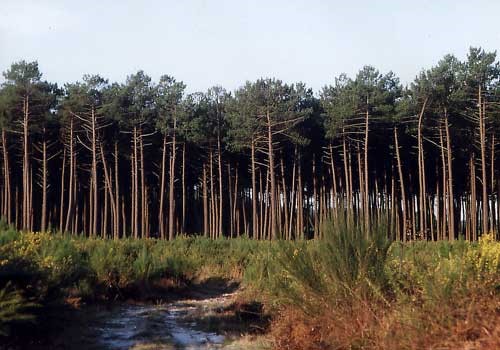 Certainly a day trip from Bordeaux but worth the detour, Les Landes is a huge forested area, almost completely blanketed by pine trees, and very sparsely populated. The interesting feature here is the geological history: a marshy, untenable piece of land for centuries, Les Landes hosted only shepherds with their flocks until the 1500s, when a newly-built canal augmented the flow of the river Adour. After that, the pines were planted, the shepherds displaced, and the land transformed into a wealthy lumber region. Today, the lush pine forests remain, but the Écomusée de la Grande Lande has restored a section of land as it was before the pines, when shepherds navigated the marshes on stilts and lived in “auberges landaises”, small wooden houses with steep sloping roofs.

Bordeaux sits away from the elegant Loire, historic north, and flashy Mediterranean regions of France, which means it’s often ignored. Take advantage of the relatively small crowds of tourists and wealth of food and drink with a late summer or early autumn visit, when the grapes are nearly ripe, the air is fragrant, and the weather is still warm and welcoming.