8 Must See and Do's in Prague

Prague has a staggering amount of social significance, and preserved mementos from every era within its stony streets. Ornate bridges arch gracefully over the river Vltava, and the Old Town stands in all its medieval and Gothic splendour, practically untouched for centuries. The castle – a proud reminder of Prague’s golden age – overlooks the red roofed village houses and tiny restaurants that have seen some of Europe’s most legendary figures and movements, from Kafka to the stirrings of communism and Havel’s Velvet Revolution. Indeed, there are so many sites, era, and artifacts to take in, it can be difficult to craft a good itinerary. Begin with these eight sites in the heart of Prague that unveil the history and significance of this majestic and mysterious city. 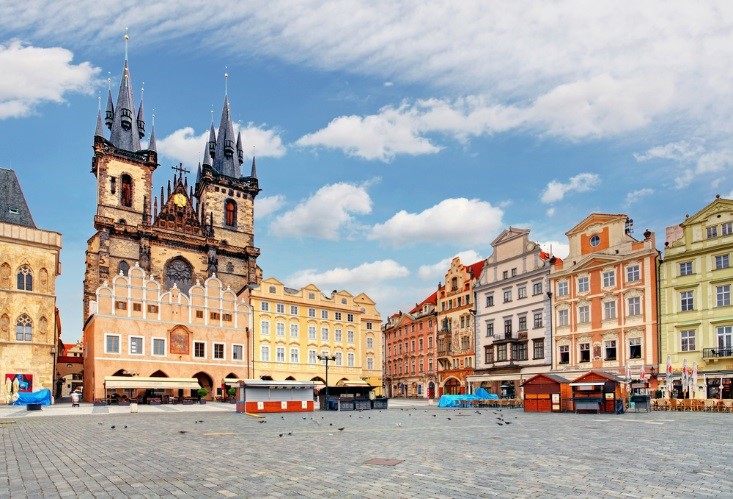 No visit to Prague could ever be complete without a visit to the Old Town Square, a collection of colorful architecture from different eras, including medieval palaces, Rococo facades, and Art Nouveau ministries. Walk through the 11th century Powder Gate to the wide cobbled square, where you’ll find a number of cafes, shops and galleries lining the sides, and small arched alleys leading out from the center. With stone figures, gilded sculptures, and painted crests adorning each stretch of building, it’s easy to ignore the crowds and take in the historic (and somewhat chaotic) beauty of the architecture. 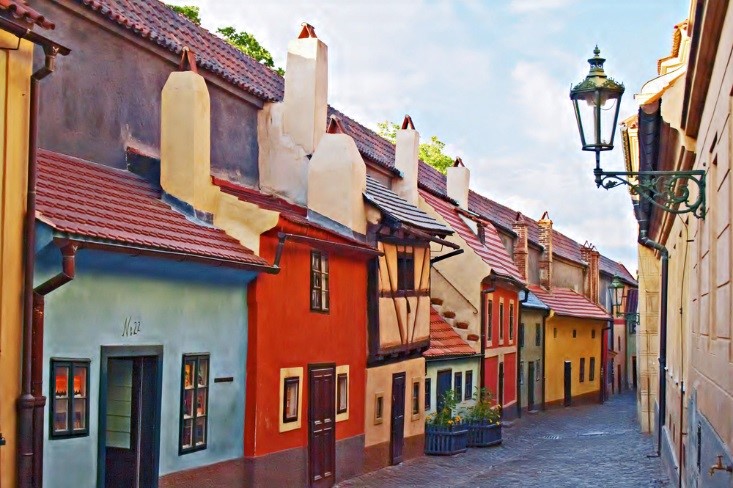 The city’s emblematic castle is arranged in a ring, with a wide inner courtyard that houses galleries, gardens, and the monumental St. Vitus’s Cathedral. There are clear Renaissance, Gothic, Baroque, and Neo-Classical elements vying for space among the palatial walls, and the towers that still stand are now museums. The walk up the hill to the castle affords a lovely view of the city below, and entering through the first, second, and into the third courtyards feels stately and ceremonial. Lining the north edge of the complex, the little Golden Lane is a treat to stroll down: these tiny, half-timbered cottages are where the castle’s guards and gunners lived in the 16th century, and now host a selection of traditional artisans. Duck under a little doorway to check out their wares. 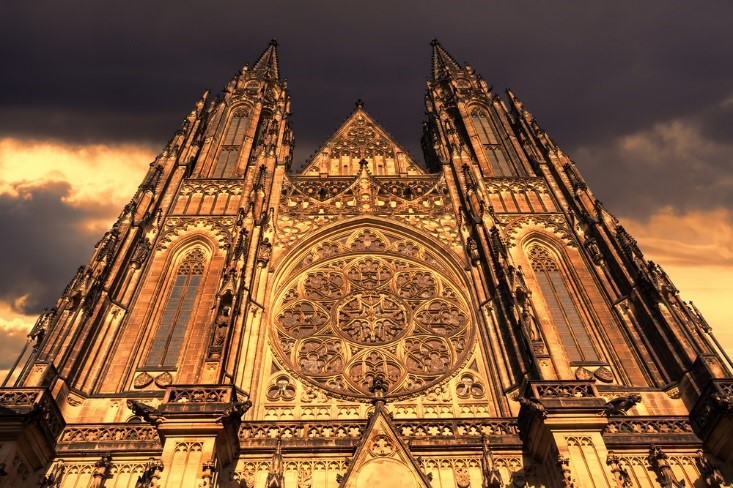 A towering Gothic marvel, work began on St. Vitus’s Cathedral in the 14th century, and a series of architects continued the work until the Hussite Wars interrupted the project. When political and social order was restored, energy turned back toward the Cathedral, which was finally finished in the 19th and 20th centuries. A diverse collection of artists and architects added their personal touches over the course of the build, and the statues, etchings, and stained glass (notably, The Rose Window) on the façade are as beautiful as the crown jewels and gem-lined tombs that lie within. King Wenceslas is interred under the incredible Gothic vaulting and flying buttresses, and the bronze ring on the chapel’s north portal is rumored to be the one that Wenceslas clung onto when he was murdered. 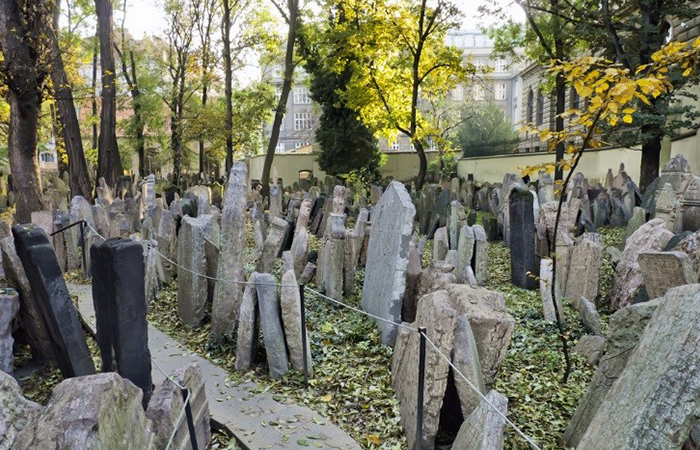 The Jewish Quarter of the city is charming, but teeming with history, stoic tradition, and accounts of grim events. The Old Jewish Cemetery is one of the most remarkable sites in the area: for over 300 years, this was the only burial ground that Jews were permitted to use. The uneven ground and leaning tombstones are testaments to the staggering number of bodies buried on top of each other – up to 12 layers deep, in some places. A guided tour will help you to spot the important rabbis, nobleman, and other significant figured buried here, along with their family or professional symbols etched in the stone markers. The adjacent Pinkas Synagogue and Museum of Decorative Arts are both worth a look once you’ve circled the solemn cemetery. 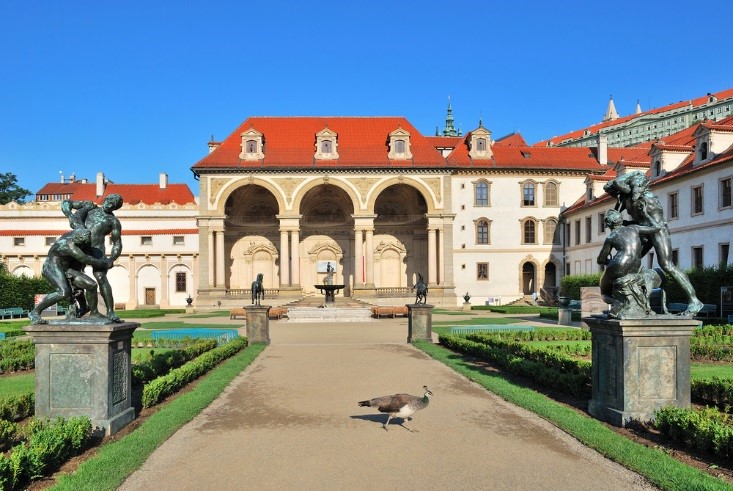 This grandiose palace was the lofty goal and ultimate demise of military commander Albrecht von Wallenstein, who intended to eclipse Prague Castle with his massive new personal palace. Wallenstein bought 23 houses, three gardens, and a brick kiln in order to lay the large foundation for his mansion, and a team of Italian artists and architects were commissioned to decorate the gilded halls and rooms with elaborate frescoes and portraits. Today, the Czech Senate calls the palace home, but both the building and the surrounding gardens are open to the public. 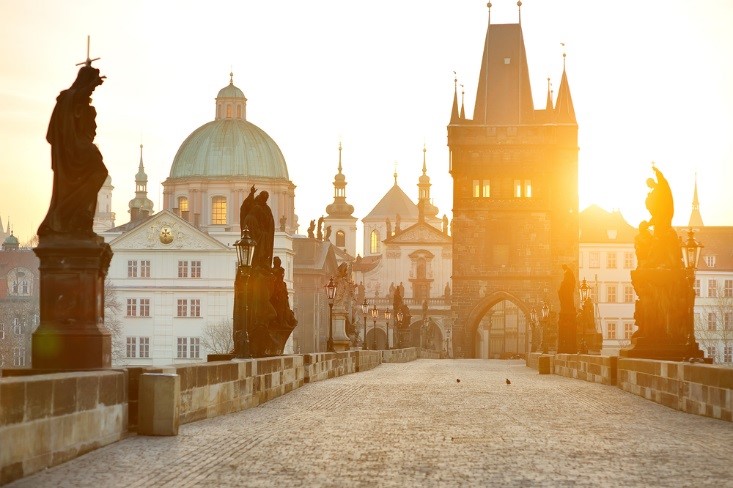 This remarkably wide 14th century bridge connects the Old Town with the Little Quarter, and is the central symbol of Prague. The bridge is adorned with over a dozen statues, and though most are replicas (the originals are kept in the National Museum), they are still impressive sculptures that tell important tales of Prague’s history and principles. The saints lend a serious and thoughtful atmosphere to the walk across the bridge, and there’s evidence of their ongoing authority: take a look at the engraved picture under the statue at the Little Quarter end, and you’ll see the small figure of St John Nepomuk rubbed bright by passersby who touch it for good luck. 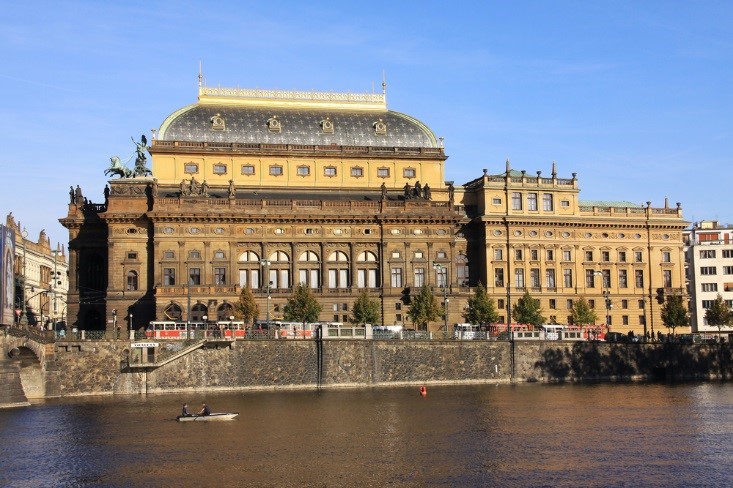 The National Theatre in Prague’s New Town is the seat of the Czech cultural revival, with an impressive Neo-Renaissance design that was completed in 1881 – and after it was destroyed by fire, recreated with the efforts of all the best Czech artists of the period. A gold and blue roof sits on top of the palatial auditorium; on the inside, you’ll see the ceiling is adorned with painted figures representing the arts. In fact, the elaborate decoration reaches into every corner of the place, from the sprawling fresco on the Lobby Ceiling to the red velvet-lined President’s Box and golden stage curtain. 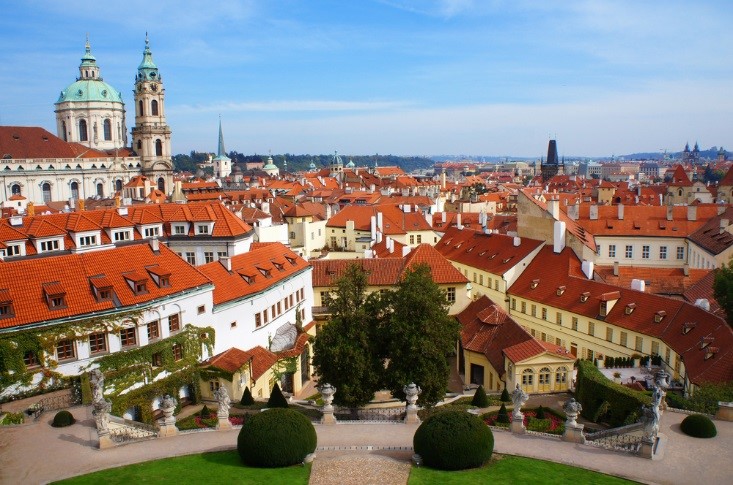 The cluster of streets and gardens along the slopes below the Castle make up the Little Quarter, a particularly well-preserved area of the city. The Church of St Nicolas is at the heart of the neighborhood, and life goes on around it as it has for centuries: the Grand Prior’s millwheel still turns, and music still rings out from the nearby churches and palaces. The Baroque mansions that once housed nobility have been turned into embassies, but the steep and narrow streets that carve paths through the quiet area are original, and anchor the city in a romantic past. Take a look at the old house signs, various painted symbols that would have indicated the family’s profession.

There’s a good deal of art in this city, and indeed, it is one of the most telling and treasured aspects of Prague. Though the Renaissance and Baroque pieces get a lot of press, more modern movements are represented, as well: this was the home base of Alphonse Mucha, the great Art Nouveau painter and forefather of poster art. The Mucha Museum, Municipal House, and the Prague Museum are important stops to gain a better understanding of the evolution of Czech art and creativity through the centuries.