15 Beautiful Places and Cities To Visit In Italy

There are so many incredible places and cities in Italy; where to begin? As a country that allures and inspires just about all who encounter it; Italy is the source of some of the world’s most incredible art, culture and history, but its natural attractions are just as dazzling as its man-made ones.

Venice never fails to bedazzle anyone who visits it. The faded colors of the architecture reflected in those iconic canals, through which gondolas lazily glide, the dazzling splendor of St Mark’s Square, the absolute lack of traffic or exhaust, the incredible quality of the light, enhanced by those watery passages - it’s utterly otherworldly. Spend your days wandering the narrow lanes and crossing the bridges that span the canals; culture vultures can feast on the art and architecture, and hedonists should plan their visit to coincide with the gilded masks, spectacular headpieces and all night partying of February’s Carnevale. Take a day trip to Burano which, with its houses painted in a candy store of colors, is Instagram heaven. 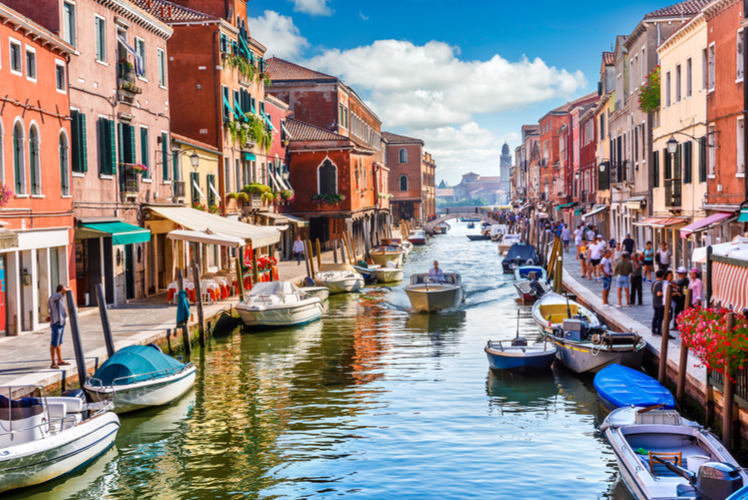 Yes, it’s got a slight down-at-heel, gritty character to it, which often causes people to compare it unfavorably to glossier cities like Florence, but there’s an authenticity to Bella Napoli that makes it wonderfully compelling. Join a game of football in a square, stuff your face with some of the best pizza you’re ever likely to taste, marvel at the nearby Mt Vesuvius and take a day trip to the ancient ruins of Pompeii. If you have a taste for the macabre, check out the piles of human bones at the Fontanelle underground ceremony, making sure that you end your day on the more cheerful note of enjoying an aperitivo in Piazza Bellini, where the locals throng. 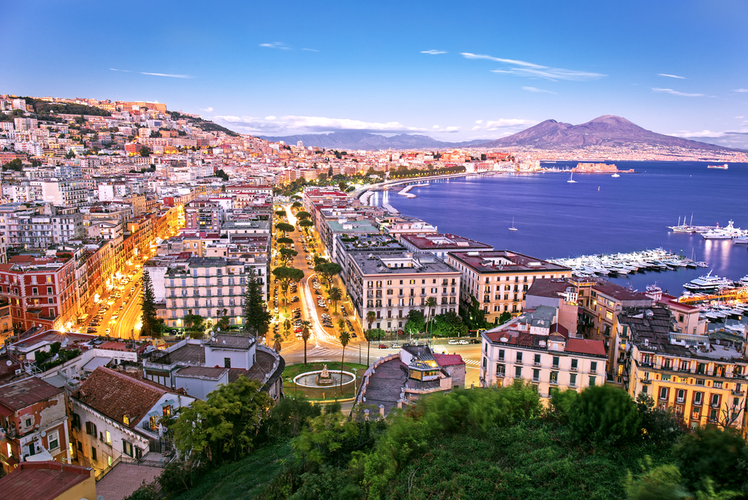 Trulli are stone huts with conical stone roofs; charming and somehow fairytale-like, they’re frequently seen in the olive groves in the Valle d’Itria countryside. Alberobello, however, is the only place where you’ll see an entire town comprised of trulli, each of them bearing a pointed grey limestone roof atop a squat and whitewashed body. Listed as a UNESCO World Heritage site, there’s no getting away from the fact that it’s a touristy spot, but it’s so unique that it’s one hundred percent worth braving any crowds. Avoid May to October for the quietest experience and don’t be disappointed when you see the residents - they’re regular people, not the fairy folk you may be expecting. 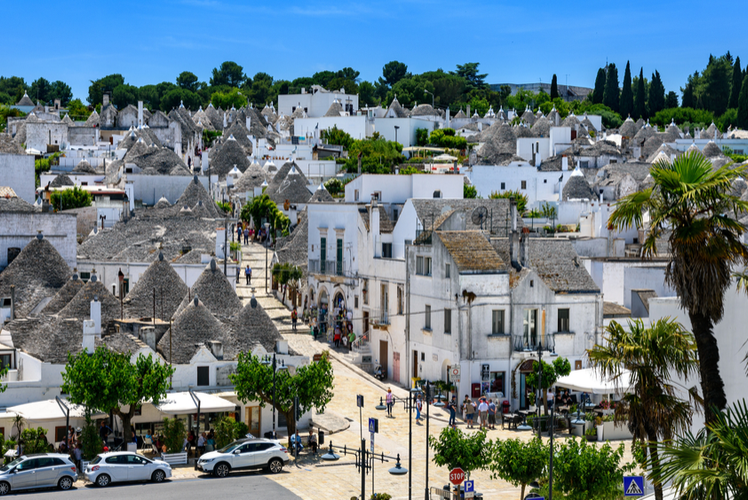 As the capital of the region and the home of an international airport, you’re likely to encounter Perugia on your way in to Umbria, but before you go tearing off to explore vineyards and hunt for truffles (although you should absolutely do this) allow some time to explore this beautiful university town, which dates back to the time of the Etruscans and is chock-full of artefacts and history. There’s something mind-blowing about seeing university students casually leaning against the soaring splendor of the 2000-plus-year-old Etruscan Arch - it’s incredible to think that people just live among such antiquity. Spend some time strolling the elegant piazzas and make a beeline for the Corso Vannucci in the evening for the best passeggiata-style people watching. 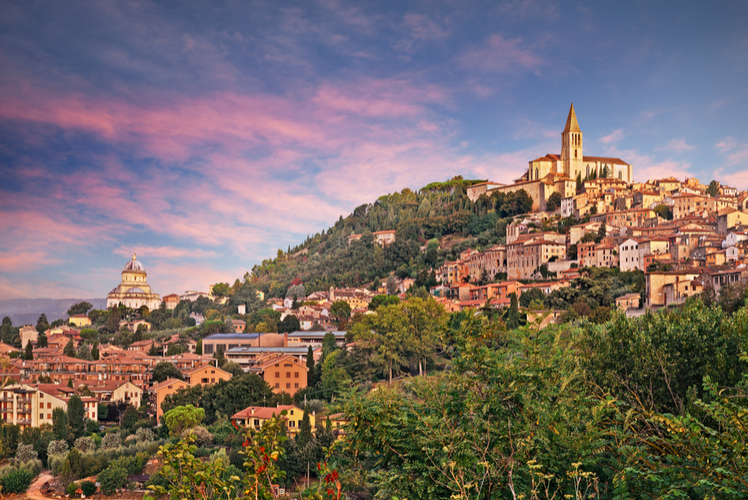 Beautiful inside and out is a description often given to lovely people, but it’s really rather apt for Florence, too - this is a city which is as stuffed with wondrous beauty, by way of art, interiors and antiquities, as it is glorious to behold from the outside. With its enormous red dome, the Duomo is, of course, one of its most recognizable and incredible sights, but there are smaller scale and lower key beauties to be seen as well - every cobbled street seems to open up on to a new and glorious scene! Head to one of the city’s many rooftop bars at sunset for the incredible sight of the city’s jumble of terracotta rooftops, made deeper and more dramatic by the light. 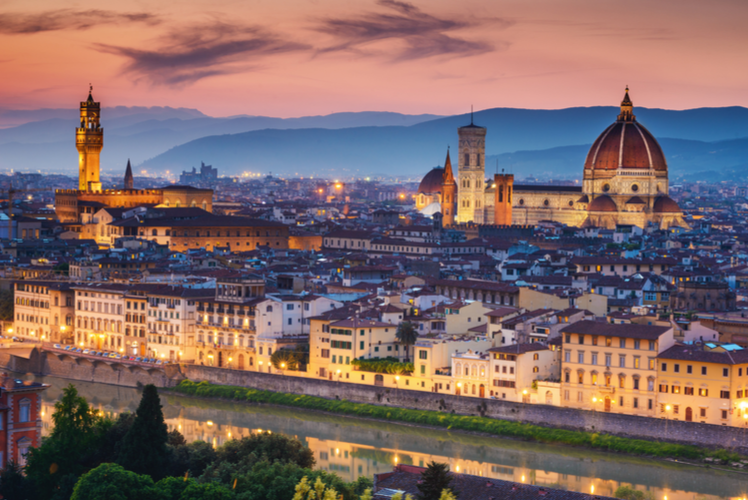 Too obvious? Cliches are often cliches for a reason - because there’s something inherently true about them - and Rome is an excellent example of this. Put simply, it’s an unmissable Italian destination, with so much history and architecture that it’s can be a little overwhelming if you try to tackle it in the heat and crowds of the summer. Plan your visit instead for Spring or Fall; with sights like the Colosseum, the Piazza Navona, The Trevi Fountain, The Spanish Steps and Campo dei Fiori to be explored - not to mention the Vatican, which could easily occupy an entire vacay on its own! - you don’t want to feel that you’re not getting the most out of your days. Head over the river, to the Trastevere neighborhood, for a slice of local authenticism; it’s a charming area in which to get happily lost. 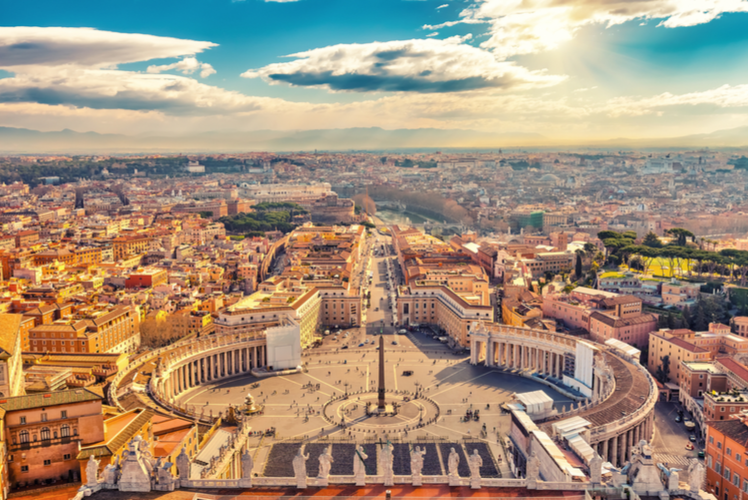 Often in the shadow of its flashier counterpart, Lake Como, Lake Iseo is absolutely lovely. Ringed by verdant mountains, down the sides of which villages appear to tumble, its presence in the region is one of the primary factors necessary for the growing of the grapes for Franciacorta, the grapes from which the region’s sparkling wine - also called Franciacorta - is made. When you’re not wandering the wineries and sampling their wares, take a boat ride to check out the lake’s three islands; two of these are privately owned (the dream!) but the third, Monte Isola, is the largest lake island in Europe and offers lots of charming villages and unspoiled landscape to explore. 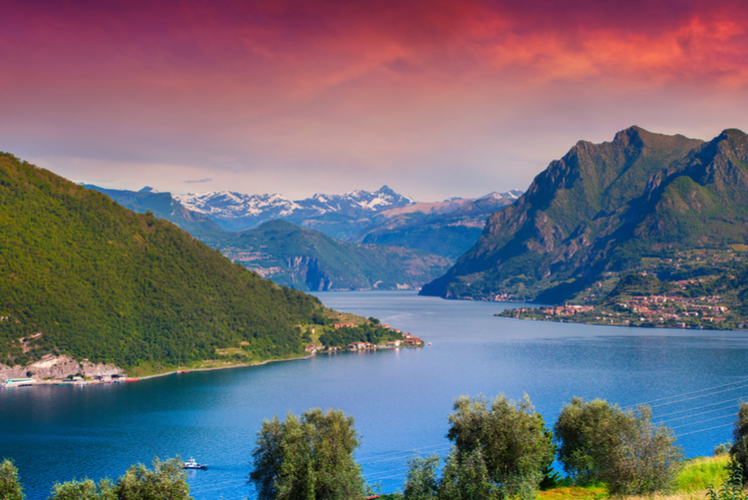 The Arab and Greek history of the island is wonderfully apparent in the architecture and style of Palermo; a faded glory that’s crumbling and neglected yet somehow all the more beautiful for it. Yes, the presence of the Mafia rumbles like an undercurrent here, yet this adds to the filmic quality of the city - all narrow, winding streets and locals in doorways. Life is lived against a backdrop of baroque facades, with Arabic domes rising over the city and Byzantine mosaics on church walls and ceilings. Solunto, six miles out of the city, is an elevated archaeological site, with incredible Roman ruins and sweeping views of the sea. 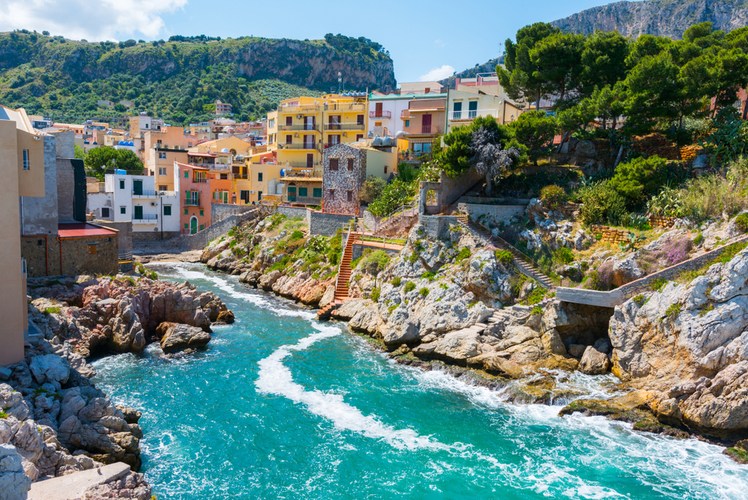 Perched high above the Bay of Naples, Sorrento occupies a prime position on one of the most beautiful stretches of coastline in the world. Wander the medieval streets of the town, sit and observe the locals taking the evening stroll in the Piazza Tasso while you sip on a limoncello - the lemons here are said to be the best in the world and in Springtime, the fruit trees are heaving with them, which both colors and perfumes the surroundings delightfully. The old city center is car-free, which makes the experience even more pleasant and authentic - and if you have time for a day trip, then both the glittering island of Capri and the ruins of Pompeii are within easy reach. 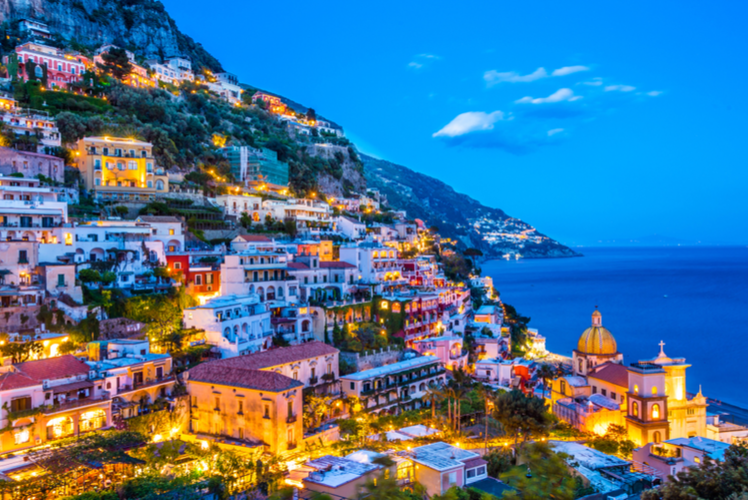 With lakes, national parks and the Adriatic coastline all featuring in its landscape, Abruzzo is definitely one of Italy’s most scenic regions. It also features of the the country’s oldest cities, Chieti, which dates back to around 1181 BC, and houses fascinating architecture in a mix of ancient and modern - all set against the splendid backdrop of the Abruzzo Mountains. Explore preserved medieval towns, such as Rocca Calascio, which boasts a 10th century watchtower at nearly 1,500 meters above sea level, and fuel your explorations deliciously, with world-renowned wine and exceptional cuisine. Meanwhile, glorious sandy beaches and elevated hiking trails give nature lovers plenty of ‘time outside’ options. 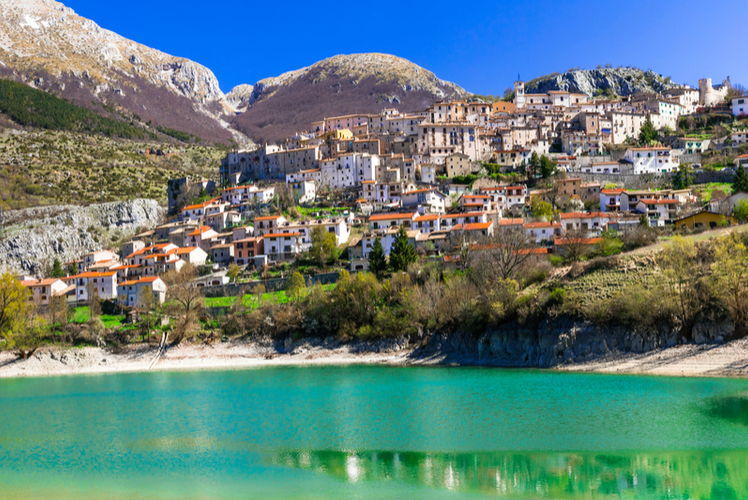 Long-synonymous with the mysterious shroud, which may or may not show the imprint of Jesus, Turin (Torino in Italian) was the first capital city of Italy; more recently, its status was assured by the 2006 Winter Olympics. Home to the Italian royal family in the mid 19th century, many traces of these days of grandeur can still be seen throughout the city, in architectural features such as archways over the sidewalks, which protected the monarch from poor weather. Take your pick from any number of spacious piazzas, in which the locals convene, to soak up the beauty and atmosphere of the city, or spend your days examining its offerings in a more structured way, via its many galleries, museums and theaters. 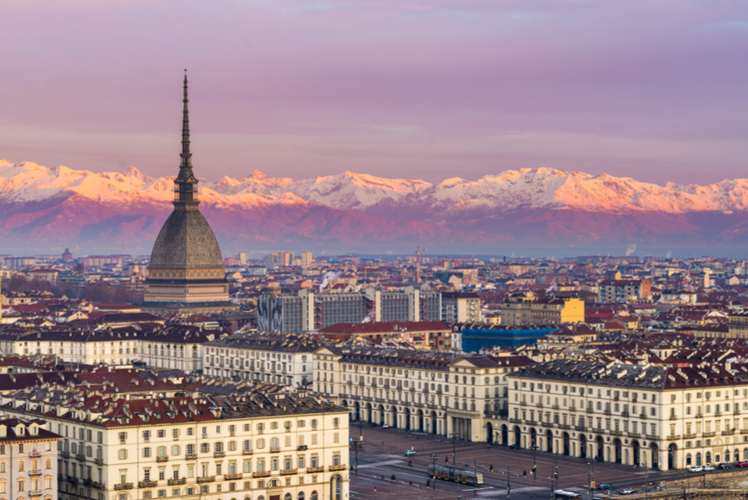 We dare you to come to Verona and not stand on at least some form of a balcony, looking wistfully out on the evening. Nope, knew it - you won’t be able to resist. After all, this jewel of a city formed the backdrop to the ultimate tragic love story, Shakespeare’s Romeo and Juliet, as well as several of his other plays. A UNESCO World Heritage site, it features some incredible architecture, including a Roman amphitheater and theater, while the Piazza delle Erbe, located right in the city’s historic heart, is full of buzzy (though pricey) places to eat, plus an ancient fountain and frescoed walls. Juliet’s actual balcony is located not far from here; visit the Casa di Giulietta museum if you want to be able to actually stand on it. 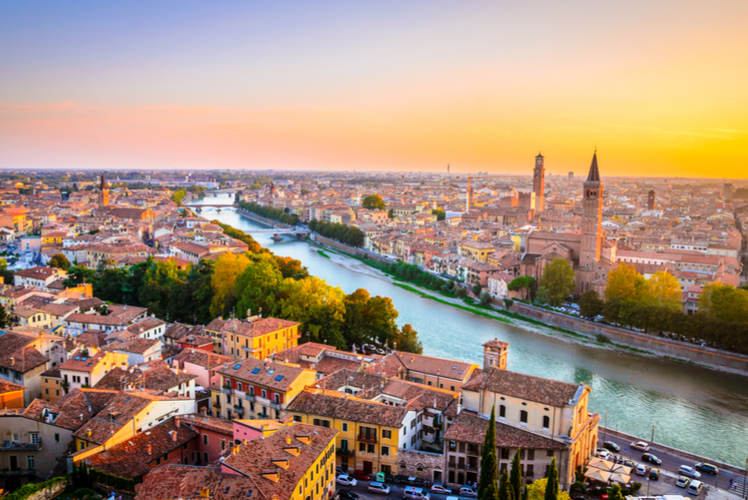 Pilgrims have been making their way to this gorgeous hillside town, the place in which St Francis was born and buried, for hundreds of years, but even if you are not religious, its postcard-perfect setting makes it a must see in your Italian travels. Surrounded by the gentle undulations of the Umbrian countryside, the jewel in the crown of this UNESCO World Heritage Site is the Basilica di San Francesco, which features an incredible array of frescoes and artworks. At the town’s pinnacle sits the enormous Rocca Maggiore, a 14th century castle from which there are incredible views of the surrounding valleys. 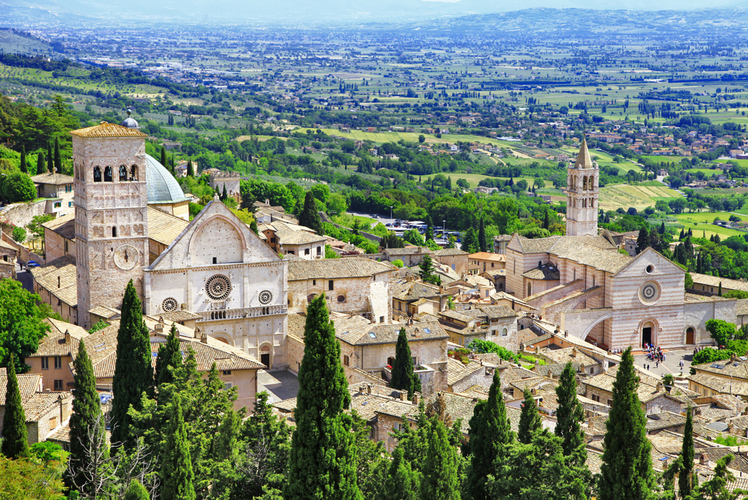 Something of an unsung hero among overseas travelers, Italians have been wise to the charms of Bologna for ages - and since it’s where one of our favorite pasta toppings comes from (bolognese, of course!) then we think it’s about time you got on board with everything else this city has to offer. As well as its wonderfully well-preserved historic center - think arched colonnades and Renaissance structures - the city’s architecture also features a beautiful medley of warm colors: reds, ochres , umbers, apricots and terracottas, all of which are a feast for the eyes and for your Instagram feed. With the world’s oldest university to be found here, expect a lively student population and the variety of shops, restaurants and bars that’s frequently the result of this. 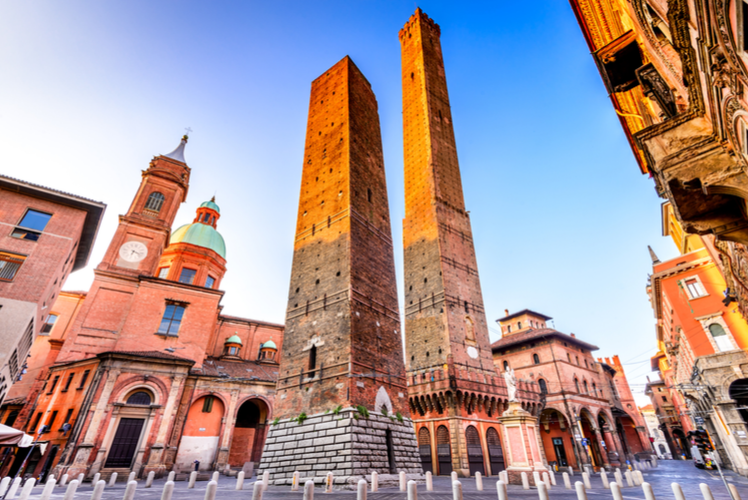 As the largest lake in Italy, Lake Garda is unsurprisingly a popular destination - but size isn’t everything and in terms of beauty, this region offers it in truckloads. Head to Monte Baldo, on the northeastern side, for a cable car transporting you to panoramic views. There are several quaint towns clinging to the lake’s shores to be explored; Sirmione, with its thermal springs, cobbled streets, a 13th century castle and Roman ruins perched above the waterline, makes a particularly worthwhile stop, but each little town is rich with things to discover. At the Lake’s northern end, the jagged peaks of the Altograda Mountains form an impressive backdrop and are popular with adrenaline sports enthusiasts. 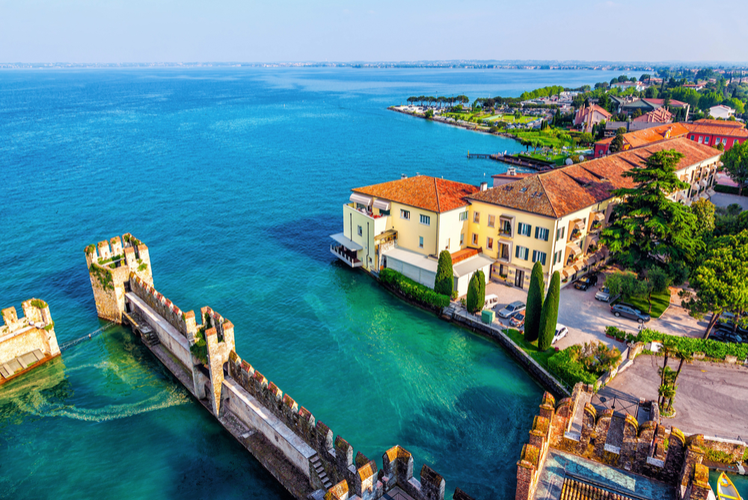 Comment on 15 Beautiful Places and Cities To Visit In Italy