Check in and Check out the 10 busiest airports in America

The airports of America are among the busiest in the world and as such are placed under extreme pressure. With millions of passengers coming and going, 365 days a year on both internal and international flights – the air over America is seldom quiet. Here we take a look at some of the busiest airports in America.

LAX is one of the biggest international airports in the whole of America and busiest and largest in the state of California. Last year, almost 81 million people flew in or out of the airport which makes it the fourth busiest airport on the planet. It is one of only a few airports in the U.S to have four parallel runways and is known as the ‘Gateway to the Pacific Rim’.

Hartsfield-Jackson International Airport in Atlanta, Georgia has surprisingly been the world’s busiest airport for passenger traffic since 1998. It sees 100 million passengers through its doors every year and one of the reasons it’s so busy is that Atlanta serves as the major hub for travel around the South-Eastern states for domestic flights. It has 207 gates and is the main base for Delta Airlines.

O’Hare Airport serves around 77 million passengers per year and has previously been the busiest in the world for take offs and landings. It holds the title of being the third busiest airport in the U.S and the sixth busiest in the world by passenger volume. It also boasts having more runways than any other international airport, by having eight!

Located in Queens, New York, JFK is the busiest international airport for being the gateway into North America. Almost 59 million passengers were served last year, making it America’s fifth busiest airport. JFK can boast having flights to every inhabited continent on the globe, looking after passengers with its six terminals and four runways.

McCarran International is the biggest airport serving the state of Nevada. It saw passenger numbers of almost 48 million last year and is the 26th busiest airport in the world. Commercial flights began in 1948 and the airport has expanded considerably since that time. It has often been a forward-thinking airport and was the first in the U.S to offer free Wi-Fi in passenger terminals back in 2005. 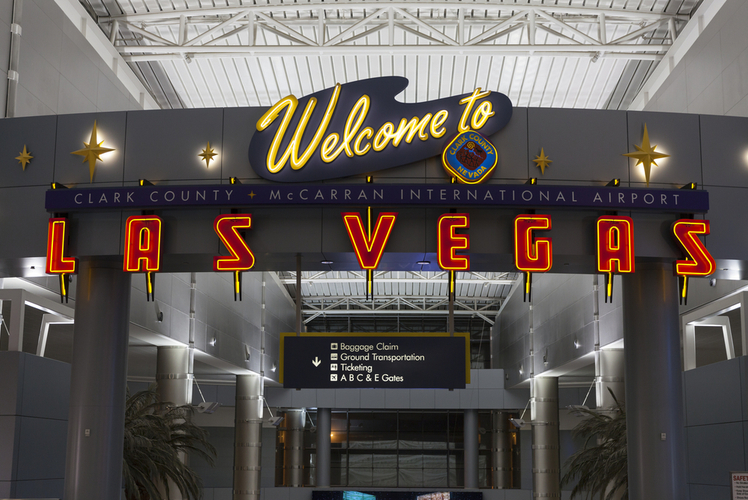 Arizona’s biggest and busiest airport, Sky Harbor is based in the city of Phoenix and deals with in excess of 43 million passengers each year. This makes it the 11th busiest in the U.S and each day it handles 800 tons of cargo too. American Airlines alone has nearly 300 departures per day from Sky Harbor, flying to 90 different destinations, making it the airport’s biggest carrier. The most flown international destinations include Canada, Mexico and England.

Orlando is the 14th busiest airport in the U.S and handles more than 40 million passengers per year. There are four runways with Southwest Airlines being the largest carrier. Many foreign carriers use the airport as a main gateway into Florida for tourists. The site used to be a military base called McCoy Air Force Base which was closed after the Vietnam War.

Its official name is a bit of a mouthful – General Edward Lawrence Logan International Airport – so you can see why it’s shortened to just ‘Logan’. It is the biggest airport in the New England area at 2,384 acres, with six runways and 16,000 employees. Last year saw 37 million passengers pass through its doors and it’s the 17th busiest airport in the United States.