There is something about the tranquility of a crystal-clear body of water that helps even the most stressed out person relax. Considering 71 per cent of our planet is covered in water, finding the perfect spot for you to unwind may seem easy. But finding the most perfect spot – the one with the clearest waters in the world, may be a little tricky. That's why we've done our research for you and found 15 destinations to visit that offer stunning crystal-clear waters to experience.

This town, located in the interior of Brazil, has been called the Caribbean of the central west because of the clarity of its water. The ground has large amounts of limestone that actually forms a natural filtration element, leading all impurities to be deposited in the river bed. It is also filled with a variety of marine life, which makes Bonito one of the best freshwater diving and snorkeling areas of all time. 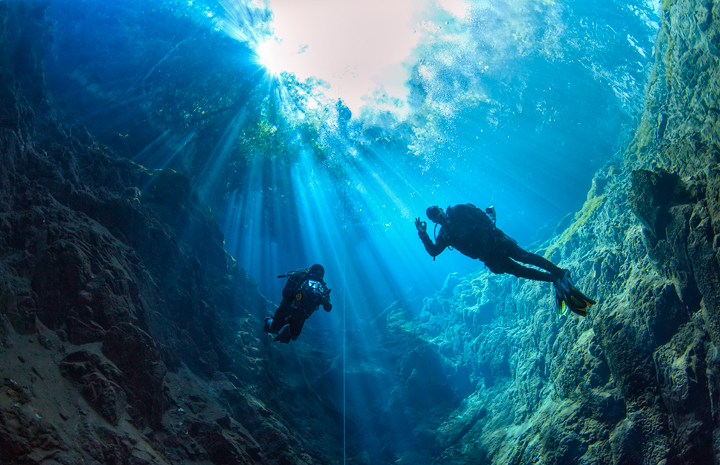 This Arctic river is said to be one of the best places to visit for kayaking and exploring nature because the nature is unspoiled and not interrupted with infrastructures. Each year, the river has a different shape so you aren't likely to get the same experience twice. If you are looking for the clearest waters, adventure and tranquility, this is the place to go. 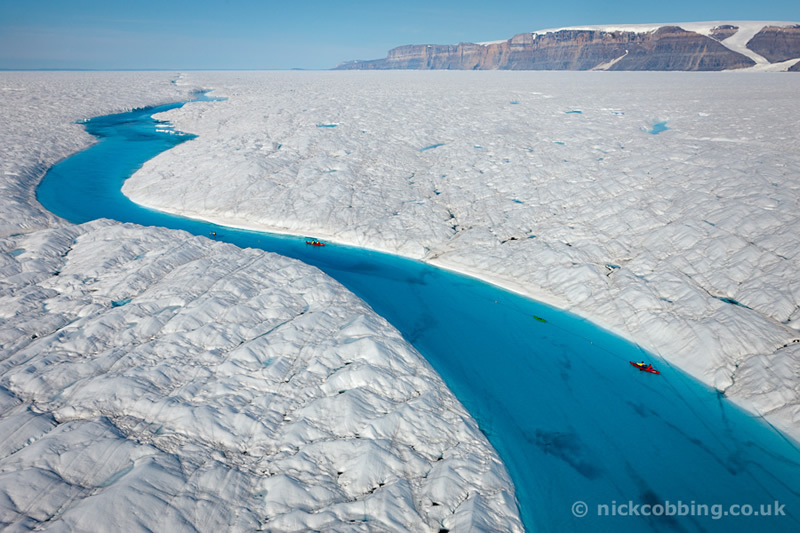 This place is home to several luxury resorts that sit high above the water on stilts, making it easy to take in the beauty of the island's clear, turquoise water. You can also walk down to the beach and get up close to the water while lying on the white sand that surrounds it. It's easy to see why this island attracts tourists from all over the world every year. 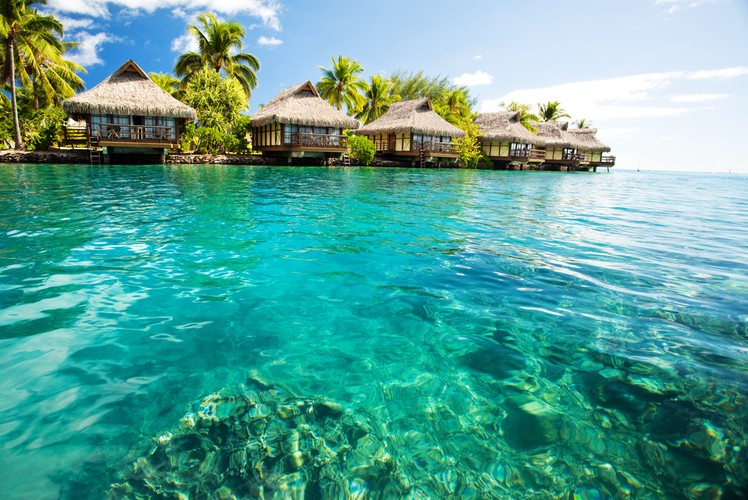 This unique lake is part of Jiuzhaigou Valley, one of China's nature reserves and national parks. The shallow lake is so clear it lets visitors see all of the ancient tree trunks that have fallen into it over the years. It's most beautiful to visit when the trees around the lake change color, allowing the lake to reflect all of the colors. 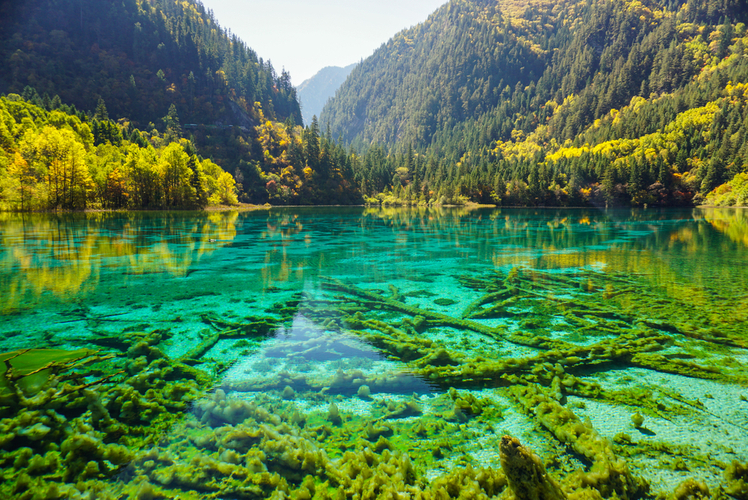 The Phi Phi island consists of two large islands – Ko Phi Phi Don and Ko Phi Phi Leh – along with several other smaller ones. What makes these bodies of water so special is their clarity, as well as the limestone karsts that pop out from the sea. It's so famous that the movie The Beach, was actually filmed here. 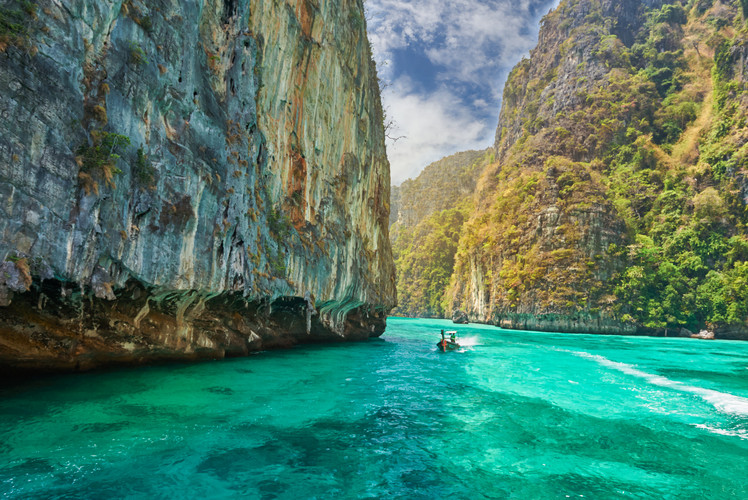 It's believed that this is the most beautiful beach on the entire island of Menorca, mainly because of it's turquoise water and sandy beaches that are surround by greed trees and rugged rocks, which offer warmth during the colder months. If you visit this area you can ensure you won't be overcrowded by visitors since the cove has a limited amount of visitors each day. 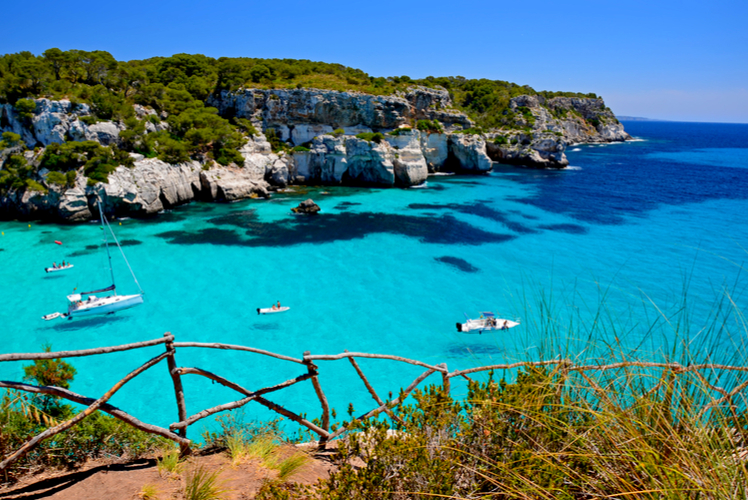 This lake, located in Alberta's Banff National Park, is beautiful because of the glaciers that surround it. As well, because of the glacial sediment deposited in the lake, the water takes on a gorgeous blue-green color. It's so picturesque that it has been used in background images for Windows 7, Bing, Blackberry, Palm and Android products. 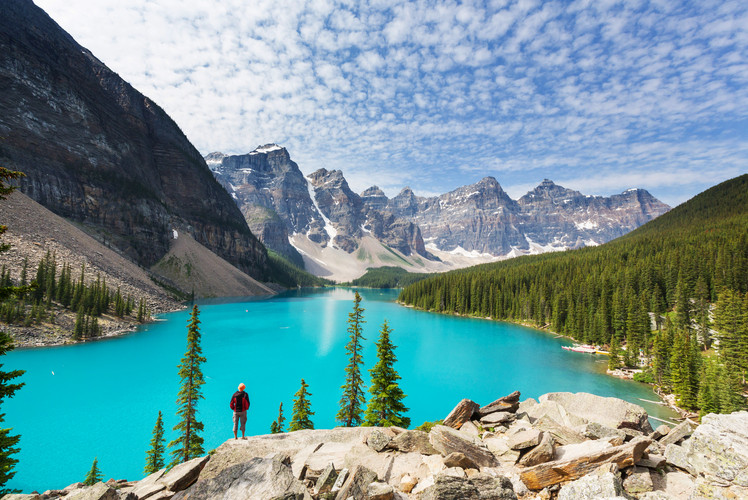 Located off the coast of Zakynthos, one of the Ionian Islands, this beach is also known as Shipwreck Beach. It brings in thousands of tourists each year to stare at its limestone cliffs and clear blue water. It's also quite famous as a great jumping spot. 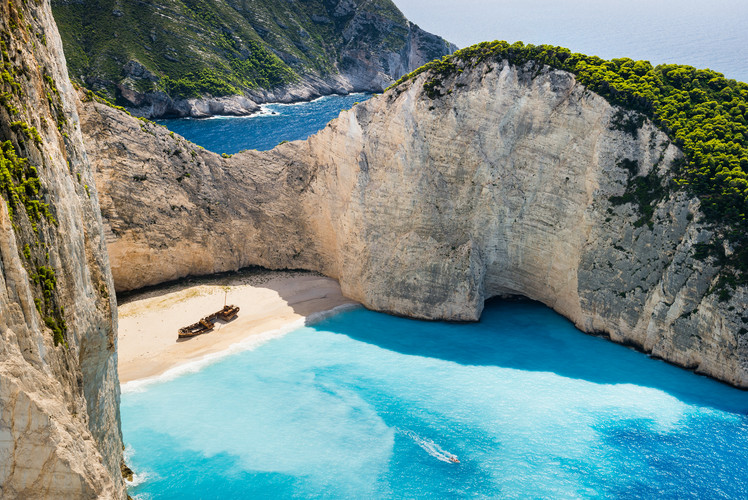 This is one of the most famous honeymoon destinations in the world due to its clear, blue waters and gorgeous mountain scenery. This spot is so picturesque that it has actually been referred to as the most beautiful island in the entire world. 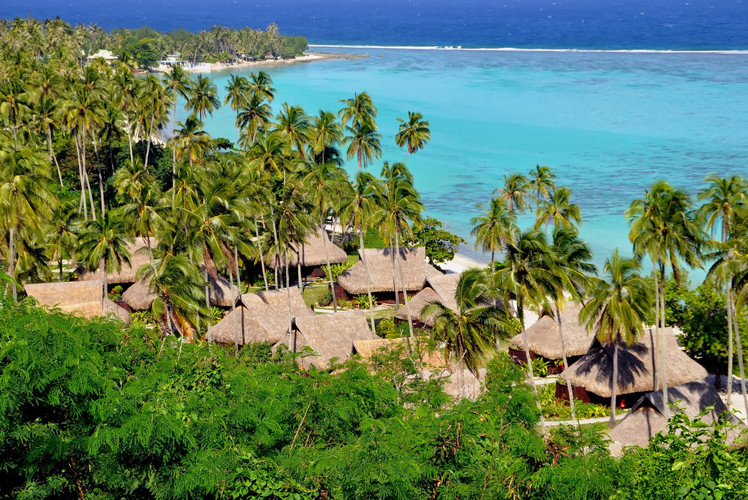 This should come as no shock to those looking for one of the most beautiful bodies of water to visit. Known for having the worlds largest coral-reef system and as the most popular diving location on the planet, the Great Barrier Reef is also known for its beautiful, clear and calming water. 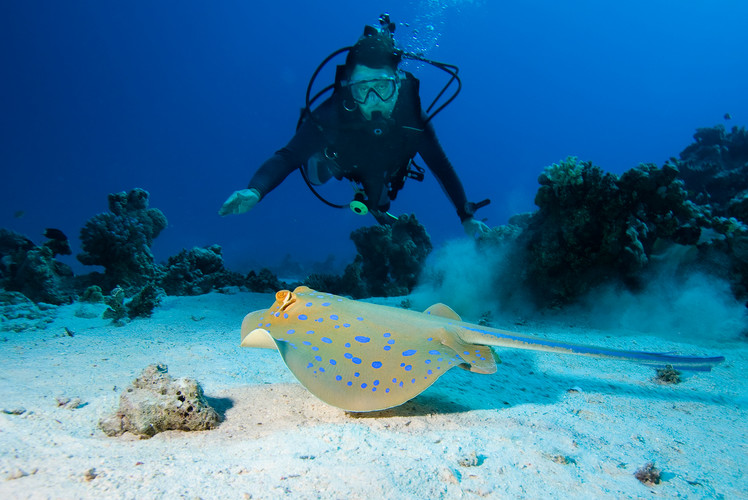 This area is so tranquil it's actually protected by the Honduran government and remains off limits to commercial fisherman. They say if you visit here you will know what the word “pristine” actually means. The area is also a great place to visit to take part in some of the best scuba diving in the world. 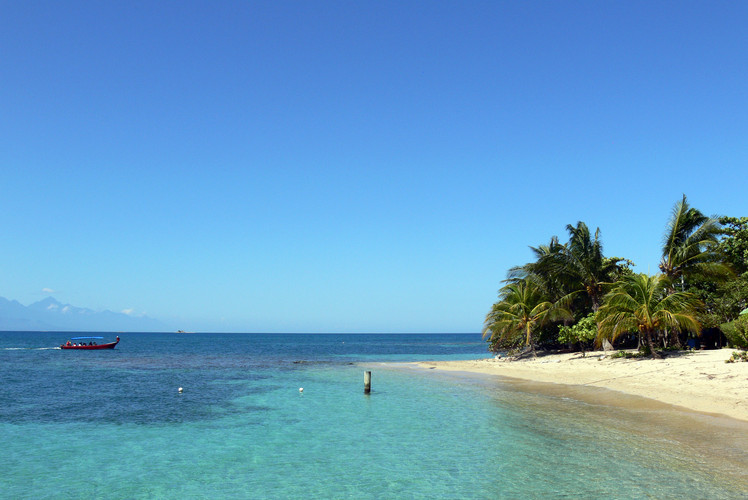 This lake is believed to be the clearest lake in the entire world and is said to be almost as clear as distilled water. Although you won't be allowed to swim in the lake – it is considered sacred - you can still take in its beauty while hiking, fishing or camping. 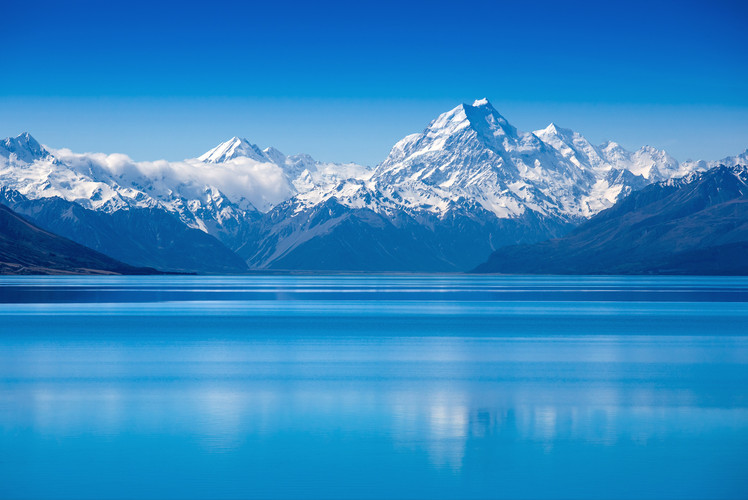 When you think of visiting beaches in Europe, you likely don't think of Croatia. But there are so many beautiful towns surrounding the Adriatic coast of the country that this area should be on your list. Primosten boasts one of the most clearest waters in the world and what makes the beautiful blue waters even better is that the area is surrounded by vineyards that are so beautiful UNESCO is considering them as a World Heritage Site. 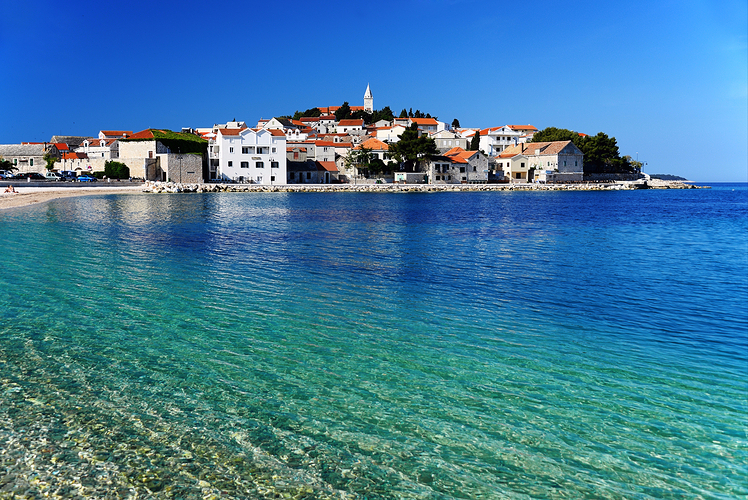 It's believed that the white sand beach and gorgeous blue water here makes this place “an image of natural perfection.” Its coral reef and diverse marine life offer an extra thrill for visitors. In fact, the marine life found here is said to be comparable to the Great Barrier Reef. And what makes the beauty of this area even better is the fact that there are no stores or hotels on the island, ensuring you get the most peaceful vacation of all time. 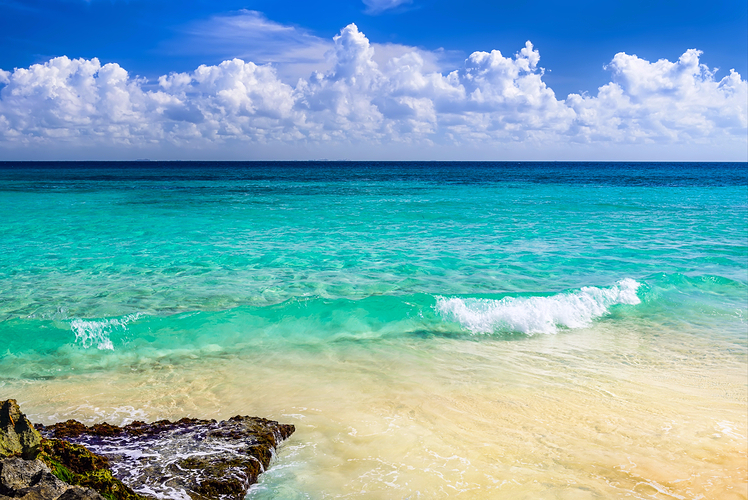 The clearest waters in this area have been drawing in tourists for years, mainly because of its clarity. So clear is the water here, that it's said boats actually seem to be hovering above the water, rather than floating on it. This city is also ripe with history and is the location of one of the seven wonders of the ancient world – the Mausoleum at Halicarnassus. 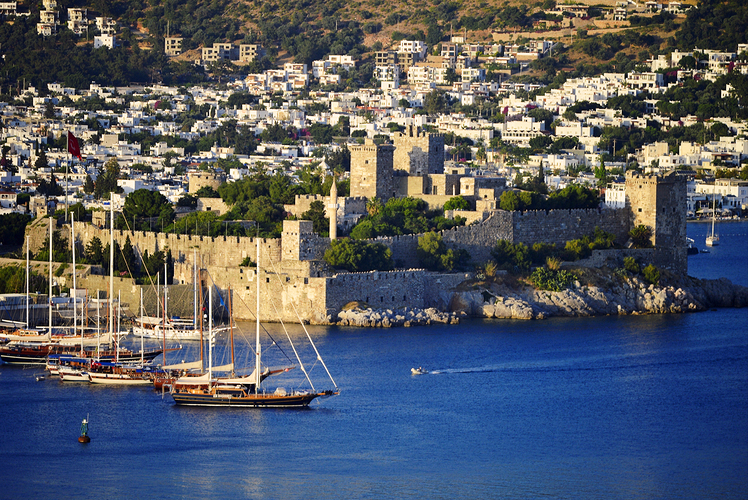