The Mediterranean region encompasses many beautiful destinations, making it a popular European vacation choice in the summer. With its various cultures, staggering landscapes, glittering golden beaches and delicious cuisine, there’s something for everyone in this wonderful area of the world. If you’re seeking inspiration for your next vacation, take a look at these fantastic destinations in the Mediterranean.

The beautiful and popular island of Majorca is famous for its gorgeous coastline which features stunning white sand beaches, striking deep blue water and intimate coves below dramatic cliffs. It also has a reputation for having a very vibrant nightlife, and during the summer you will find many fairs and festivals taking place. Majorca has an interesting food scene and offers a variety of local dishes at both its inland restaurants and bistros on the coast. Famous main dishes include fideua, a local paella made with noodles instead of rice, and suckling pig spit-roast. 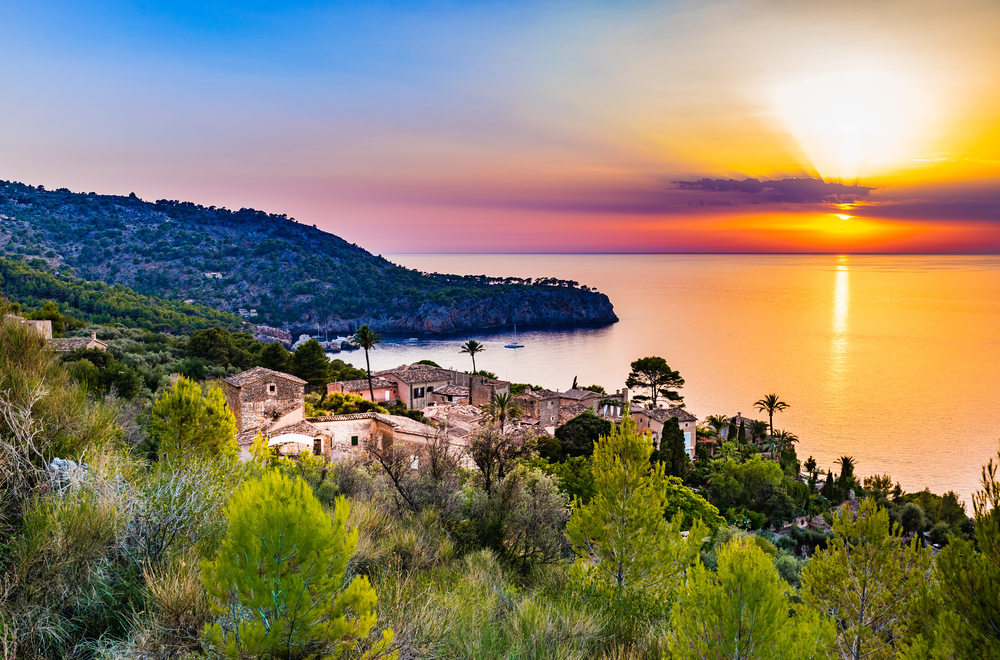 Crete has an astonishing landscape which encompasses stunning beaches, vibrant cities, pretty villages and breathtaking mountain ranges. Among the island’s natural beauty is the Ideon Cave, which was the birthplace of Zeus, and the breathtaking Samaria Gorge. A rich history resides in Crete, and there are many magnificent churches, chapels and monasteries to explore. Situated in the capital city, the renowned Heraklion Archaeological Museum houses the most notable and complete collection of artifacts of the Minoan civilization of Crete. In addition to stunning scenery and a wealth of history, there is also incredible food for you to try. Many rural tavernas produce their own meat, cheese, olive oil and wine, which they use in the dishes they serve to their customers. 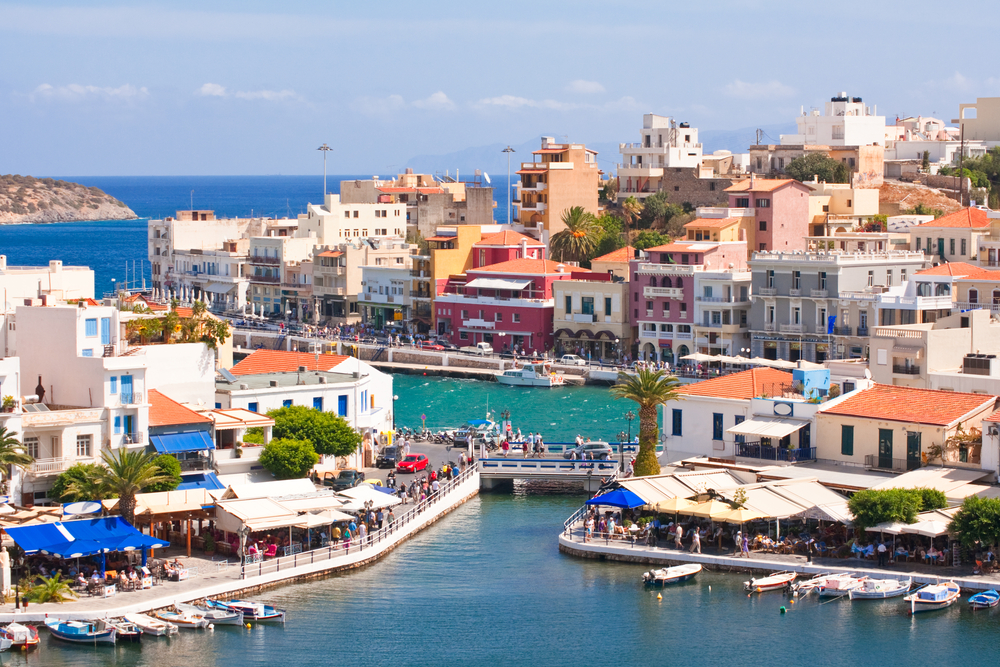 The enchanting city of Dubrovnik is known for its beautiful Old Town which is a UNESCO World Heritage site. Stunning marbled streets provide plenty of wonderful sights just waiting to be explored. There is also the historic city walls which you can walk on, that previously protected a civilised republic for centuries. After marvelling at the amazing architecture, take a cable car up to Mt Srd for spectacular views of Dubrovnik and the surrounding area. There are also some great beaches to relax on after a tiring day, and many cruises and sailing adventures take place in the azure sea. 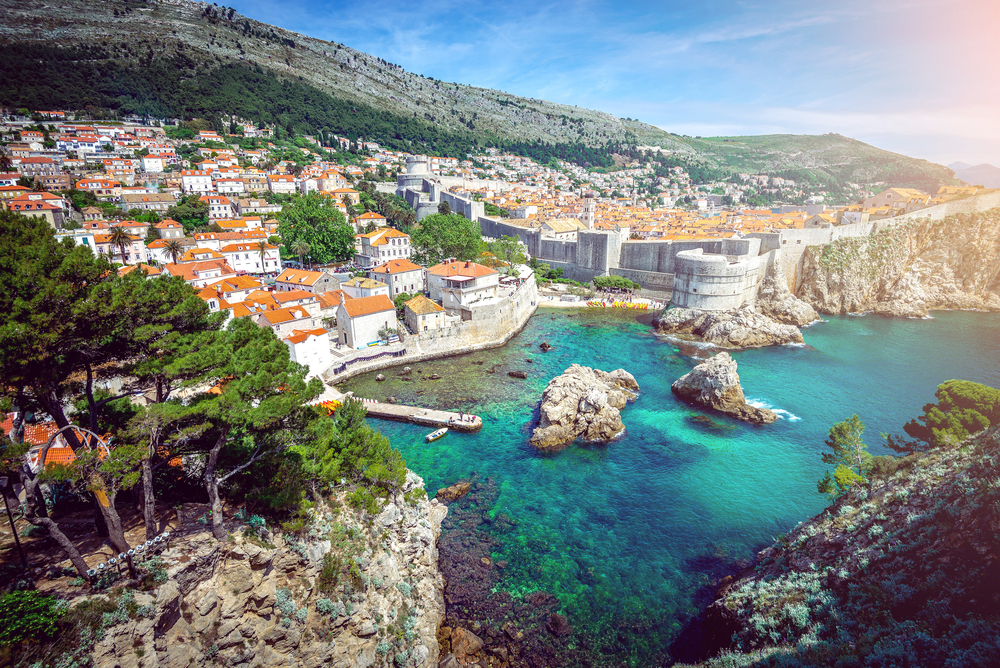 Corsica is a very diverse mountainous island which offers a mix of coastal cities, glittering sandy beaches, dense forests and craggy peaks. For a varied vacation, there are plenty of things to see and do in Corsica. Outdoor pursuits such as hiking and camping are within easy reach, as nearly half of the island is dedicated to nature reserves. Amongst the trails in Corsica is the notable GR20, which is considered one of the best trails in the world. Back at the coast, you can work on your tan or relax on a leisurely cruise across the sea. The cuisine is also very enjoyable, and incorporates a lot of fresh ingredients. 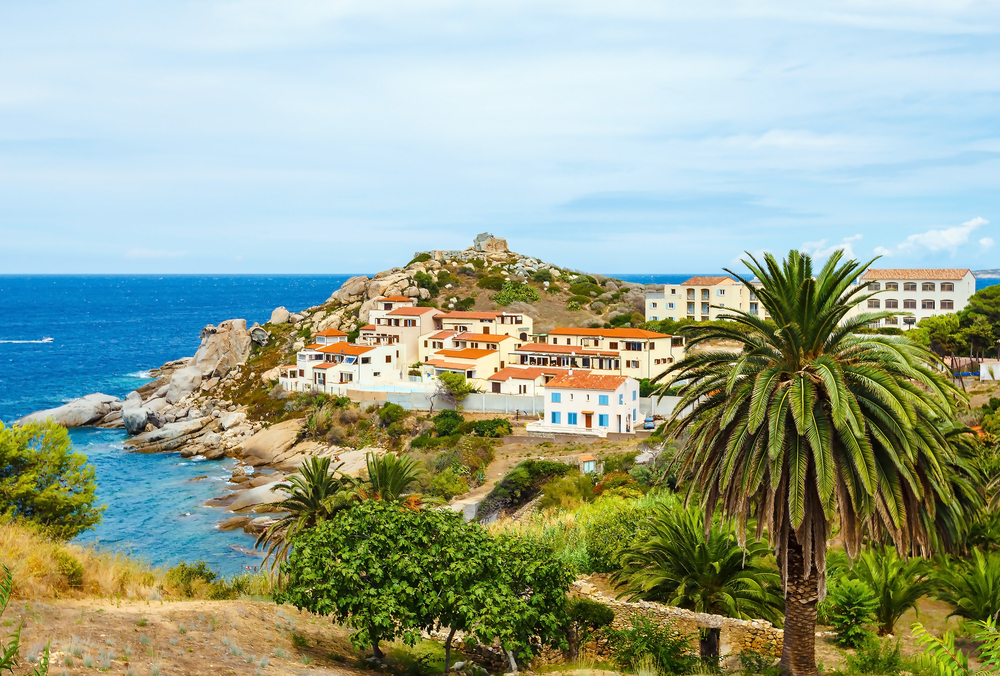 The island of Santorini is another charming place to visit in Greece which is popular with couples. The stunning bright white houses, blue-domed churches and multi colored cliffs are just some of the visually astounding characteristics which define this idyllic island. A massive volcanic eruption back in 1450 BC caused a steep-edged crater in the middle of Santorini which is a breathtaking sight from the top of the cliffs. Due to the island’s volcanic past, the beaches here are less white and more of a striking dark gray. Kamari and Perissa have some of the best beaches, and you will find many watersports taking place along the sands of Perissa. The weather is wonderfully warm in the summer, and at the end of the day you can witness a legendary sunset in Oia which is a truly magical experience. 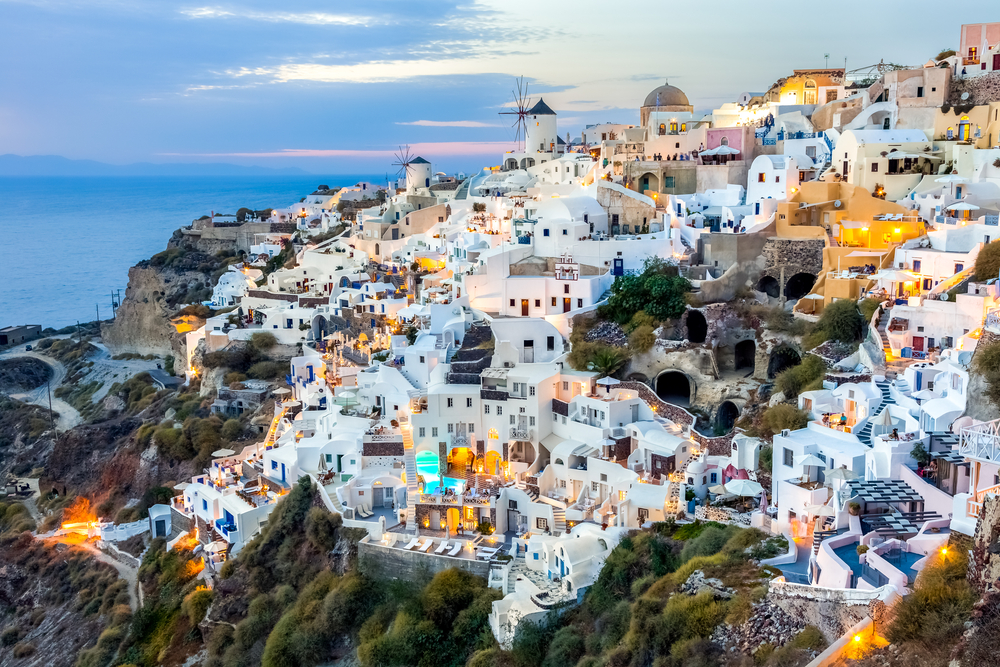 Five beautiful villages make up the stunning Cinque Terre located in the Liguria region of Italy. Lush green cliffs decorate the landscape and there are a series of hiking trails you can take which showcase the natural beauty of this area. Two large sandy beaches are found at the village of Monterosso, and there are pretty pebble beaches near Riomaggiore and Corniglia. Swimming in the sea is an option at all of the villages and you will find a great swimming hole in the gorgeously romantic Manarola village. 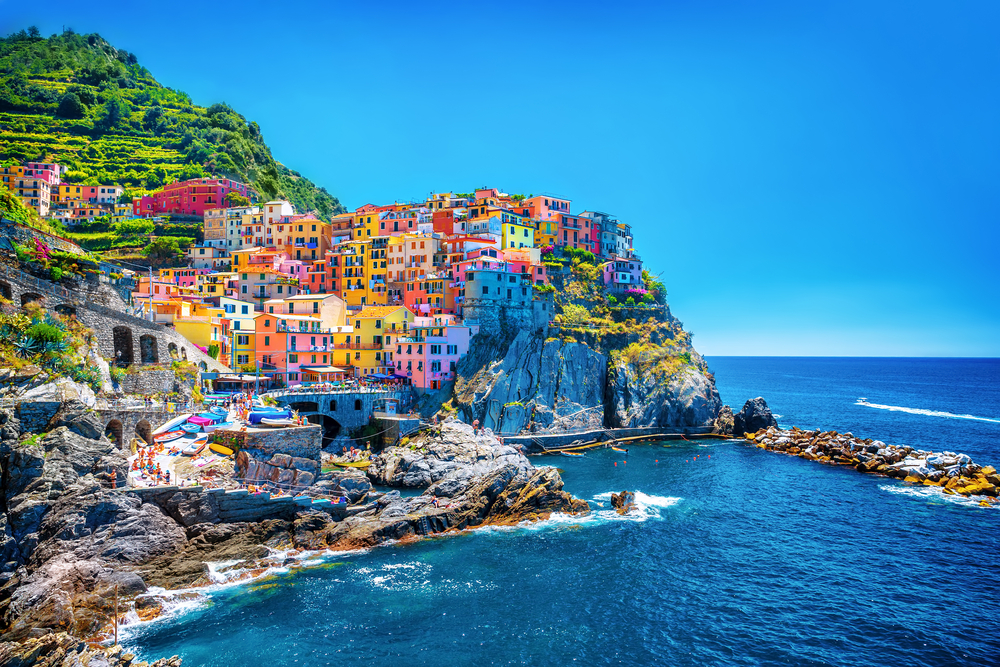 The easternmost Balearic island of Menorca is more low-key compared to its noisy neighbours Majorca and Ibiza which are located nearby. Despite the small size, this beautiful island is home to 120 stunning beaches which offer many secluded spots to enjoy the peace and tranquility of this tropical paradise. The crystal clear waters surrounding the island are perfect to take a dip in and there are many popular activities you can do in the sea including swimming, canoeing, boating, diving, snorkeling and kayaking. Away from the water there is an unspoiled scenery of prehistoric monuments and attractions such as the Town Hall, the Church of Santa Maria and the Church of San Francisco. There are also many hiking and cycling routes that you can take to explore the rural locations of Menorca’s magnificent countryside. 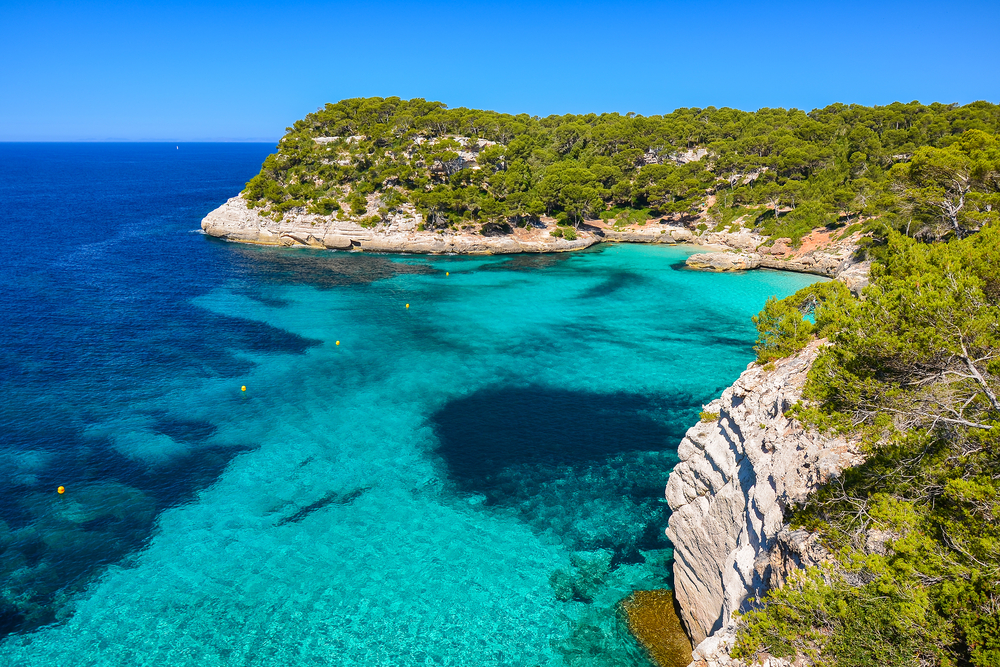 Sicily is the largest island in the Mediterranean Sea and features a varied landscape of stunning coastlines, erupting volcanoes and awe-inspiring mountain scenery. This fantastic area is great for outdoor activities including hiking, diving and swimming. One of the biggest attractions of Sicily is its amazing collection of cultural sights. Outside the town of Piazza Armerina is a Roman villa containing the largest and richest collection of Roman mosaics in the world. While 12th century golden mosaics are found in the great cathedrals of Monreale and Cefalu. In Agrigento, the Valley of Temples is one of the main cultural attractions in Sicily and also a national monument in Italy. More recent architectural gems include the domes and palaces of Noto and the Byzantine mosaics and Norman palace walls in Palermo. 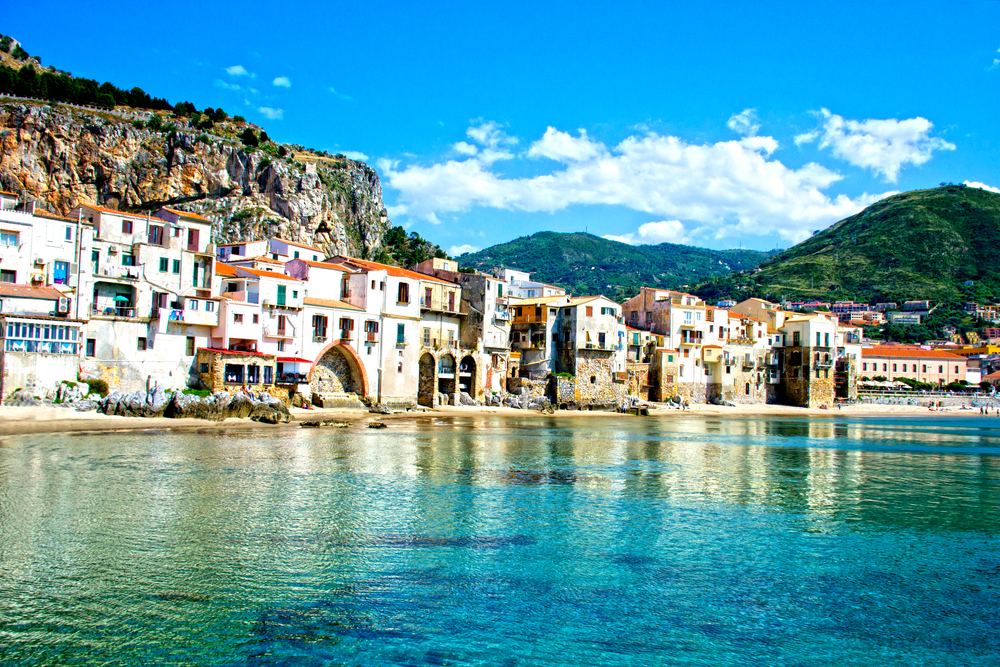 Comment on Exploring the Med: Sun-kissed shores and vivid culture