A bird watcher’s dream, a landscape lover’s oasis, and a history buff’s fantasy, the archipelago off the northeastern tip of Scotland known as Orkney is one of the most pristine places to visit. Rich history and cultural attractions have lured in visitors for years, but it’s Orkney’s scenery that inspires them to return. Here are 10 ways to experience the islands’ abundant nature and wildlife.

Take a Peek at the Puffins

Puffins, arguably the world’s most popular seabird, are a magnificent black-and-white feathered sight. Although they are known for their quick whirring movement style, puffins are hard to miss in summer months. A stunning place to see puffins is the Castle of Burrian. This rock stake resides on Westray Island, which is accessible by inter-island plane or by ferry. You can also see puffins perched up on cliffs such as the 262-foot-high Noup Cliffs of Westray, along one of many coasts, and on Sule Skerry, an isolated rock that sits west of Orkney’s largest island known as Mainland. 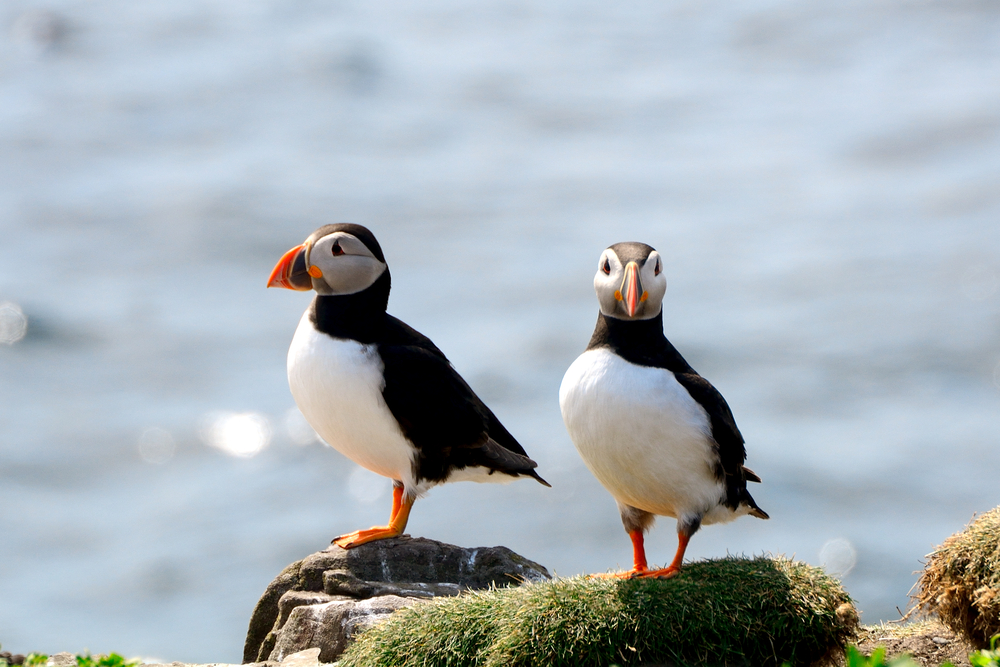 Head to the Brough of Birsay

The Brough of Birsay is located at the northwestern tip of Mainland, a great spot for viewing the northern coast line. It is only accessible at low tide, so be sure to ask someone at the village’s store for tide times. When the tide is low, you can climb to the top of the Brough for some of Orkney’s most captivating views. An easy walk along the cliffs will reveal seals resting on rocks, and Skiba Geo, a restored 19th-century fisherman’s hut constructed in the side of a cliff. Keep walking and you’ll come across a whale’s hip bone set on a post and seabirds nesting high. You can also make your walk circular and see some of Orkney’s gorgeous farmer’s fields. 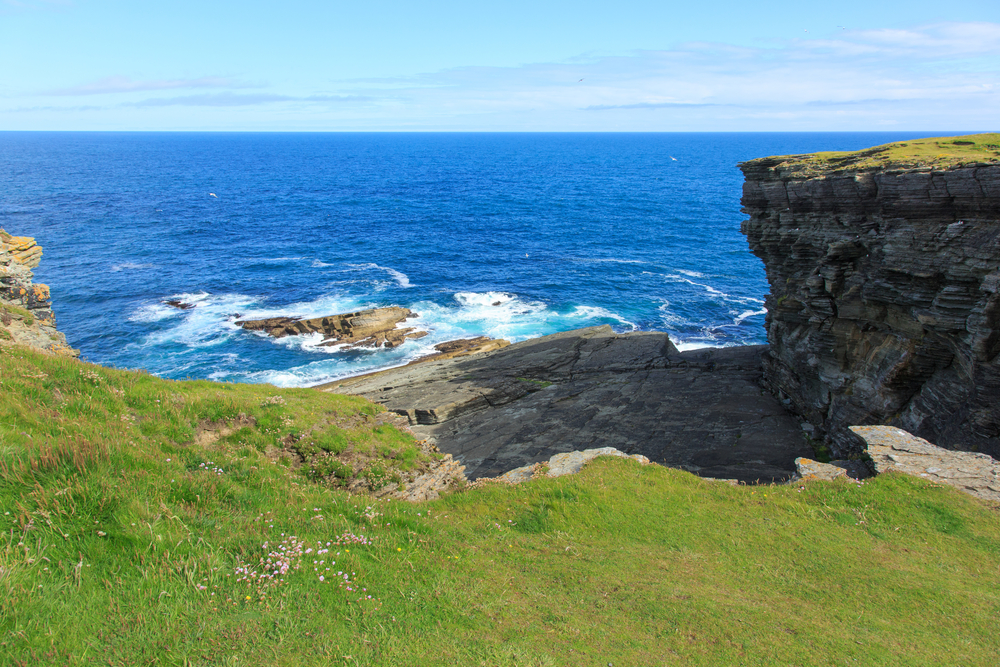 Orkney is a huge archipelago that holds 70 islands, 20 of which are inhabited, and each holds its own marvels. There are so many attractions that you can see, so getting to know the local tour guides can help you narrow down your list of things you just can’t miss and make your experience more relaxing. You can select themed tours that focus on the island’s wildlife and allow you to see hidden gems such as Scottish primrose, one of Britain’s rarest plants. Orkney’s ferry services make it simple to hop from island to island and meet your tour guides right when you get off your boat. 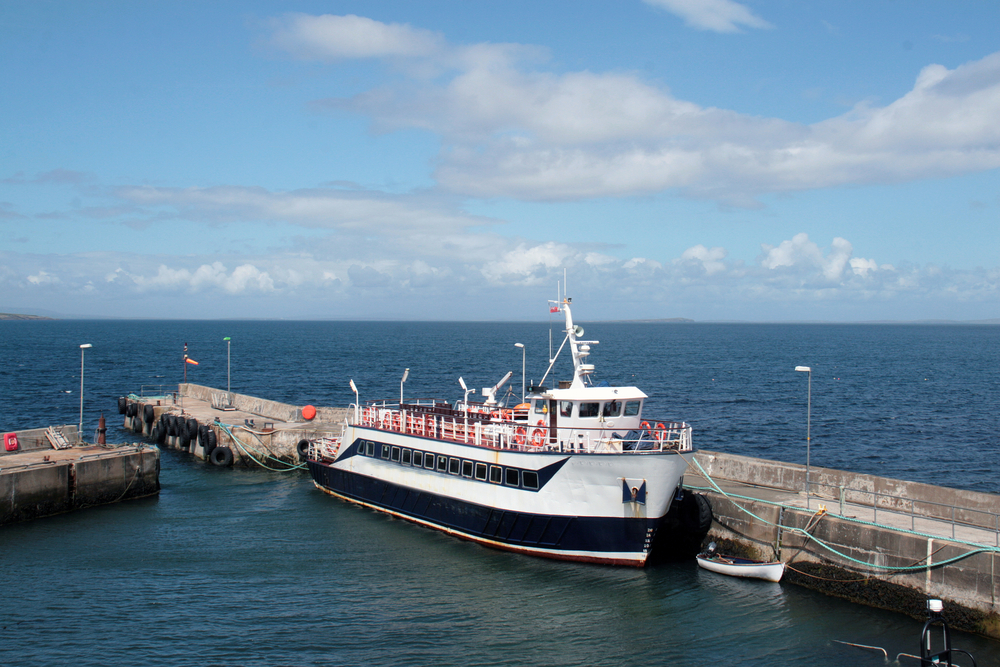 Bring your binoculars to Marwick Head

Marwick Head is one of the archipelago’s 13 nature reserves run by the UK’s Royal Society for the Protection of Birds, or RSPB. It’s home to the largest cliff-nesting seabird colony on the mainland. In the summer months, you’ll see guillemots, kittiwakes, razorbills, fulmars and the sought-after charismatic puffins. You might even be lucky enough to witness the red-throated Arctic skuas, or nature’s “pirates of the sky.” There’s no doubt that you’ll look up and see more than 20,000 birds nesting in the sandstone cliffs of Marwick Head on Mainland. 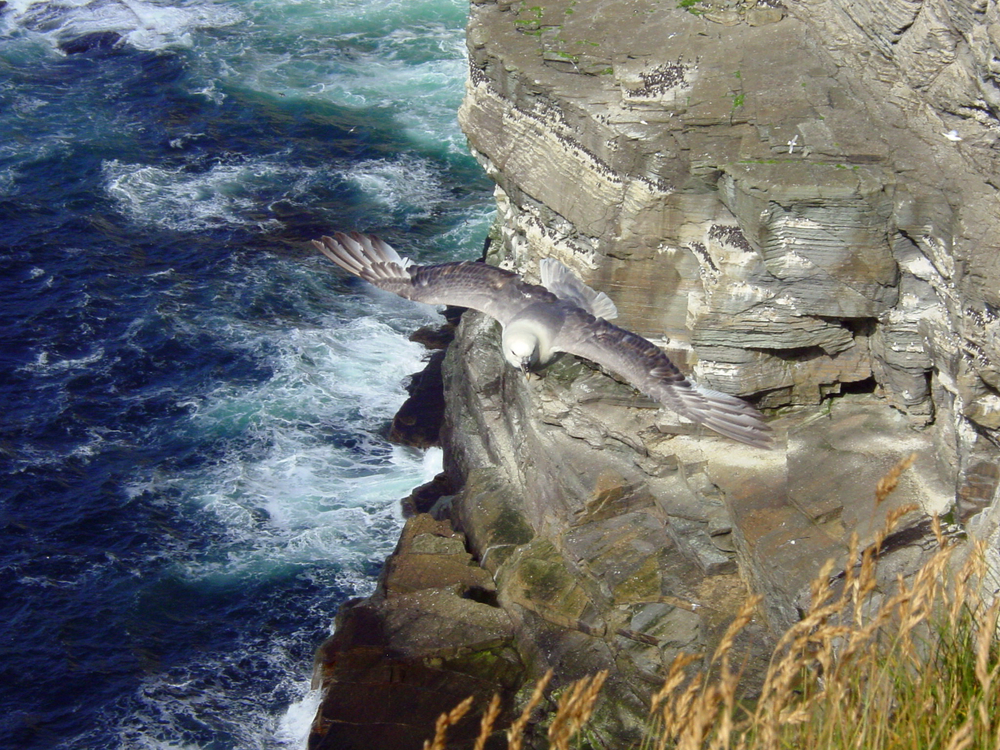 Journey out to the Yesnaby Cliffs

The Yesnaby cliffs are located on the Mainland’s west coast. They provide an easy walk along with views of eroded and winding cliffs, including a sea stack called the Yesnaby Castle. This highlight stands at an overwhelming 115 feet and balances on just two legs. You’ll also see the Brough of Bigging, which provides a promontory with marvelous views, along with high-nesting birds. Just south of Yesnaby, an area where maritime heath creates the perfect environment for Scottish primrose to flourish, you may be able to witness skuas stalking their prey and plotting to steal from their fellow nesters. 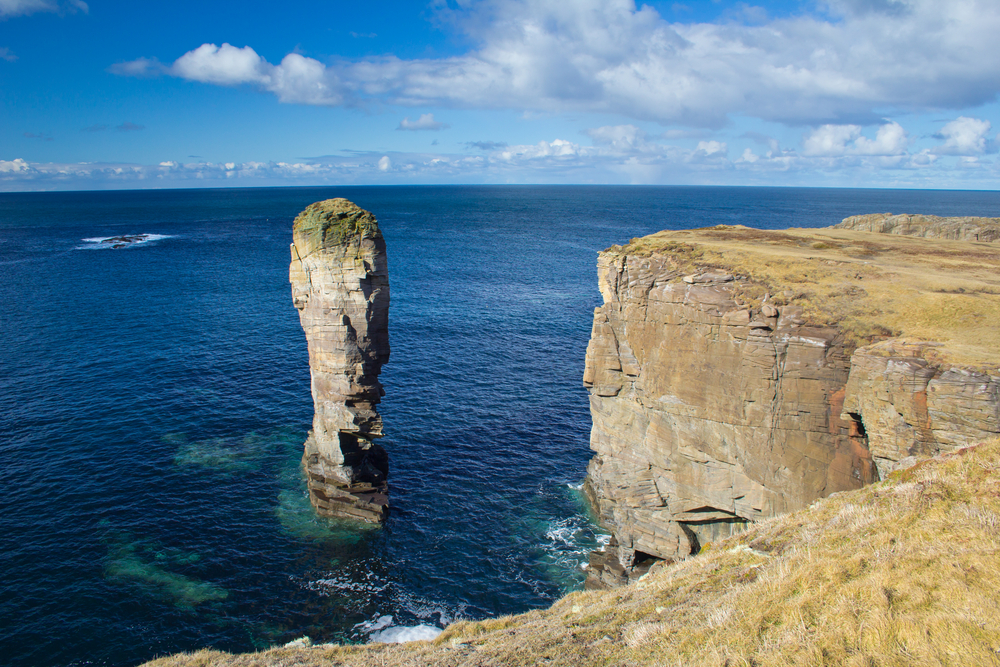 Venture beyond the Mainland to Rousay

Many people fail to venture off the Mainland due to its vibrant array of sites and activities, but less populated islands can offer many great experiences as well. Rousay is one of those islands. On the ferry ride over, you’ll see Humpback whales, Killer whales, Minke whales and more.

Rousay's single road circling the island makes for an easy drive once you arrive. It’s equipped with more than 150 archeological sites, giving it the nickname “Egypt of the North.” However, its unspoiled environment is arguably more impressive. The island hosts many delightful seals and a large variety of bird breeds, including some that are becoming quite rare. For example, the Short-toed Eagle showed up on the island recently, a bird that hasn’t been spotted in the UK since 1999. 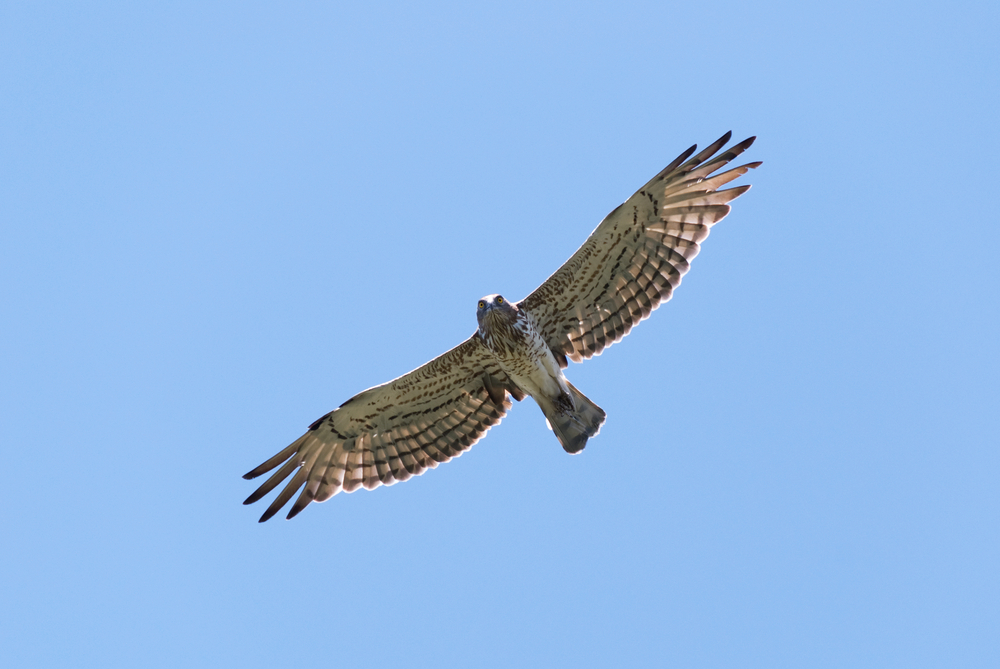 Witness the Old Man of Hoy

The Old Man of Hoy is a world icon, and it makes Hoy one of the most famous islands in Orkney. Old Man of Hoy is an impressive 450-foot sea stack that has become an obsession for rock climbing enthusiasts wishing to conquer obscure natural structures. It’s made of red sandstone as a result of erosion in the 1700s and sits 200 feet from the island. One of the best views of the sea stack can be found on the ferry you take to get to Hoy. 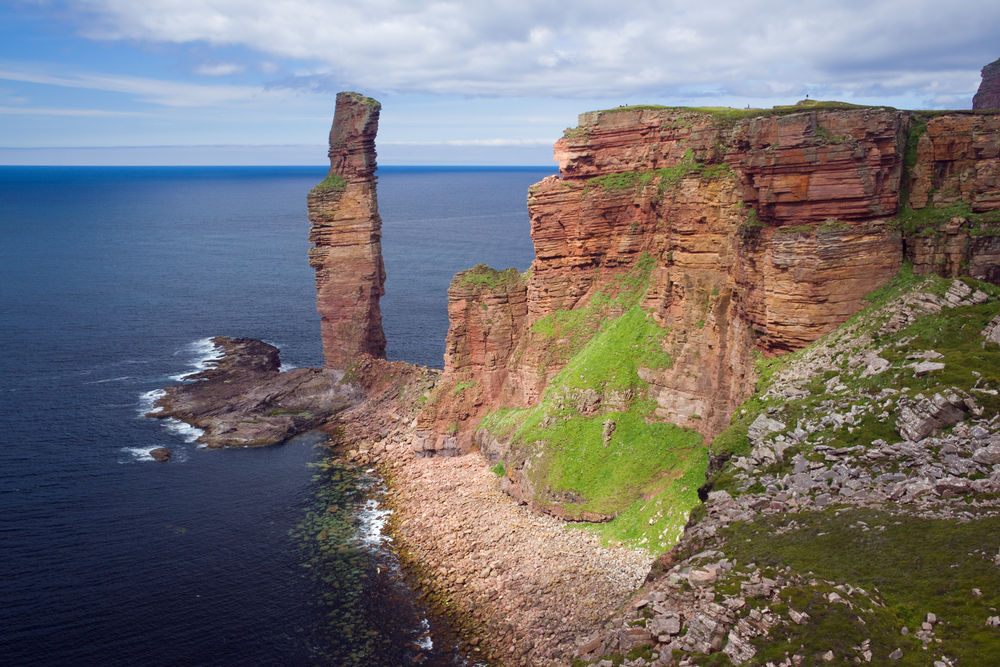 Visit the Tomb of the Eagles

The Tomb of the Eagles located in South Ronaldsay is a popular paid attraction in Orkney. It is a 5,000-year-old chambered tomb that hosts an incredible collection of bones and artifacts. The visitor’s center allows you to handle some of the artifacts and engage in conversations about the mysterious site’s unanswered questions. The mile-long walk from the visitor’s center to the tomb is superb; it showcases an abundance of maritime heath, grassland and wild flowers in the summer months. 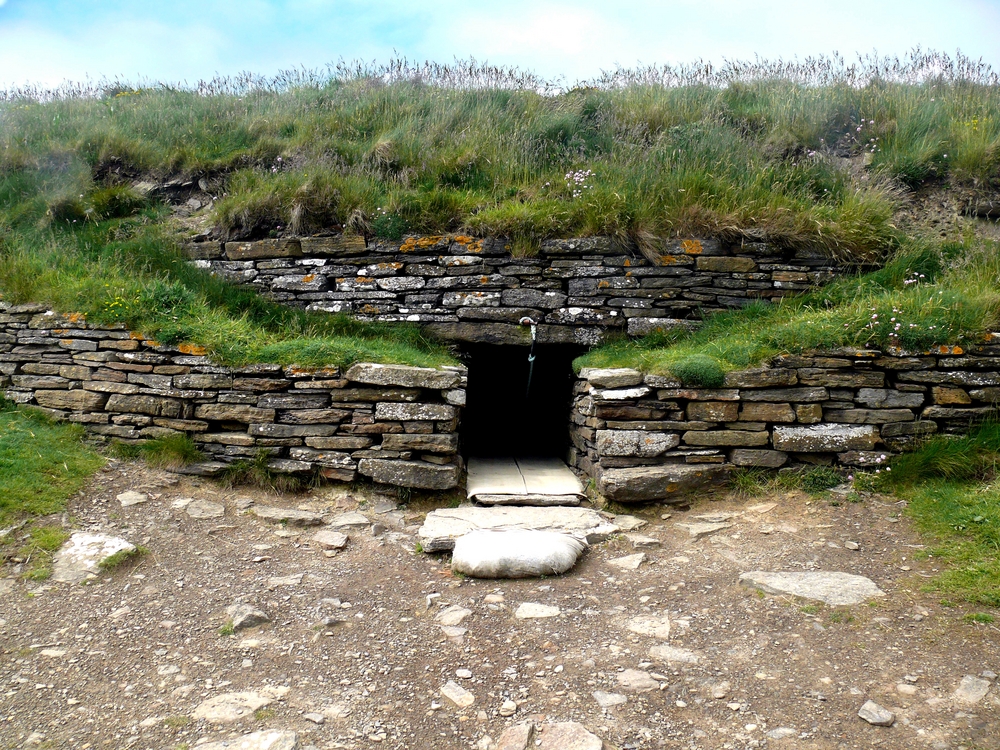 Travel to Westray Island, the Queen o’ the Isles

The healthily populated Westray Island, home to 600 residents, has an amazing RSPB reserve for nature lovers called Noup Head, also known as Seabird City. It rests among high sea cliffs and is one of the archipelago’s most significant sites for sea birds. You can see puffins, seals and cetaceans on the rocks, salt marshes and maritime heath rich in wildflowers on the reserve in the summer months. If you travel into the main village, Pierowall, head to the picturesque Gill Pier for a view of the bay. 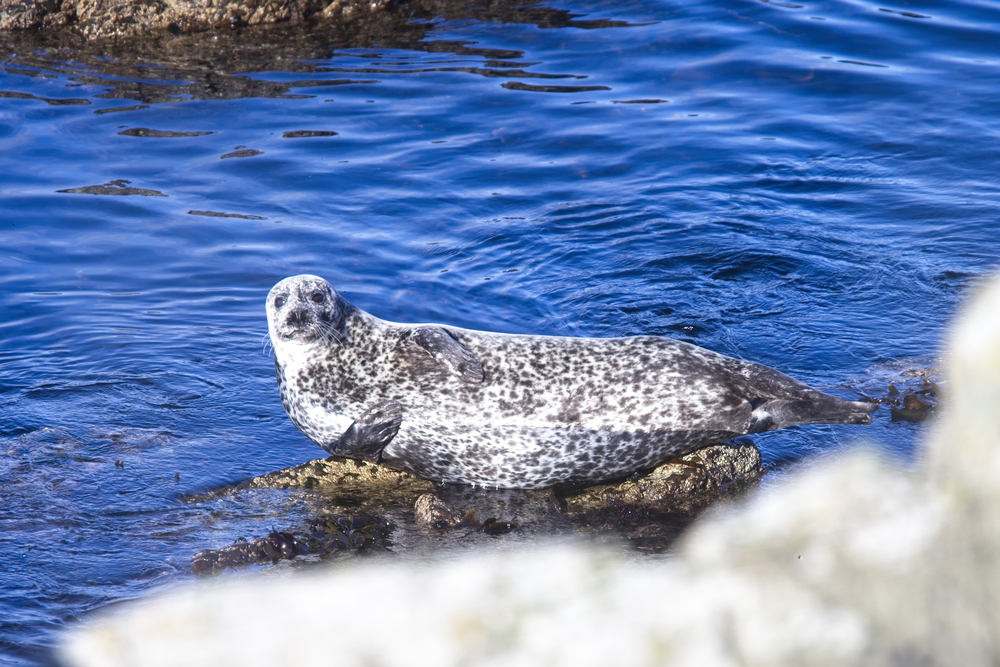 Escape to Scapa Flow in Kirkwall

Nature and history frequently collide on the Orkney Islands, and Scapa Flow is no exception. This maritime historic wreck site was formed thanks to the collaborative effort of maritime archaeologists, dive-boat operators, historians and divers, and it has turned into one of the top diving destinations in the world. If you are an expert diver or you dive for sport, you can visit underwater wreck sites in the heart of Orkney waters. Along the way, you’ll witness a variety of wildlife darting in and out of the wreckage and soaring high above the waters. Ecosystems of ocean-bottom animals such as urchins and starfish splatter bright colors on each wreck site while crabs and lobsters lurk in nooks. 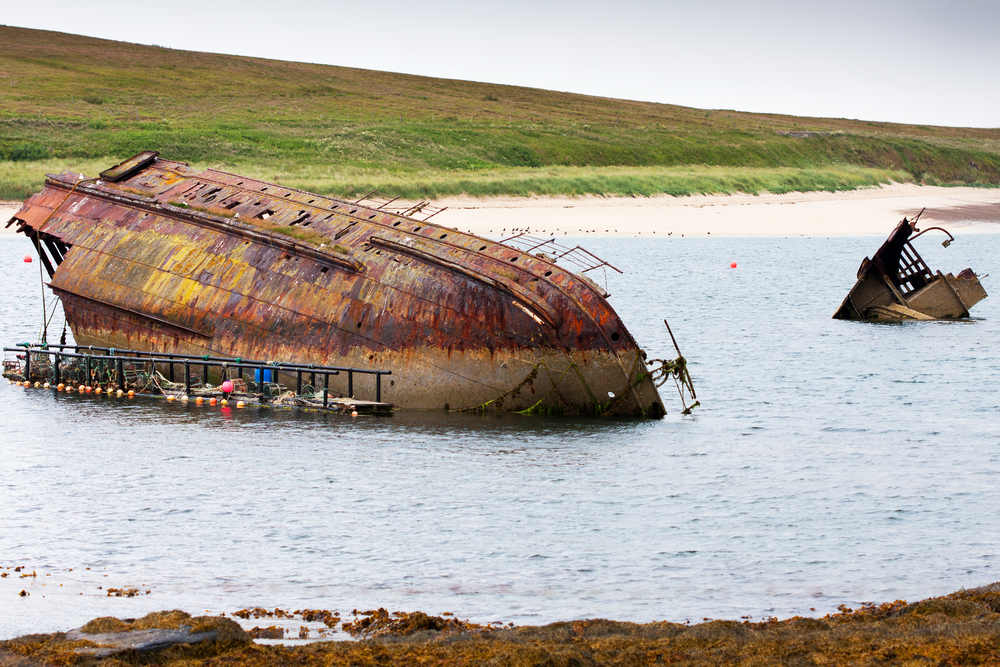