So vast, sprawling and legendary that even those who live there might justly claim to only ever scratch its surface, Los Angeles can be as bewildering as it is thrilling. Our advice? There are some destinations where the gentle pace soothes you into taking your time and not trying to cram too much in, where you’re lulled into savoring every moment. Not L.A. Fast-paced and brazen, allow yourself to get swept up in its throb and just do it, do it all. You can relax some other time.  See these things to do in Los Angeles.

Holding court on the ground floor of the Homer Laughlin Building since 1917, this market has withstood the proliferation of chain food retailers seen in the latter half of the century and has something, quite literally, for everyone, whether you’ve come to fill your belly or feast your eyes. Lunch hour is incredibly busy, so be prepared to stand in line - or plan your visit for another time of day and opt to grab breakfast from Eggslut, or to wolf down a hearty evening serving of spaghetti and meatballs from Knead & Co. Don’t forget to check out each vendor’s retro neon signage as you make your way around - it’s one of the market’s most beloved features. 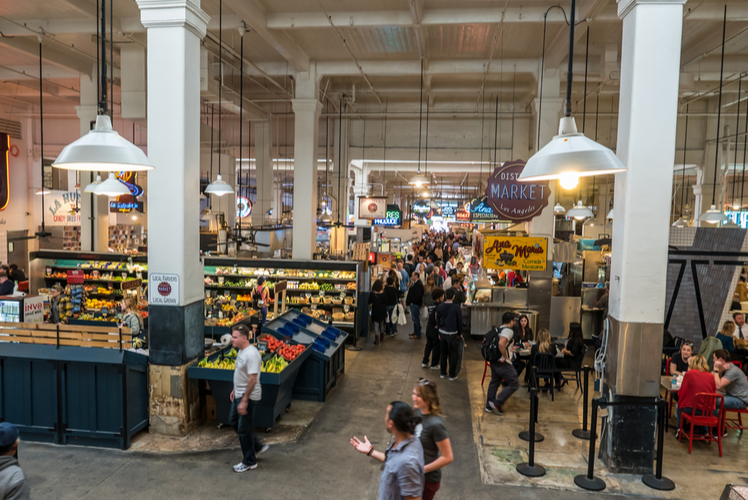 An outdoor amphitheater is pretty much always a thing of beauty, but when it’s cradled by the Hollywood Hills it takes on an extra special something. There’s an impressive line-up of events and performances throughout the year, so try to grab one of the 18,000 seats to one of them if you can - but if not, the space is used as a public park and therefore still available to visit. Pack a picnic and settle down in one of the Bowl’s fourteen surrounding picnic areas to enjoy the view and the sensation of being in such an iconic space. 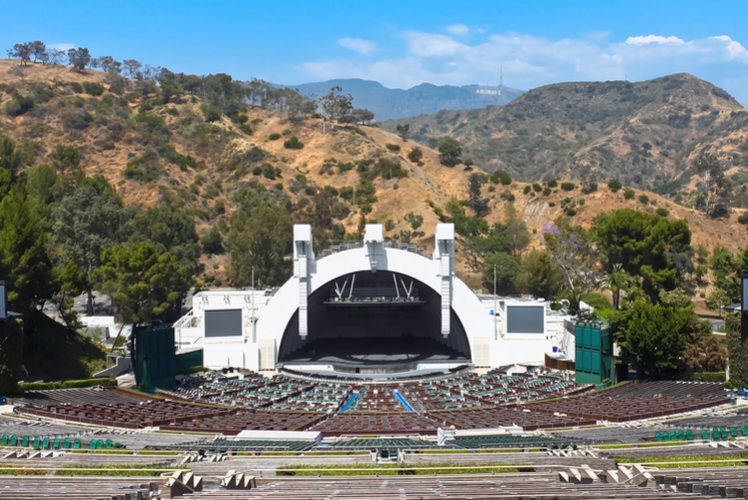 Take a break from the shopping, clubbing and beaches - L.A is also home to some spectacular and easily accessible nature. This hike, in the Pasadena area, can get crowded on weekends, so aim to do it on a weekday when the locals are at work - this also means that, if you’re driving, you’ll be able to eliminate a section of the trail and park (there’s no parking on weekends) to hike to the base of the waterfall in under an hour and really feel like you’re a million miles away from the bright lights of the big city. 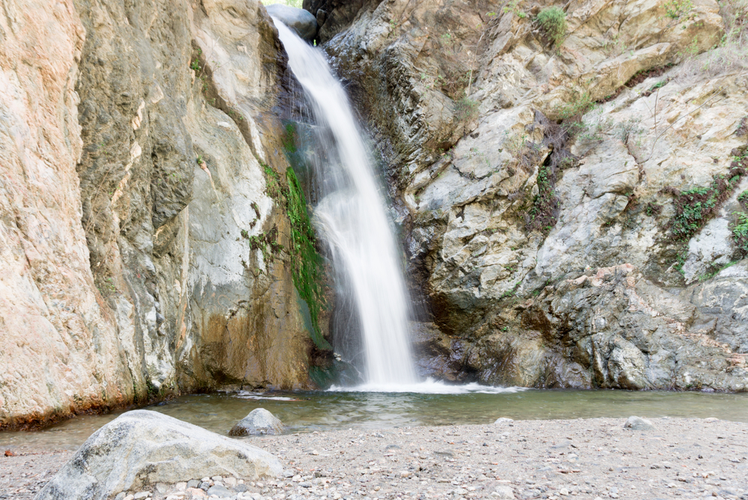 It’s definitely more upmarket than it used to be - and the tourists who come to check it out probably dilute its quirkiness somewhat - but Venice Beach is still a magnet for folk from all walks of life and, as such, an epic spot for some people watching. You’ll see skateboarders, roller bladers and body builders, as well as the occasional person with a rat or snake casually hanging out on their shoulders. And that person over there shouting? Don’t take it personally - they have a cause they’re passionate about and they’re pretty keen for the whole beach to hear about it. 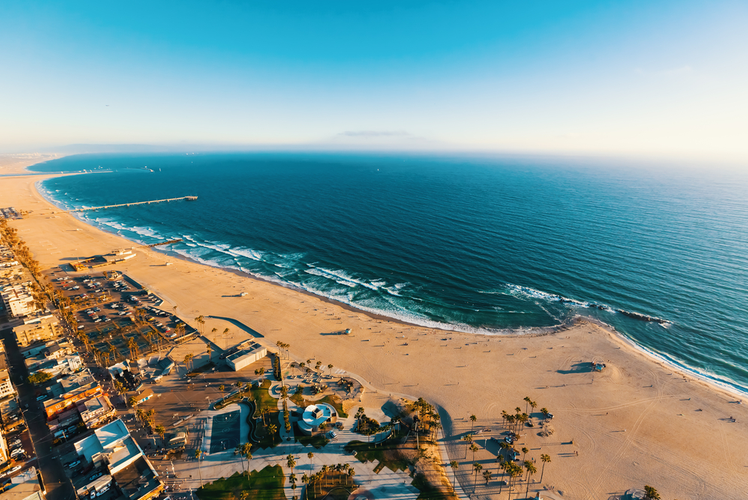 You may see the occasional Hollywood star (or at least B-lister) while you’re in L.A but even if your celeb spotting attempts don’t come to much, you can’t possibly miss the Hollywood Walk of Fame, where around 2,500 names from the world of entertainment have been immortalized in pink and gold (more subtle than it sounds!). Donald Trump’s star has been vandalized more than once, so you may not get a chance to stamp on see it, but there are plenty of genuine film icons, both past and present, over which to linger, as well as the hand and footprints of celebrities at the Chinese Theater against which to compare your own measurements. 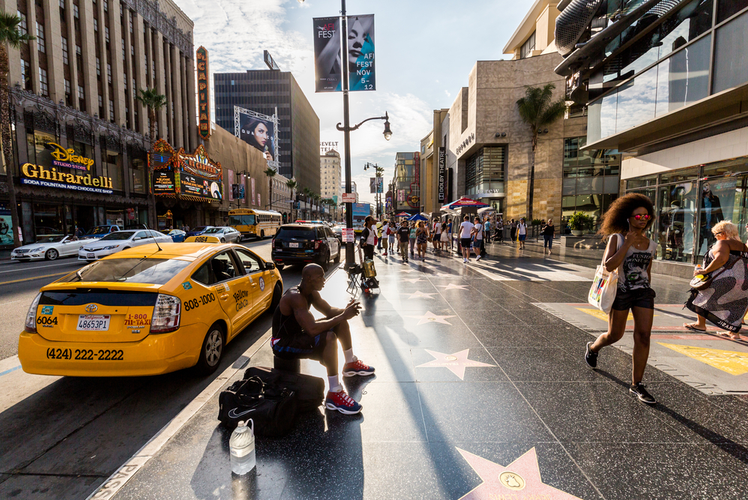 Its position, atop a hill with epic views over L.A - think hills and oceans to the west and Downtown to the east - is just the start of it. Be sure to spend some time walking in the gardens, where sculptures from the likes of Miró and Moore are to be found. The collections are spread over four pavilions and, inside, artworks span a broad spectrum, with masterpieces by Rubens, Renoir, Van Gogh, Monet and Cézanne, as well as works in the more contemporary medium of photography. The 17th and 18th century decorative arts are also strongly represented - mostly French, these pieces are the focal point of the South Pavilion’s ground floor. 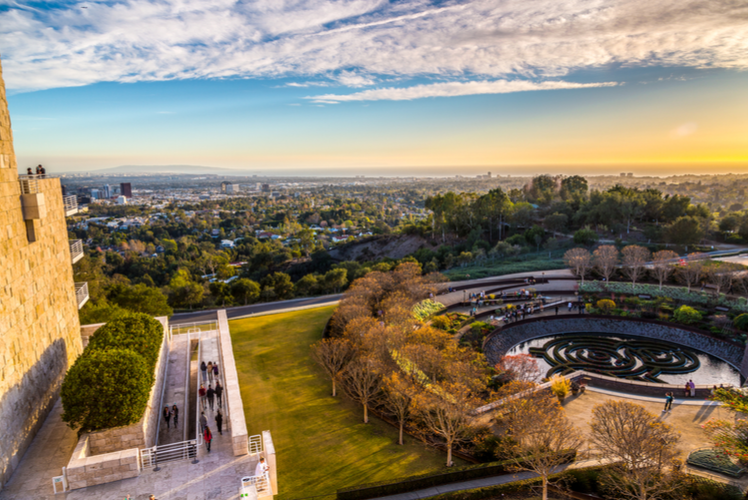 Sure, we don’t all have Richard Gere’s credit card at our disposal (and, given the circumstances, we probably don’t want it) but a leisurely stroll along this famous shopping strip, which has been cobbled in an effort to make it look sophisticated and European is surely an LA rite of passage. The designer boutiques here require some serious spending money, so if your pockets are more Gap than Gucci, just assume the role of spectator and check out the people with real spending power flexing their retail muscles. Not far from Rodeo Drive, you’ll find Anderson Court, which is worth a look if only for the fact that it’s the only shopping mall ever designed by famed Chicago-based architect Frank Lloyd Wright. 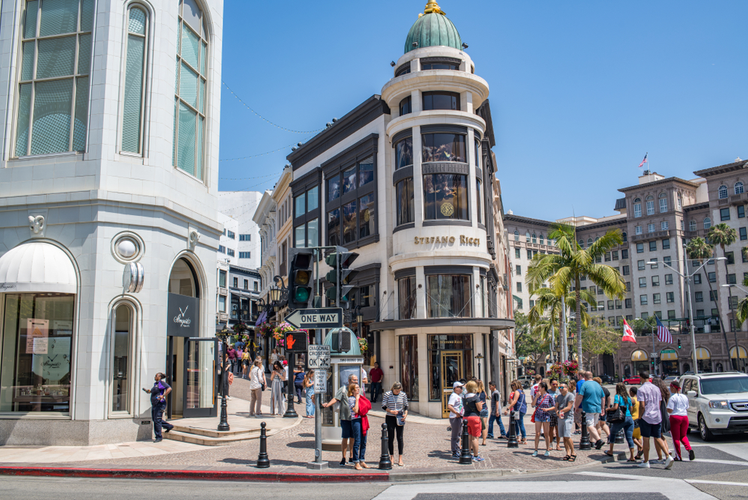 LA has more than its fair share of rooftop bars, but that’s more to do with seeing and being seen than it is to do with sweeping views - a fact that smog may be more than a little bit responsible for. Even on days when the skyline is all but obliterated by haze, however, it’s worth scooting up to the U.S Bank Tower’s 70th floor, if only to come down again at lightning speed - that’s right, there’s a glass slide attached to the building’s exterior and you can hurtle down it, if you dare. The stomach-lurching sensation is real but don’t worry too much - you’re fully enclosed, the slide only takes you down one floor and it’s all over and done with in the space of a few seconds. 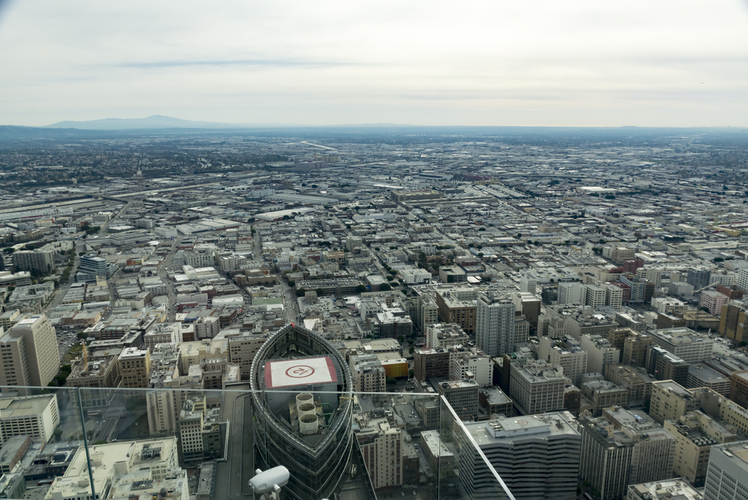 In a city where there’s no shortage of architecture and art to admire (The Walt Disney Concert Hall springs to mind) , the Watts Towers are genuinely a sight to behold. Built over a period of 33 years - from 1920s through to the 1950s - these 17 interwoven sculptural pillars were created by Italian immigrant Sabato “Simon” Rodia, who was both an artist and construction worker. Decorated with random objects and fragments of bottles and tiles, they are free to visit in the Historic Park named after the artist in the city’s Watts neighborhood. 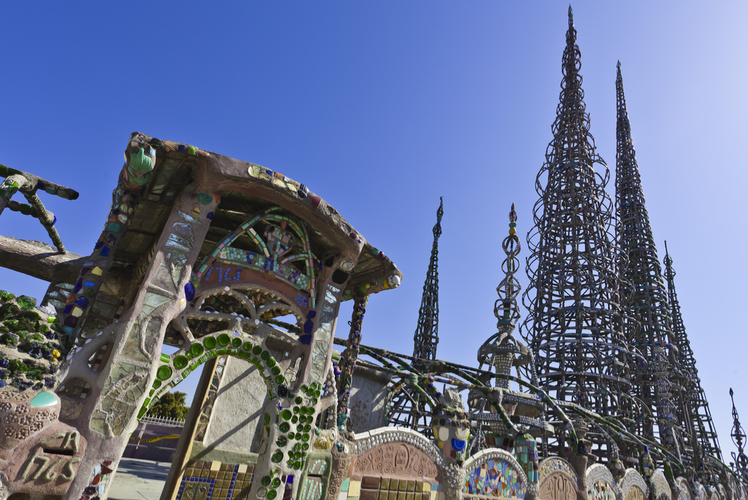 As exciting as Los Angeles is on a visit, you can see why those who live there might occasionally get a little exhausted by its pace - which is why locals head for the National Forest when they need to reconnect with nature. Even if you don’t live in LA full time, it’s worth setting aside a day to explore this accessible wilderness, which covers over 1,000 square miles and holds 53 trailheads. Best for those with limited time? Devil’s Punchbowl and the Bridge to Nowhere can both be knocked over in a day, while those with a set of wheels can cheat by driving up Mt Baldy and soaking up the panoramic views. 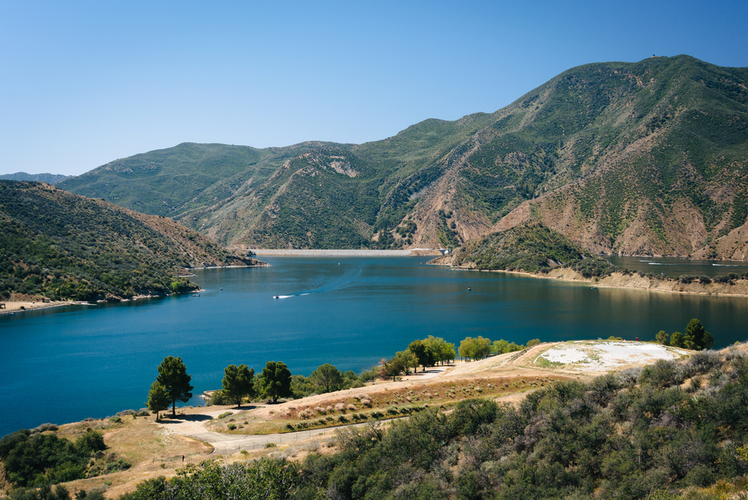 Come on - it’s practically an obligation that you spend a day in the world of Mickey, Donald and co while you’re in this part of the world, isn’t it? Disneyland is a legendary, known to children the world over - even those who have very little likelihood of ever riding its rollercoasters. Spread over seven ‘lands’, there’s far more to this theme park than just rides - although the Finding Nemo Submarine Voyage and the Indiana Jones Adventure must not be missed - you can also take a trip back in time as you wander down Main Street USA, as well as enjoying the musical offerings of New Orleans Square. 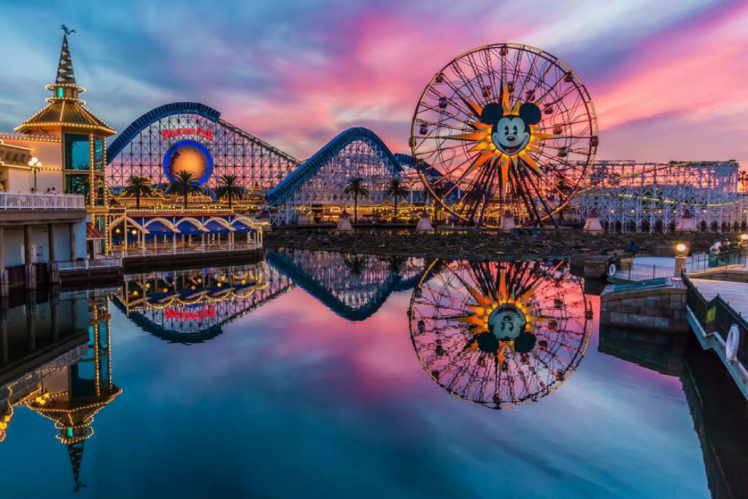 For star spotting of a different kind, jump on the DASH bus from the Vermont/ Sunset Metro Red Line station up to the observatory, which opened in 1935 and was reopened to the public in 2006 after a massive, $93 million renovation project, which kept it closed for 4 years. Visitors can look through telescopes and watch live shows and projections in the Samuel Oschin Planetarium. Admission to the grounds and building is free - and another enticement is the fact the lawns outside are prime Hollywood-sign viewing territory. Time permitting, you can even hike to the sign from here, but be aware that it’s further away than it appears. 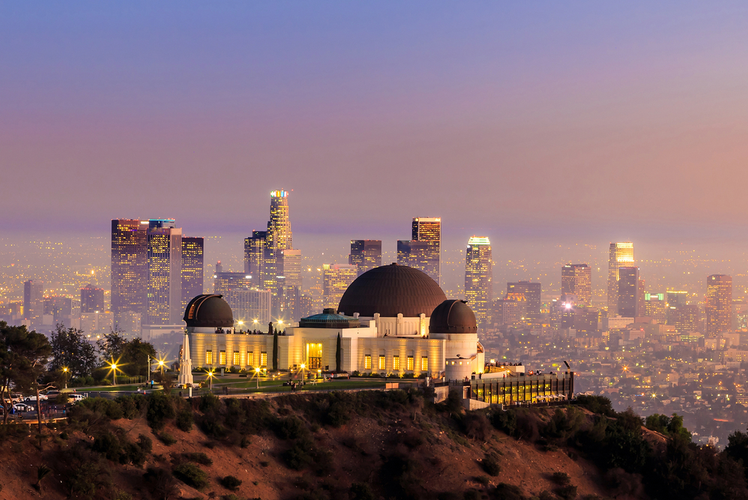 An evening in a Hollywood mansion sounds exciting enough but how about a Hollywood mansion at which illusionists and magicians perform nightly, and to which you have to be dressed in vintage formal wear and bear an invitation from one of the performers? Prepare to be dazzled and bewildered - the scope and variety of acts you’ll see in the space of a night will force you to suspend your disbelief like never before. And as for how to score one of the elusive invitations? No sorcery necessary - just find out which magicians are performing on the night you want to visit and drop them an email in plenty of time, asking them to please invite you. You can mutter ‘abracadabra’ a few times to yourself too, if it makes you feel more proactive. 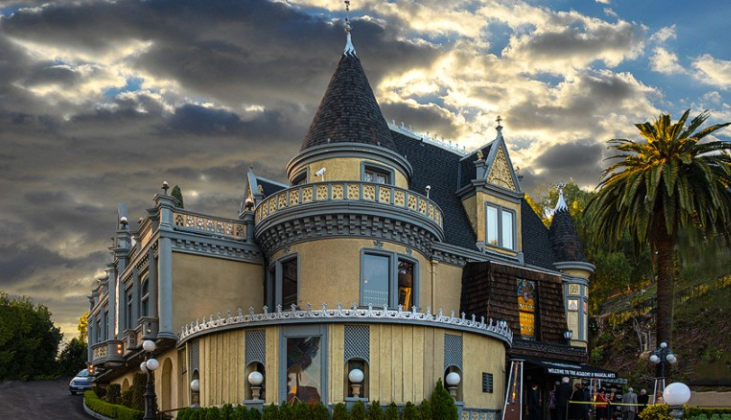 Held in the grounds of the Rose Bowl, you’ll need to time your trip to LA right if you want to factor this one in to your plans - it’s only held on the second Sunday of each month. Then again, it probably takes everyone a month to recover once they’ve been here - there are literally thousands of vendors and shoppers, all engaged in transactions over innumerable items, ranging from larger pieces, like mid-century modern furniture, to vintage clothing, rare vinyl, old books and trinkets of all kinds. Come to think of it, it’s a great place to come for your outfit if you’ve managed to score an invitation to The Magic Clubhouse, too. 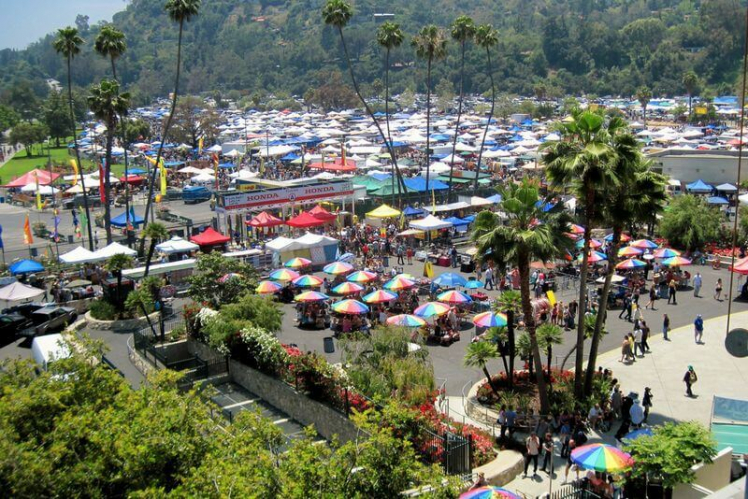 Everybody comes to LA to be in the movies, right? Well, maybe that was the case once upon a time but even now, the city is rich with its filmmaking heritage and for anyone who’s ever, like, seen a film, this attraction will be one of the high points of their trip to L.A. More movies and TV shows have been filmed here than any other lot in the world, so take a tour to come face to face with Jaws and King Kong, to claim your reservation at the Bates’ Motel and to view extraordinary examples of set design. Naturally enough, there’s an IMAX theater here, as well as a Harry Potter theme park where you can channel your inner boy-wizard. 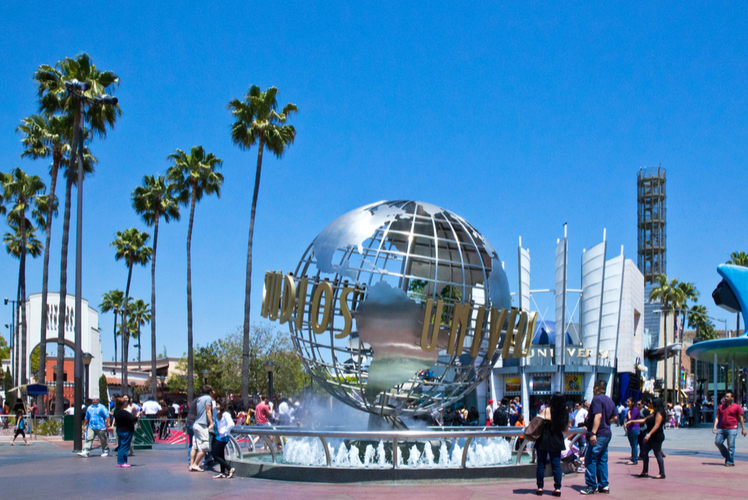 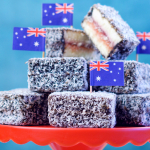 Sweet Tooth? 30 Sugary Confections You Have To Try On Your Travels