Things to do in Amsterdam

As one of the most popular city destinations in the world, Amsterdam’s appeal is easy to comprehend. The wealth of historical and cultural attractions from biking the streets and cruising the canals, to soaking up the cafe and pub culture, to immersing yourself in some of the most impressive collections of art in the world - here’s the lowdown on things to do in Amsterdam.

If there’s a cultural epicenter to this city, which is crammed full of cultural highlights, then this green 19th century space is it. Renovated in 1999 by the Swedish landscape architect Sven-Ingvar Andersson, its appearance now matches its significance, bound as it is by the Rijksmuseum, the Van Gogh Museum and the Stedelijk Museum of Modern Art (all of which should be visited during your stay) Used for large-scale events like concerts and festivals, as well as lower-key activities like markets and open air exhibitions, in summer, there’s a paddling pool in which to dip your feet and cool off; in winter, the concept of ‘cold feet’ takes on a whole new significance as the space is transformed into a huge open air ice rink. 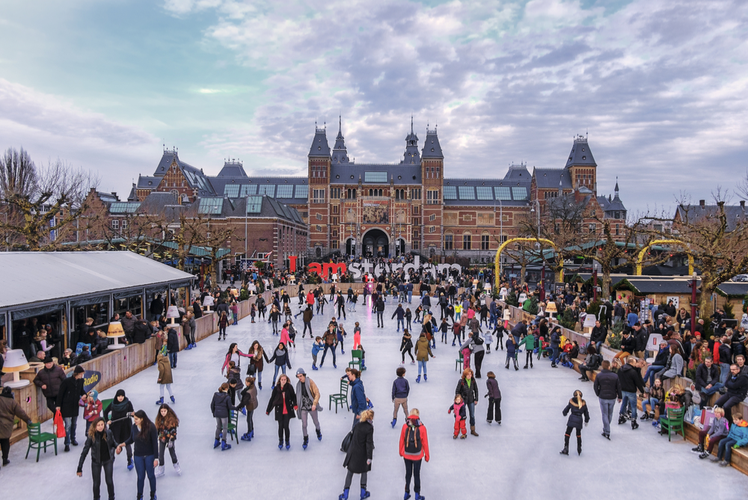 Queues to this attraction - if a site of such poignancy can be called such - are often long, and with good reason. Even if you’ve never read the heartbreaking diary of Anne Frank, you’re certain to know of the story of the courageous girl and her family, who sought shelter from Nazi persecution by remaining hidden in this house for two years. The front of the house functions as a museum but the back section has been preserved to give a sense of the conditions in which the Frank family existed for all that time. It’s not something that you want to miss seeing while you’re in Amsterdam, so book your tickets online to minimize waiting time. 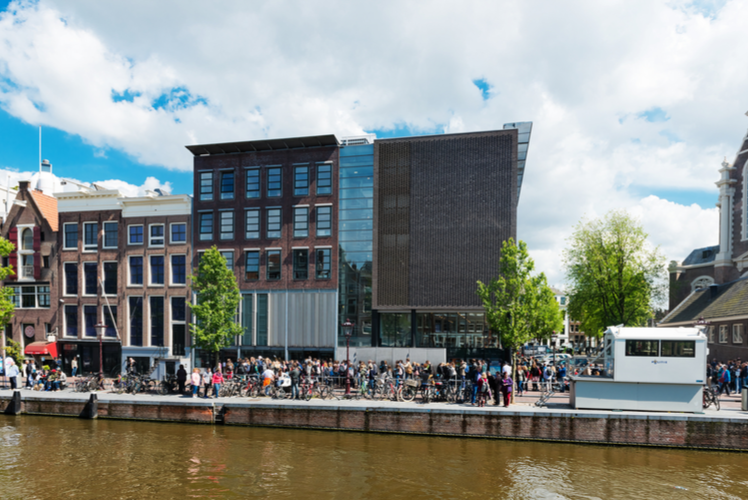 Created in the 17th century to keep the sea at bay, the canals here are iconically, unmistakably, quintessentially Amsterdam. Exploring them on foot by day is something you’ll inevitably do as you make your way around the city, traversing its many bridges and strolling along the banks - but make a point of returning after nightfall to experience how enchanting they are when illuminated in the dark. The perspective you get from the water is well worth booking a cruise for, and there’s a variety to choose from, so whether you prefer or deplore commentary, want to dine or just want to gaze, you’ll find something that suits you. 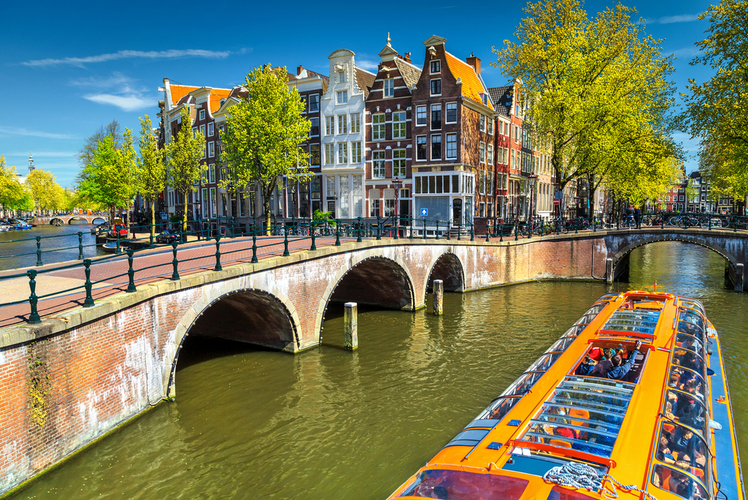 As the tallest tower in central Amsterdam, the wonderful views from the top make the 40 meter climb more than worthwhile. It’s also very pretty from ground level, so take the time to appreciate its looks, which date back to 1638, while you warm up with a few lunges before tackling the trek to the top. Rembrandt’s final resting place is in the church below, so be sure to check that out too, especially if you’re waiting for access to the tower: only six people are allowed up on a guided tour every half hour, so you’re best advised to turn up at the beginning of the day to reserve the time slot you want. 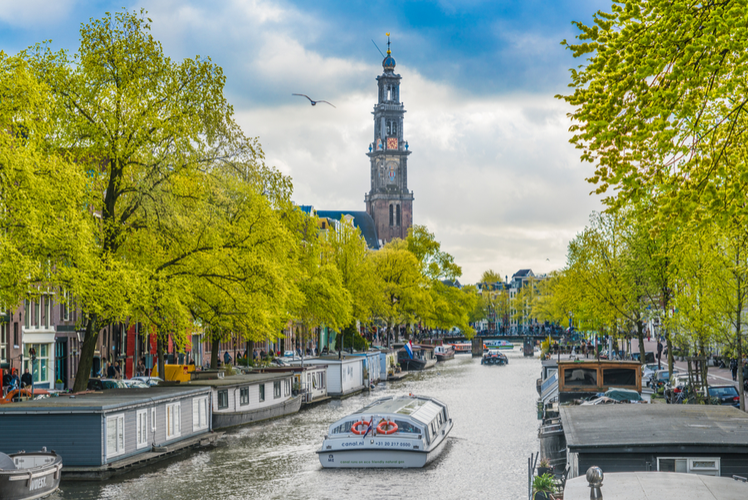 This vast green park is one of the most relaxed spaces in the city - quite literally, as until recently, it was the only public park in the world in which people could legally have sex. Don’t be tempted to give this a try, however, as it’s no longer tolerated - but there’s still an overall laid-back feel to the place, where people come to hang out, work out and yes, smoke marijuana. There are miles of tree-lined trails to wander and huge expanses of grass on which to lounge - check out the open-air theater, at which performances often take place, and if the scent of other people smoking is getting you down, make your way to the beautiful rose garden, where there’s a heady scent of a lovelier kind. 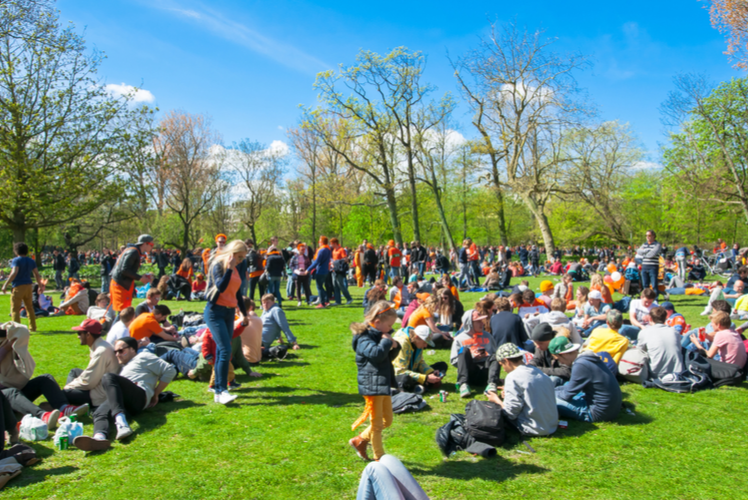 This is an Amsterdam institution, a free-to-join roller skating session which sets off from the former Filmmuseum in the Vondelpark at 20.15 every Friday night. The route varies week to week and takes just over two hours, winding through about 20 kilometers of the city and giving participants a wheely different perspective of its charms. Okay sorry, that was lame. Check ahead to see if the skate is happening, because weather can occasionally put a stop to proceedings, and don’t worry if you didn’t happen to include your skates in your luggage - after all, they’re not usually top of anyone’s packing list and there are rental stands near the park’s entrance anyway. Look out for specially themed events, at which dressing up is encouraged. 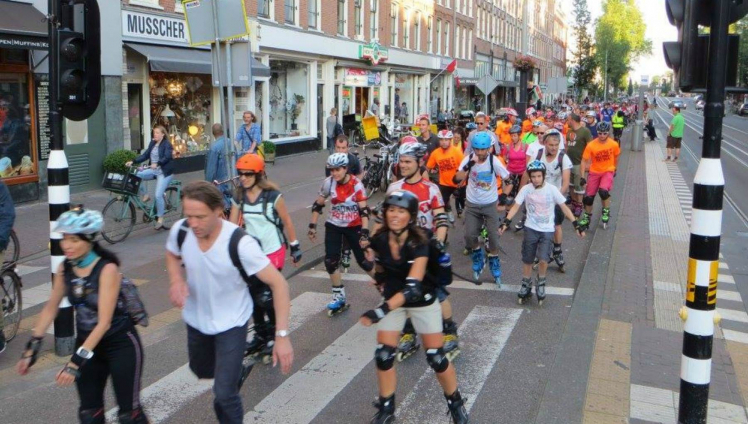 7. Over the Edge swing

The A’dam Lookout is a cool observation deck on top of the A’dam Tower in Amsterdam North, from which you’ll get sensational 360 views of the city and its lovely network of canals. There’s an interactive exhibition showcasing Amsterdam’s history and culture, but to really take your experience up a notch, take a seat on the ‘Over the Edge’ swing, where you’ll swing back and forth 100 meters above ground level - literally coming over the edge of the sky deck. A word of warning - if your stomach lurches at the 22 second elevator ride that brings you up to skydeck level, the swing probably isn’t for you. 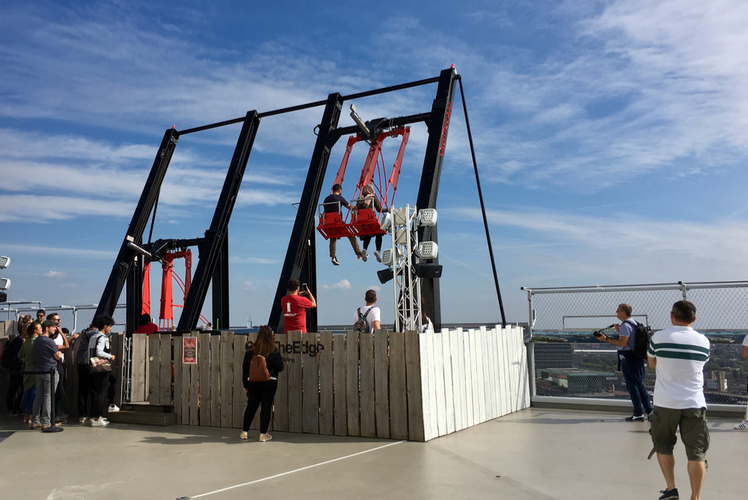 Windmills are synonymous with The Netherlands, the subject of endless postcards and picture books - yet there are only eight remaining in Amsterdam. The easiest of these to reach is de Gooyer, in the Eastern Islands (Oostelijke Eilanden) neighborhood. It’s only about 4 kilometers from the Central Station yet feels a world away, surrounded by sparkling water on every side. When you get there, you’ll most definitely be in need of some form of refreshment so, luckily for you, there’s an acclaimed microbrewery located right under the windmill’s graceful sails. Grab a beer to drink on the outdoor terrace or sign up for a guided tasting tour. 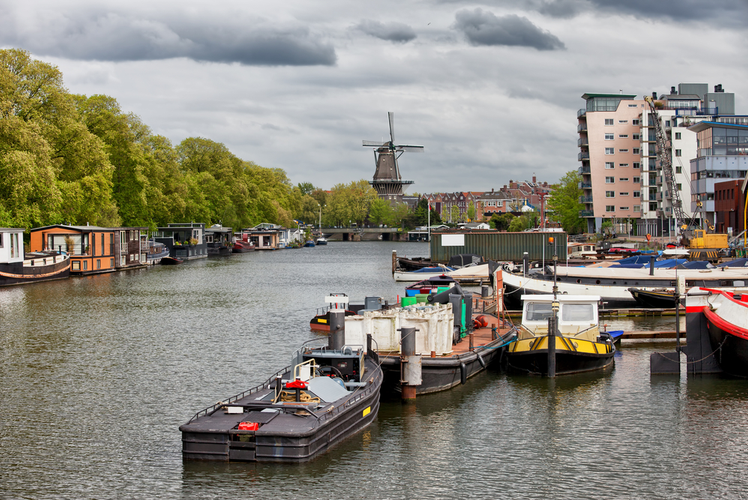 One of this historic neighborhood’s most famous draws is the Anne Frank House, but be sure to allocate some time to wandering its maze of narrow streets and admiring its quaint buildings and tiny courtyards. Once a working class area, gentrification has now studded it with cool places to eat and drink, as well as a slew of galleries and boutiques. Check out the Woonbootmuseum, the only houseboat museum in the world and have a browse of the Lindengracht Market, which heaves with activity on a Saturday. Even if you can’t take all of the cheese, fresh fish and profusions of flowers home with you, you won’t be able to resist picking up a couple of knick knacks made by local artisans as a memento of your stay. 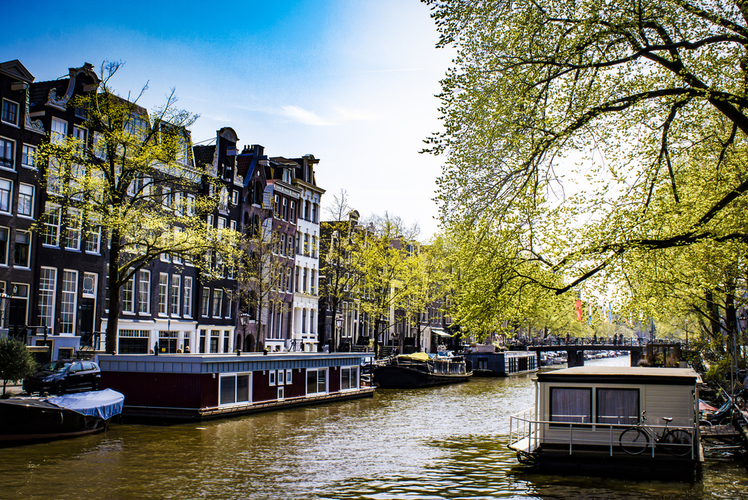 We’ve all heard about ‘hygge’ - that Scandi word that evokes a feeling of cosiness and glowing good feels, right? Well, the Dutch have a similar word for when everything feel wonderfully relaxed and happy - it’s ‘Gezelligheid’ and nowhere will you find a better place to imbibe it - along, of course, with a locally brewed beer - than in one of Amsterdam’s many bruin cafes (brown cafes). These traditional pubs take their name from the color of their wooden panels (and. most likely, their tobacco-stained walls) but in any case, they are fabulous places in which to sit and put the world to rights. Café Hoppe is a good place to start - located near the flower market, it’s old school conviviality at its finest.

If felines are your preferred pet, you’ll no doubt understand the motivations of Bob Meijer. A successful banker, he poured some of his wealth into setting up the Kattenkabinet when his beloved kitty (named - wait for it - John Pierpont Morgan) died. In keeping with his devotion, the museum is stuffed full of artworks in which cats feature. It’s a delightfully quirky place to visit, but there are some genuine masterpieces to be found, as well - among them a Picasso and a Rembrandt. There’s a shrine to John Pierpont Morgan but there are also plenty of live cats strolling around the premises, keeping the memory of JPM alive (or, more likely, spitting at the mention of his name. Cats are like that.) 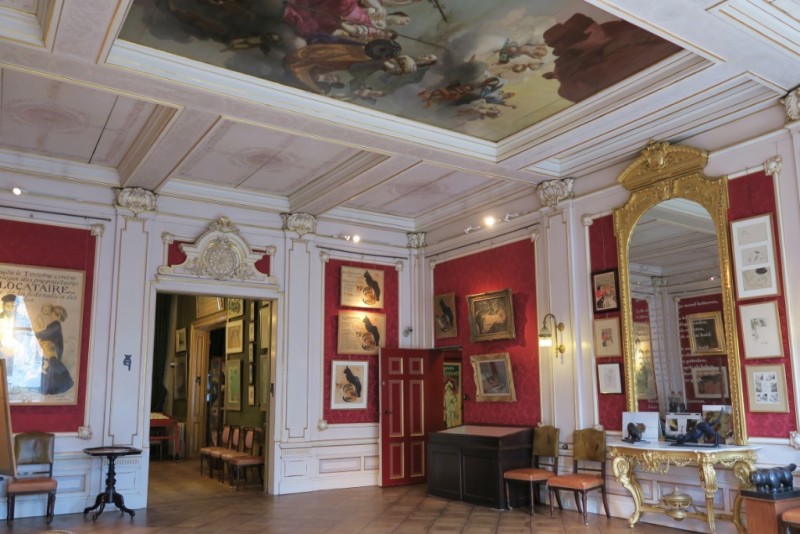 Completed in 1903, Amsterdam’s former stock exchange was so celebrated that its creator was dubbed the ‘Father of Modern Dutch Architecture.’ H.P Berlage may have drawn heavily on Dutch tradition, with the patterned brickwork that’s a distinctive feature of the building, but elements like a strong lines and geometric influences give the building a unique aesthetic that’s very much of the 20th century - not to mention the fact that many of the building’s structural elements are showcased rather than concealed. The interior of the building also demands to be seen, but this is only possible if you book for one of the exhibitions or concerts occasionally held here; if time or interest dictates otherwise, then head to the cafe in the former entrance lobby: it only gives an idea of the interior, but at least it’s open daily. 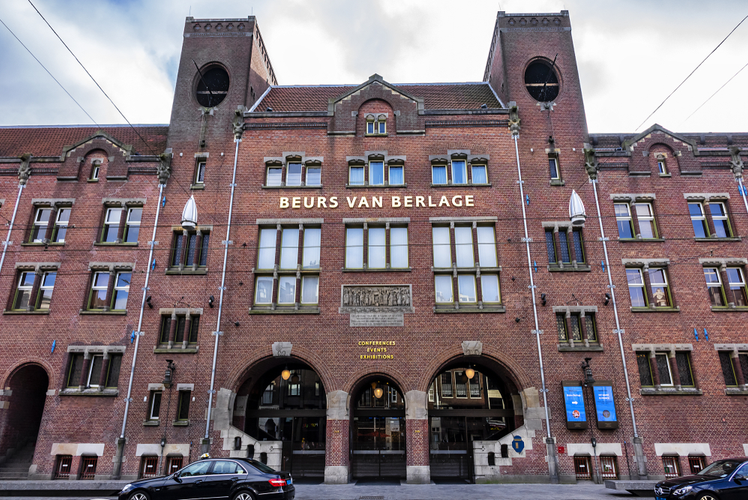 Located on the edge of the Jewish Quarter, Rembrandt bought this house in 1639, allegedly influenced by his fascination with Hebrew culture and the fact that Jewish people were his preferred models for religious paintings. He was, at the time, at the height of his fame and wealth, a fact that’s reflected in the undeniable grandeur of the house; it has now been carefully restored with reference to old plans and writings. If you’re lucky, you’ll be able to catch an etching or traditional paint-mixing demonstration in his studio. The etching insights take on even more of an allure when you examine the considerable collection of this type of artwork held here; in particular, don’t miss the series of miniature self-portraits, featuring Rembrandt hamming it up with silly faces.

Don’t be fooled by its fairly unprepossessing exterior; there’s a reason why the Royal Palace was dubbed ‘the Eighth Wonder of the world’ back in the 17th century. At the time, it was Amsterdam City Hall; the city was at the pinnacle of its glorious golden age, renowned for its mercantile successes. The building was very much a celebration and expression of this, with absolutely nothing in the way of self-deprecation or modesty forming any part of it - as an example, check out the brass-inlaid floor maps depicting the worlds of both heaven and earth, with Amsterdam squarely at the center. The marble-encrusted main hall is quite neck-craningly something, too. 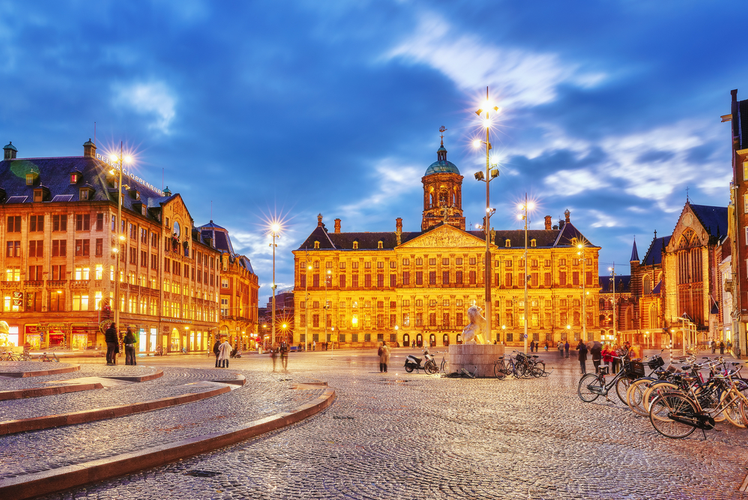 Forget your allergies - you’re in the Netherlands and it would surely be entirely inappropriate not to engage in a bit of tulip appreciation while you’re here. Amsterdam has the world’s only floating flower market - and a deeply historical one too: the barges moored to the southern side of the Singel canal have been home to it since 1862 with the intention of facilitating the bulb and bloom trade in and out of the city. The flower market may not be the hive of frenzied activity that it was back then, but it’s still home to around 15 florists, whose wares range from freshly cut flowers to vacuum-packed tulip bulbs. 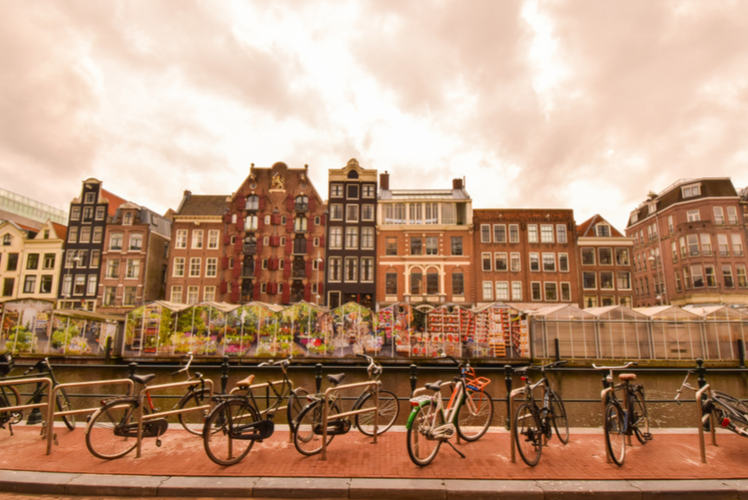