Things to do in Mexico City

The second largest city in the world, Mexico City is built, quite literally, on shaky foundations: throwing soil into a lake and building a series of cities on it has resulted in some of the off-kilter architecture you’ll see today. Yet for all of that, it’s a glorious and proud place, one that’s set the stage for revolution and independence, and one that’s home to a mind-bogglingly vast number of people. For a taste of what this capital has to offer, here’s a - by no means exhaustive - list of things to do in Mexico City.

Once an Aztec marketplace, this municipal park dates back to 1529. You won’t see much in the way of trade or commerce here these days but it serves as a pedestrian-friendly hub, which is great for people watching and getting a sense of how the locals live when they’re off duty, whether it’s overseeing their playing kids or just chilling in groups and taking some time out in the sunshine. Check out the Palacio de Bellas Artes - located at one end of the park - and then refuel at the cafes and bars down the other end, making sure to inhale the scent of the lavender fields as you pass them. 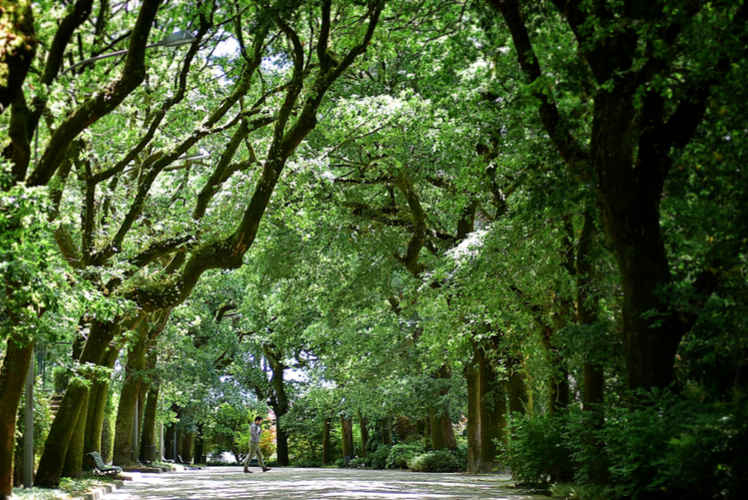 Its name means ‘Main Temple’ and in modern, bustling Mexico City, it’s almost impossible to believe that there are any remnants of Aztec culture at all, least of all one dating back to 1325. That said, little remains of this structure, which was once the focal point of Tenochtitlán, the ancient Aztec capital: during the Spanish conquest of 1521, it was razed to the ground and a cathedral was built of the top of it. The well thought-out museum offers lots more insights and helps to paint a picture of this legendary civilization which might be otherwise difficult to conjure up. 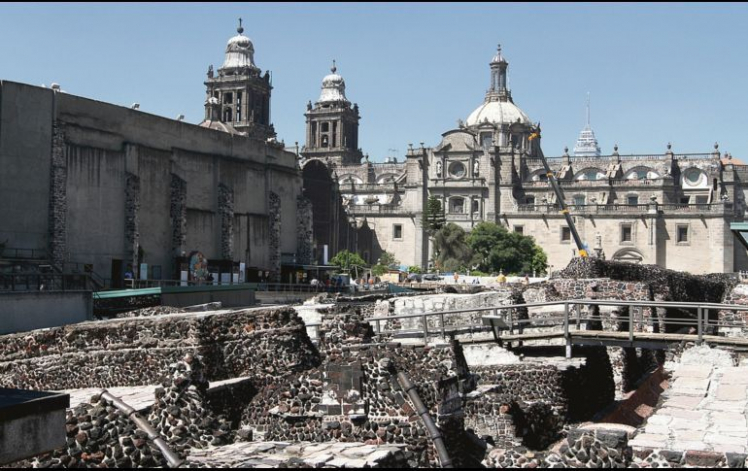 Endlessly instagrammable, due in some part to the heavenly blue cobalt of its exterior walls, this home represents the entire span of artist Frida Kahlo’s life - she was born and raised here, lived and worked here, and eventually died here. There’s a small collection of art works to be seen, both by Kahlo and Diego Rivera, her husband, as well as a selection of their contemporaries, but the most interesting (albeit somewhat voyeuristically unsettling) aspect of a visit is the way that the house has been preserved with such an astonishing attention to detail, ranging from the mundanely domestic to the more intimate and personal. 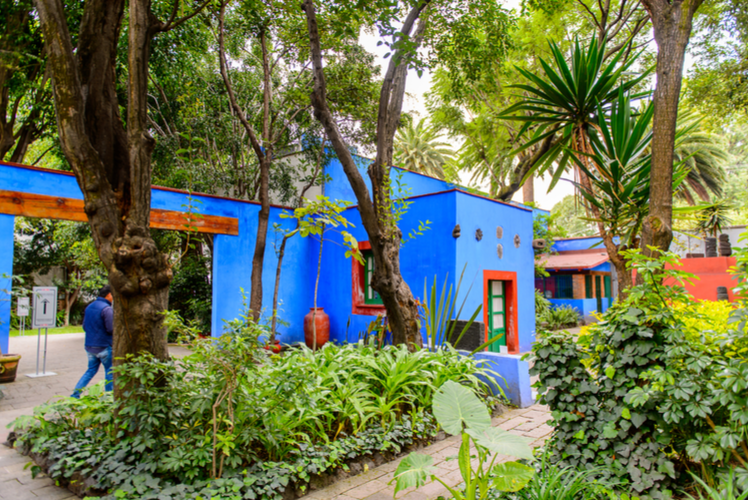 Churros, the deep-fried pastry treat that’s kind of like a donut that didn’t quite achieve its ring shape, are perhaps frequently associated with Spain - but let’s not forget which country gave us the rich creamy chocolate into which they are dipped, right? Churros in Mexico City are among the best you’ll have in the world but for an experience from the masters, head to El Moro in the Centro Historico. This revered institution has been producing this sinfully good combo since 1935 and this particular branch is open 24/7; its gorgeous blue-tiled interior makes a visit worthwhile, even if you’re a gluten and dairy avoider. 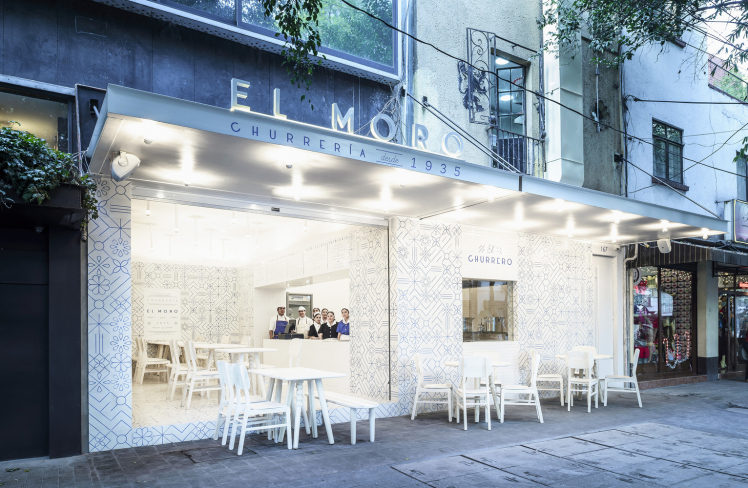 Until 1984, this was the tallest building in Mexico City, but it’s still one of the most recognizable landmarks in the downtown area. A viewing area, at a height of nearly 600 feet, is the place to head for a bird’s eye look at the sprawling vastness of the city, as well as the tightly packed gridlock, which by now you will have no doubt experienced from ground level. Try timing your trip for just before evening, so that you can see the city in daylight, catch the sunset and then see the city illuminate its way into its nighttime guise. 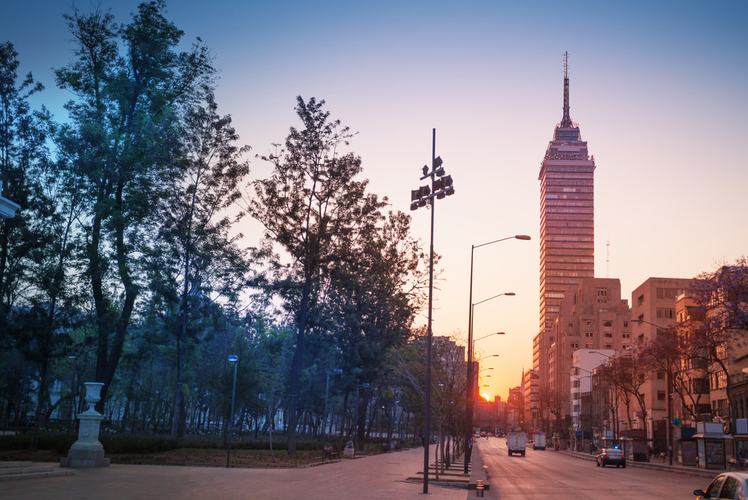 With an Art Nouveau exterior making it impressive enough from the outside; this significant performance space first came into being under the government of Porfirio Díaz - but although it was planned for Mexico’s Independence centenary celebrations of 1910, it was not completed until 1934. Incredible murals from the likes of Diego Rivera, José Clemente Orozco, David Alfaro Siqueiros, Rufino Tamayo and Manuel Rodríguez Lozano are just part of the incentive for venturing inside; it’s also home to the National Museum of Architecture and the National Theater. Interior surfaces of Carrara marble and a roof of iron and Marotti crystal are a feast for architectural eyes, while the recently restored main dome is nothing short of magnificent. 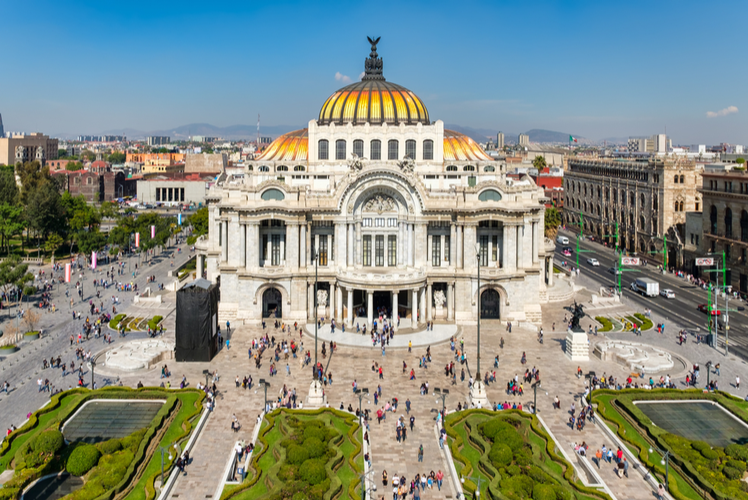 Referred to as the Venice of the New World, this series of man-made islands in the south of Mexico City is woven through by a network of canals. The whole area was once a lake, on which farmers made rafts of reeds, gave them a good coating of mud and then used them to grow food and flowers - the only extant example of traditional pre-Hispanic use of the lagoons in Mexico City’s basin. Designated a UNESCO World Heritage site in 1987, these floating gardens - chinampas - eventually rooted and became islands; they are now a highlight of a visit to Xochimilco (the name means ‘where flowers grow’) through which weekend visitors on colorful boats weave their way. 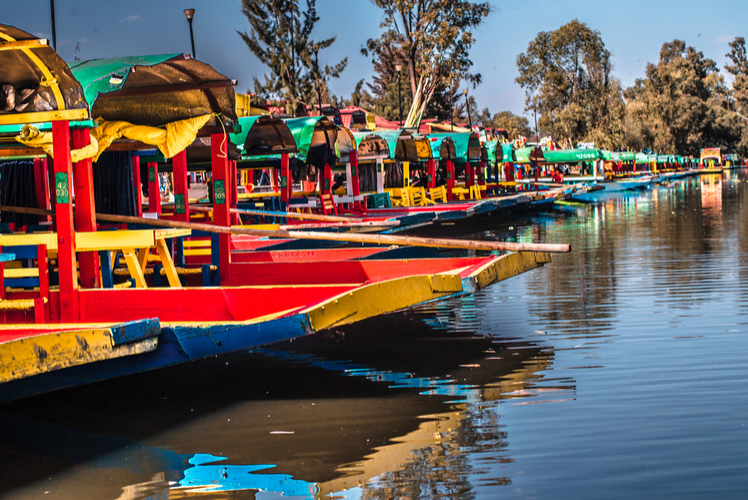 Many travelers plan their Mexico City visit for late October to early November, to coincide with the Día de los Muertos, and small wonder - when your similarly timed experiences have always been of a gaudy Halloweenish ilk, there’s something super-cool about this joyful celebration of the dead and departed that stems back to pre-Hispanic times. Color floods the streets of the city, with neon sculptures of other-worldly creatures, plus bright floral offerings draped over public altars and in cemeteries. There are, of course, also the ubiquitous sugar skulls, which are gifts to greet the dead back into our earthly world. Mexico City also plays host to a Day of the Dead parade, which is a spectacle of fantastically costumed and painted proportions.

Literally translated as ‘free fighting’, Mexican wrestling is instantly recognizable as such thanks to the distinctive masks worn by its participants. . There’s much more to the sport than these, however, not least the high-flying moves the fighters achieve and the fanbase they attract. The ‘fights’ are very much choreographed and performance-based, although not without their dangers (note the 2015 death of luchador El Hijo de Perro Aguayo); Tuesdays and Fridays are the nights on which to make your way to the Arena Mexico, where the crowds can get very loud and impassioned! Tickets are available on the night, although the best seats in the house tend to sell in advance. 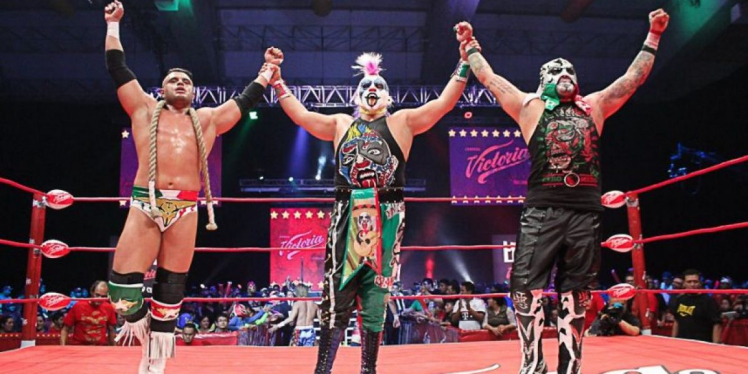 The fascinatingly superstitious side of Mexican culture comes to vivid life at this market, where you can find an (alleged) cure for just about anything that’s not going quite right in your life, be that a broken heart, an unfulfilling job or an annoying mother-in-law. Treatments range from potions, to spritzers dispensing holy water in a fine mist - and some of the vendors are as wildly bizarre as their wares. You can delve into religions as out-there as Voodoo and a particular type of Mexican sorcery called la Santa Muerte via Brujeria. In the same way that many people practise these forms of religion alongside devout catholicism, so too there is a large range of everyday items, like edibles or household goods, to be found juxtaposed with the esoteric. 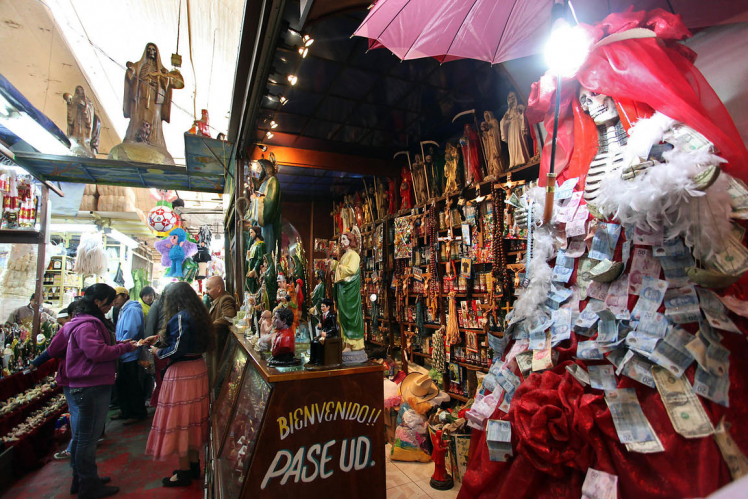 If you’ve ever looked longingly at any of those magnificent library images on Instagram - you know the ones, where books upon books are arranged on soaring shelves - and wished to visit just such a cathedral of literature, now is your chance. Completed in 2007, the Biblioteca Vasconcelos is, at 38,000 square meters, enormous - a fact that’s reflected in it generally being referred to as a ‘mega library.’ The building’s design, for which Alberto Kalach was responsible, is as noteworthy as its contents: transparent walls, slightly-off-kilter floors and an almost impenetrable maze of corridors to navigate gives a physical form to the idea of getting lost in books. 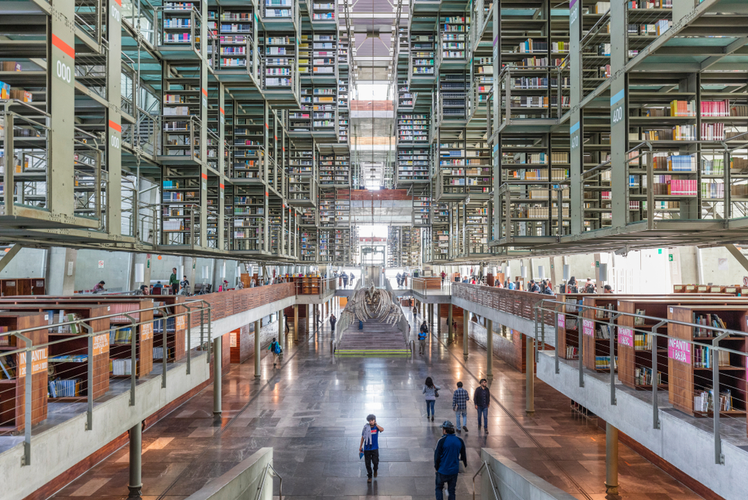 Those of a leftist temperament won’t want to miss the chance to visit the home of Russian Revolutionary Leon Trotsky, who was a major player in the fall of the Russian Empire. Whether or not the ensuing years of hardship and chaos would have played out in the way that they did if it had been Trotsky, rather than Lenin, who led the revolution - or even if had been Trotsky who seized power rather than Stalin - are questions for speculation - but the cold hard fact is that he was gruesomely assassinated right here in this house, with an icepick through the back of the head. Now a small museum showcasing a few of his personal belongings, the ashes of both Trotsky and his wife are entombed in the back garden of the property. 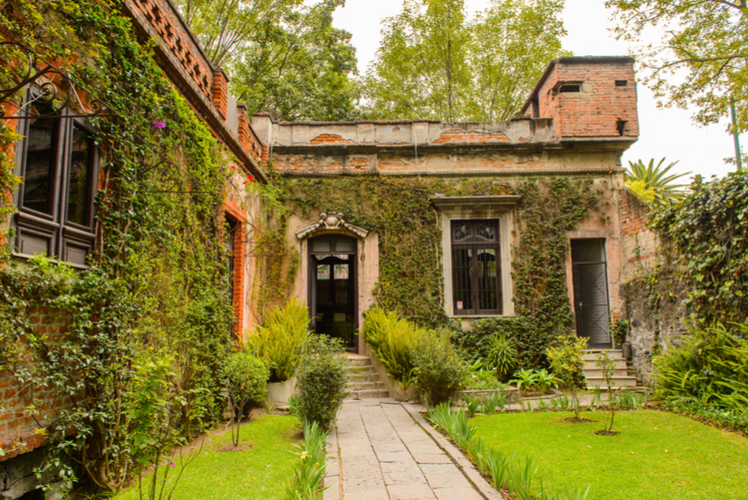 Cantina culture is one of those almost impenetrable things, but even if you never fully understand it, you have to at least experience it while you’re in Mexico City. Once solely the domain of men, more liberal attitudes in recent times have made it acceptable for women to enter a cantina too; traditionally, this was a place to come and drink, philosophize, enjoy a few on-the-house snacks and play dominoes or some other type of game. There are cantina tours available, or you could head straight for El Tío Pepe, which opened way back in 1890 and still has many of its original features, including a urinal running along the base of the bar. The most popular time for cantinas is late afternoon/ early evening so be sure to time your visit to get the most authentic atmosphere. 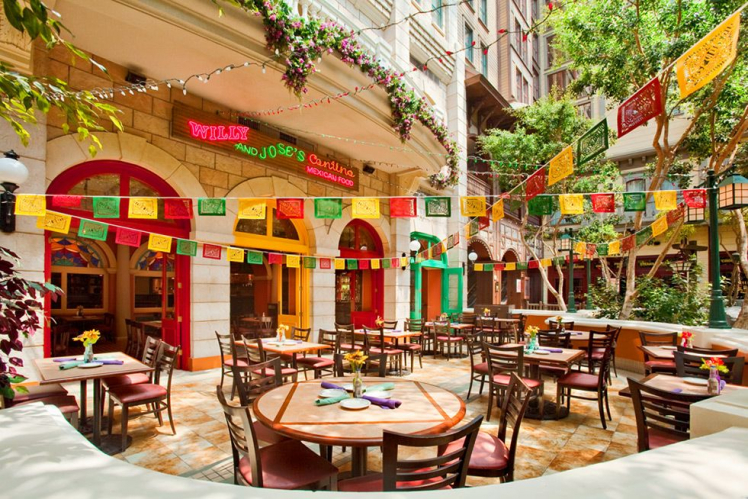 Located in the Bosque de Chapultepec, this is one of Mexico’s most visited tourist attraction and houses an incredible collection of relics and artifacts related to the country’s Mesoamerican history. Utterly vast, don’t expect to be able to absorb it all in a single visit, although some highlights include the hall devoted to the Aztecs, where the sun stone, unearthed in 1790 beneath the Zócalo, is to be found, as well as other incredible sculptures of Aztec gods. About 100 meters in front of the museum’s entrance, the incredible voladores rite, which involves flying from a towering pole, is performed by indigenous Totonac people every half hour.

Dominating the central square - or zócalo - of Mexico City’s historic center, this is the oldest cathedral in Latin America; taking 250 years to build, it is made from the stone of a Mesoamerican pyramid. The mix of European and Mexican influences in the details is striking, but just as incredible is the cathedral’s ‘sinking’ aspect, which puts its interiors and decorative features at odd angles. Mexico City’s varying sinking rates have caused damage to a number of historic buildings over the centuries, something that frequent earthquakes have further contributed to; work is ongoing to rectify the Cathedral’s endless shifts and adjustments. 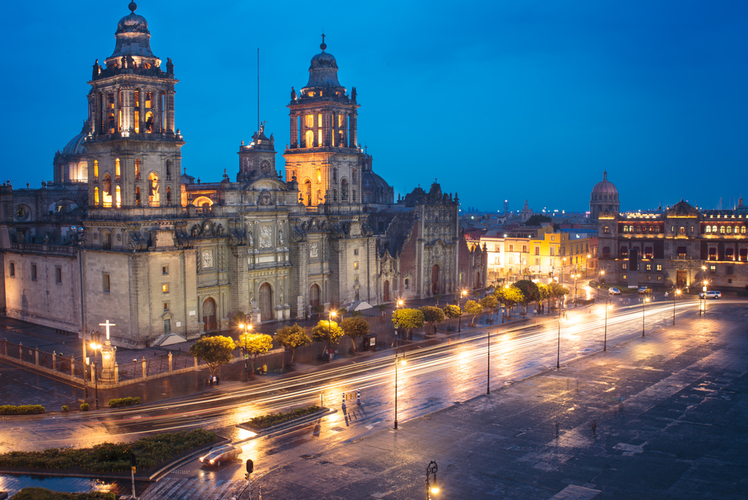