Top 10 Unique Beaches Around the World

Sand and surf is all you need for a beach, but a truly unique beach brings together other forces of nature. From volcanic remnants and mineralized sediment to coral, glass, and super salinity, some beaches are as much a lesson in history and geology as a beautiful place to relax. The simple pleasures of sand are actually pretty complex in structure, so it makes sense that beaches differ so much across the globe. Check out these 10 unique beaches around the world.

Millions of creamy white cockle shells make up this beach on Shark Bay in Australia, creating a dramatic scene of white and blue. The small clams are able to reproduce so rapidly in the unusually saline waters that natural predators can’t possibly keep up, and the small shells are consistently deposited on the shores – the shell layer is almost 9 meters deep. It’s one of only two shell beaches in the world, since the high level of salinity is incredibly rare, and its position on Australia’s western coast means it’s a bit off the radar of most beach-going tourists. 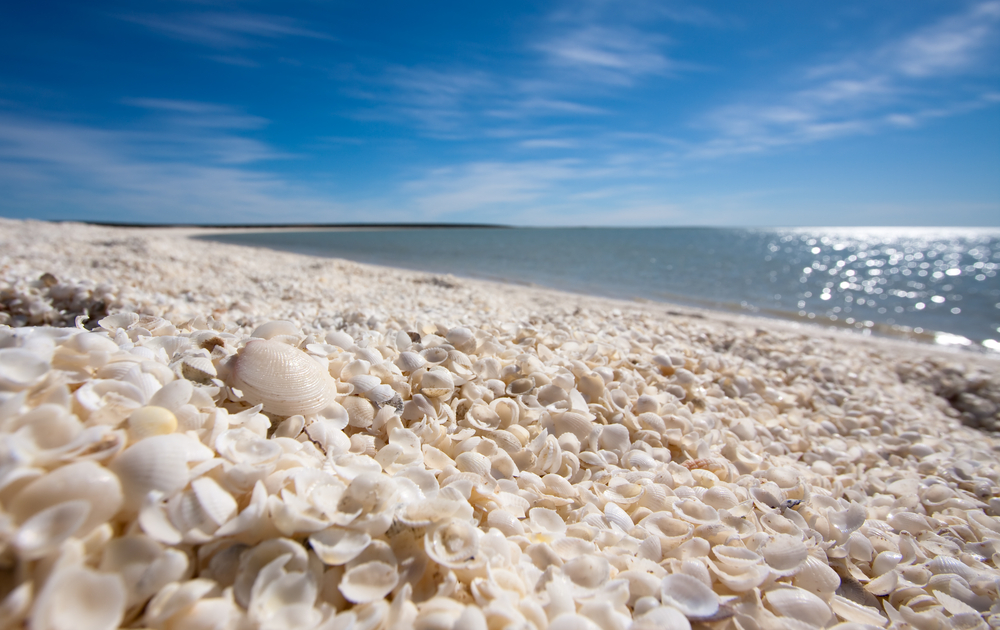 A beach with a rather unsavory beginning but a beautiful ending, this peculiar site near Fort Bragg is covered in pieces of colored glass that have been smoothed and softened by the surf. You wouldn’t guess from the look of it, but this beach began as a big trash pile, and over the years, the tides washed away debris and polished the dense glass that was left over. Today, it’s a colorful blanket of shiny gems that sparkles and shuffles under your feet. 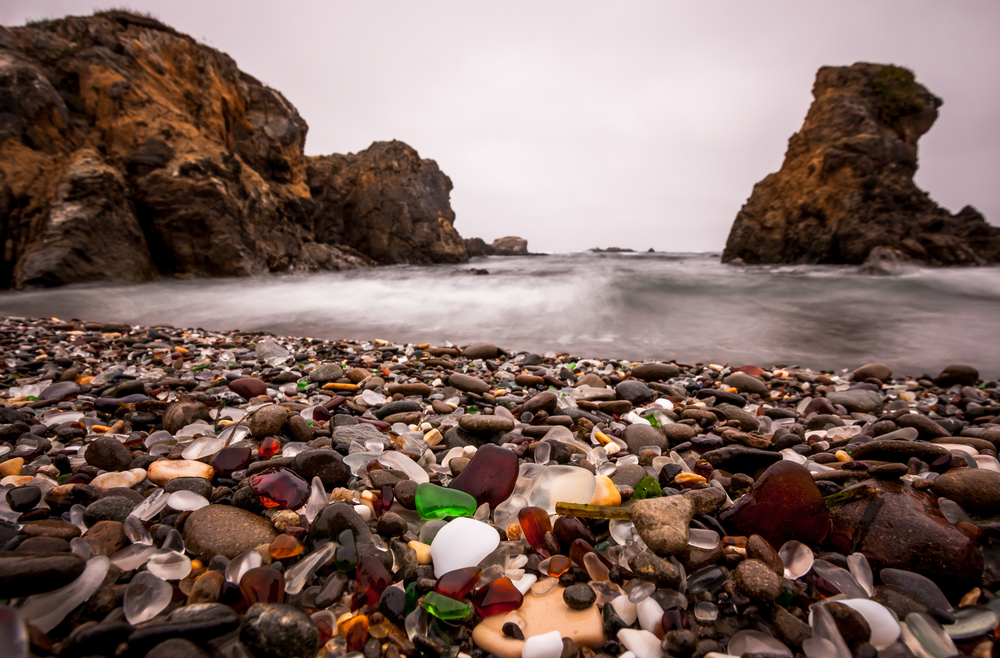 Iceland has more than its fair share of black sand beaches, given the incredible amount of volcanic activity the island has seen over the centuries, but Jokulsarlon deserves special mention. With icebergs floating close to shore, shards of ice scattered along the black beach, and flocks of Skua nesting close by, the scene is surreal. If you visit in the fall or winter, you may even be treated to a show of the Northern Lights, which brings the beach experience to extraordinary new heights. 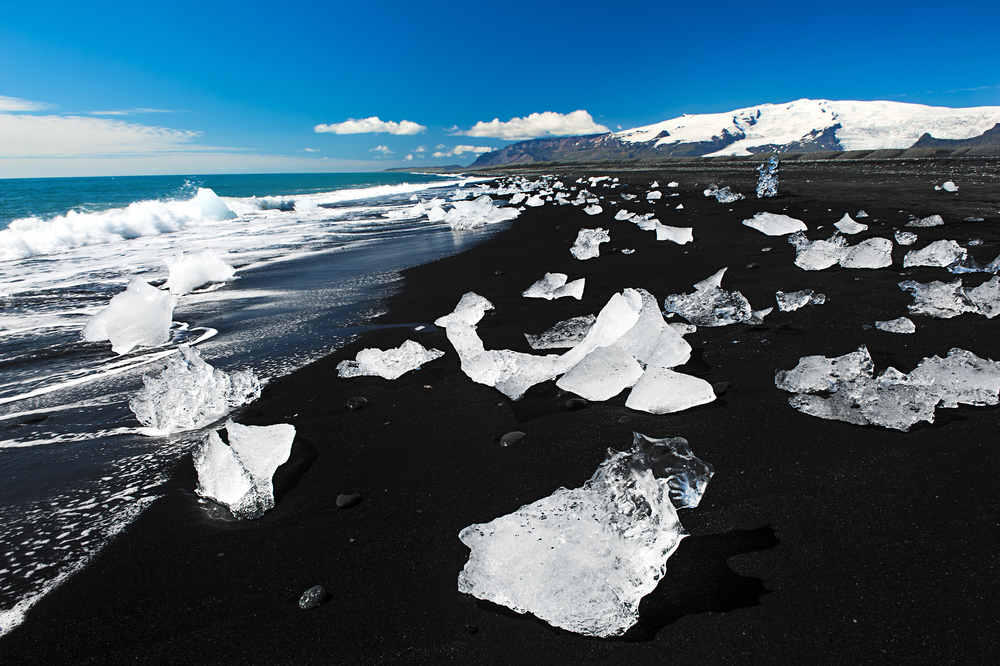 A very unusual (and very popular) beach in New Zealand’s Coromandel Peninsula makes use of the local underground hot springs to provide personal spas along the sandy stretch. Visitors can bring their own shovel and dig themselves a pit to bask in the warm, therapeutic water while enjoying the crashing waves and pretty coastline. Be sure to arrive at least an hour before low tide, so you can dig your pit and enjoy the spring before the tide rises and floods your spa! 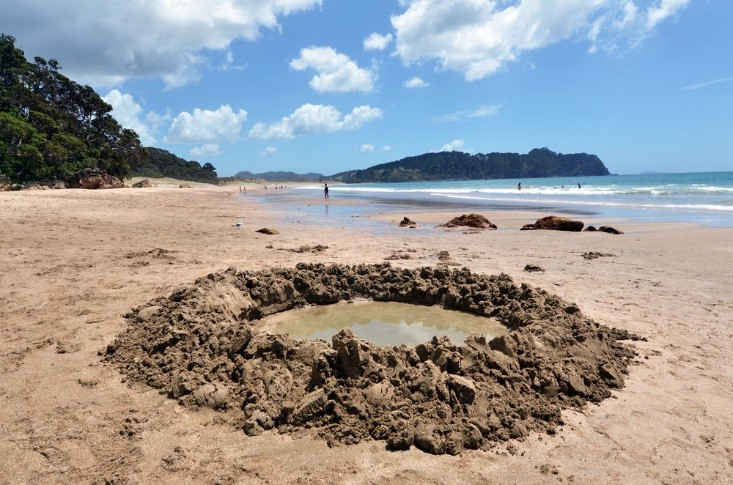 On the shores of Iriomote Island in Okinawa, the sand is more than what meets the eye. Tiny star shaped granules (or “hoshizuna”, in Japanese) make for a whimsical walk, though the explanation for their existence is more scientific than storybook: the star-shaped shells are the exoskeletons of tiny foraminifera organisms that have been sitting in the bottom of the sea. The best time to see the sand stars is soon after a typhoon has passed through and kicked up the shells onto the shore. 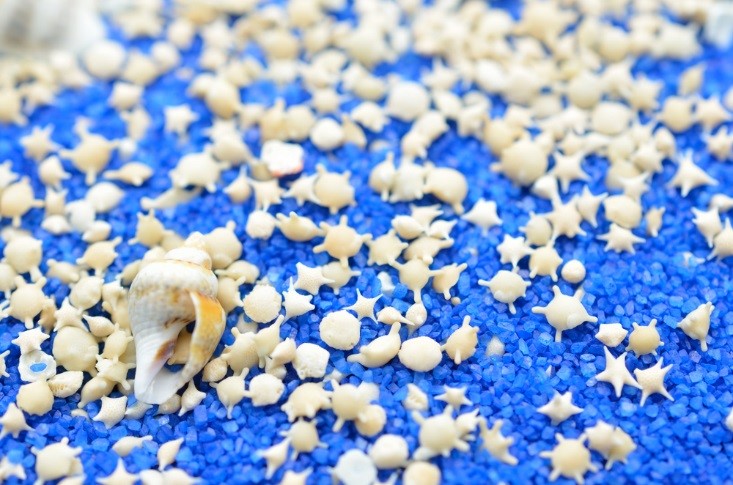 Beach and ocean go together like bread and butter, but this secreted sandy spot in the middle of a Spanish meadow is an exception to the rule. A circle of white sand surrounds a rocky lagoon that’s fed by a network of underground waterways connecting to the Atlantic, and lucky visitors can enjoy a beach experience without the crashing waves or coastline chaos. It’s only 40 meters long, but the picturesque site is worth it for peace-seeking beach goers. 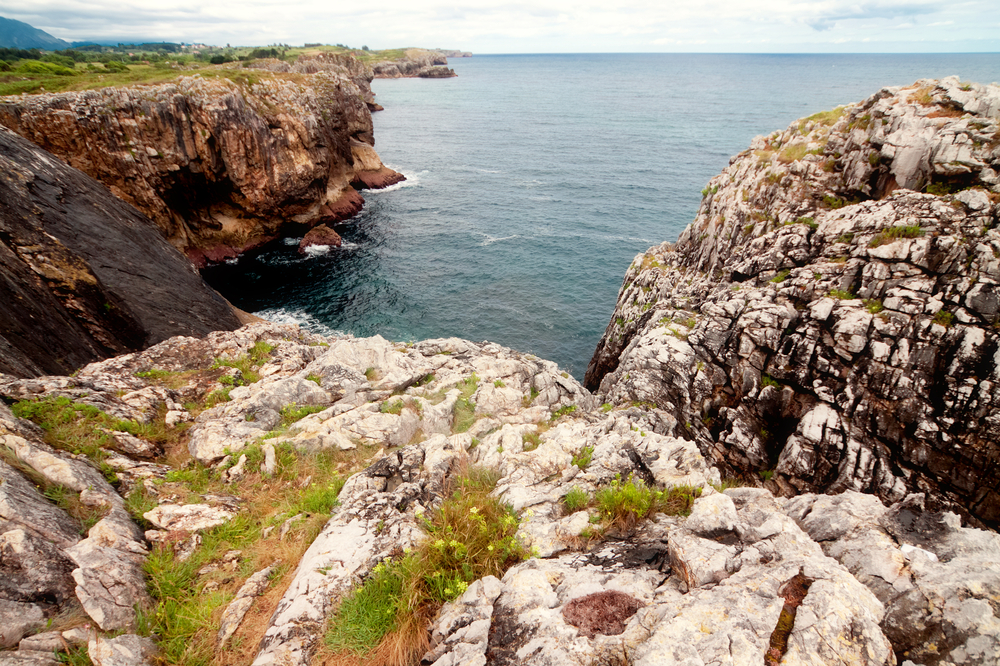 As far as rocky beaches go, the Giant’s Causeway is probably the most remarkable. Large geometric columns of petrified basalt lava that sprung up from the earth over 50 million years ago line the shore and jut out into the sea. The stony steps invite sea birds and host unusual plants, which adds to the natural wonder that earned this spot a UNESCO heritage designation. While the Giant’s Causeway isn’t the ideal beach to sunbathe, it makes for one of the most memorable coastal walks you’ll ever experience. 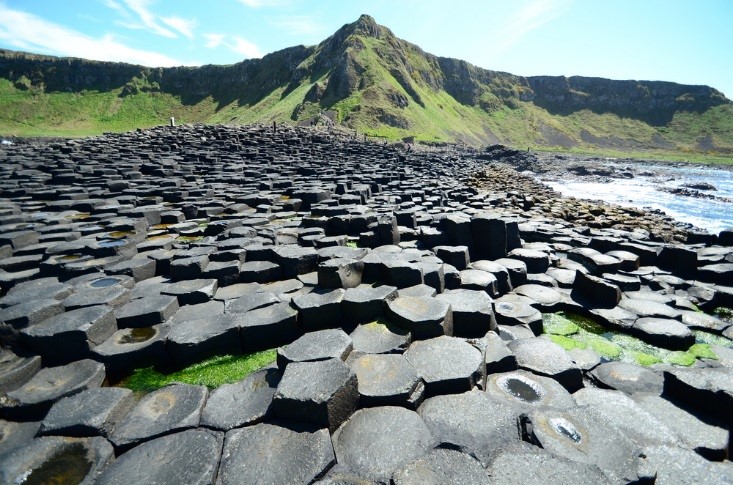 On the western tip of Hawaii’s Big Island, at the foot of a 49,000 year-old cinder cone, sits the green beach of Papakolea, one of only four in the world (and the most accessible for tourists). The rich green hue comes from a mineral called olivine – when this silicate is compacted and of high-quality, it’s known as the semi-precious gem, peridot. In the sandy form, olivine is denser and heavier than the surrounding ash fragments and black pyroxene rocks that come along with volcanic activity, so it tends to stay on shore while the rest of the debris is swept out to sea. 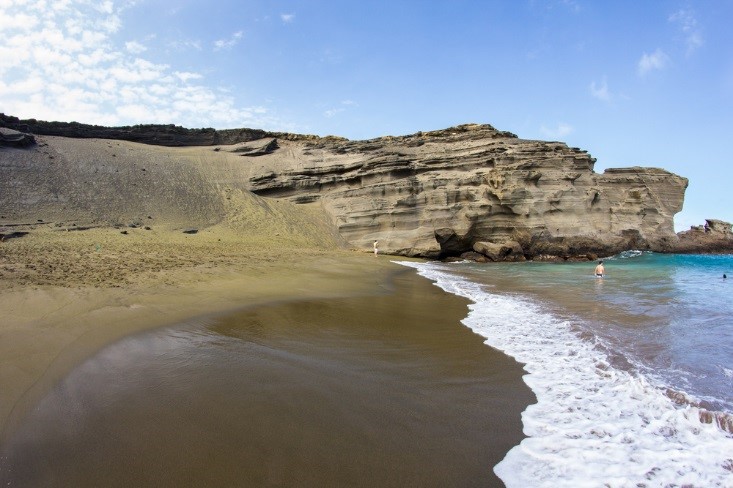 The Caribbean is known for its pristine beaches, but one little island off the coast of the Bahamas has an extraordinary sandy stretch that’s unlike any other. The east coast of Harbour Island glimmers pearly pink, the result of coral fragments, little pebbles, and tiny pink-shelled invertebrates known as foraminifera, all ground-up by the tides and deposited on the shore. The effect is astounding: a pastel pink land flanked by turquoise water and a soft blue sky, almost as if you were staring at a watercolor painting. 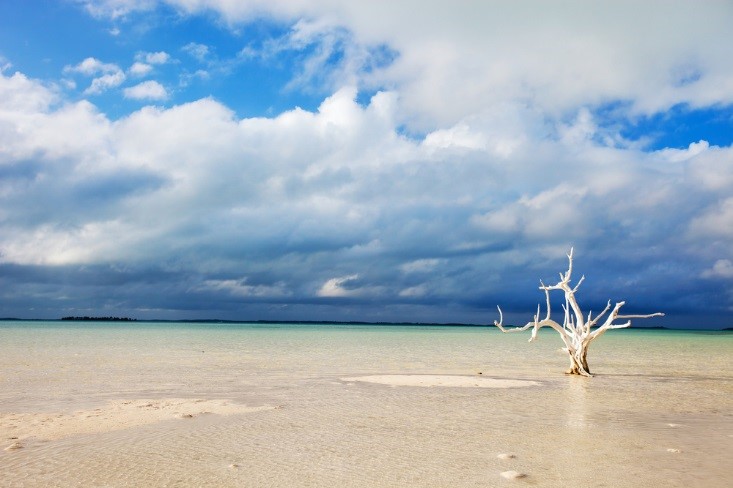 For a truly unique nighttime experience, go to the Maldives to witness the bioluminescent tides that paint the beaches neon blue. Since the starry effect is formed by plankton spouting chemicals, it can move around the sea and may stop at a number of islands. Reethi Beach, Kuredu, and Filitheyo, and Kandolhu seem to be popular “docking” spots for the bioluminescent plankton waves, but it’s difficult to predict which island will witness the phenomenon and when, so there is certainly a stroke of luck involved. 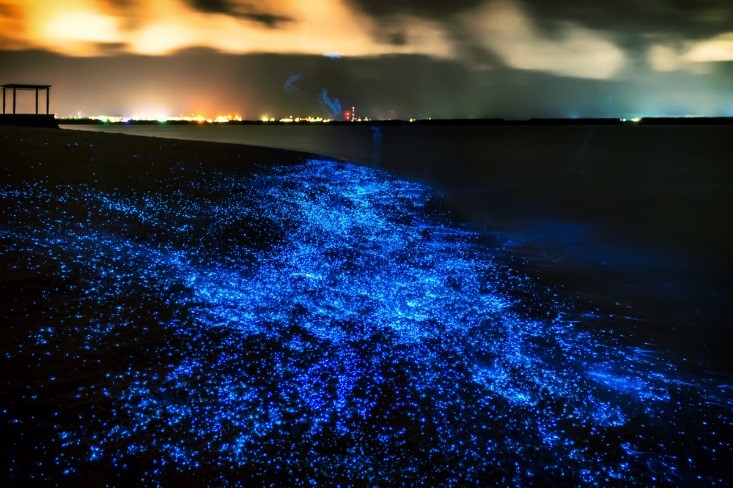 Happily, most public beaches are free, so you can pop out to many of these spots without doling out a steep admission fee. It’s a good idea to check the websites or local tourist office though – there may be some safety precautions or environmental rules that you’ll need to follow while you explore the sandy shores.