Unusual Things To See and Do In NYC

New York City is one of the primary places in the world that feels like home before we’ve ever even visited - it’s been in so many films and TV programs that it has a thrill of familiarity, even for first-timers. This is, of course, one reason why seeing all of those sights in the flesh is so enticing and exciting - but equally, half of the joy of traveling is the never-before-seen and the brand-new - so be sure to mix up your exploration of New York’s icons with these lesser-known treasures when you’re considering which unusual things to see and do in NYC.

Opened in 1904, this was New York City’s first ever subway station and looked more like a ballroom, with its elaborately designed vaulted ceilings, glass tiles, chandeliers and skylights. It was never used as a ballroom, mind you - but it was hardly used as a station either, not only because the nearby Brooklyn Bridge stop had better connections but because City Hall’s curved platform limited the trains that could stop here. It was eventually closed in 1945 but if you stay on the Number 6 line beyond its terminating stop, you’ll be able to see the station as the train curves back around the line. 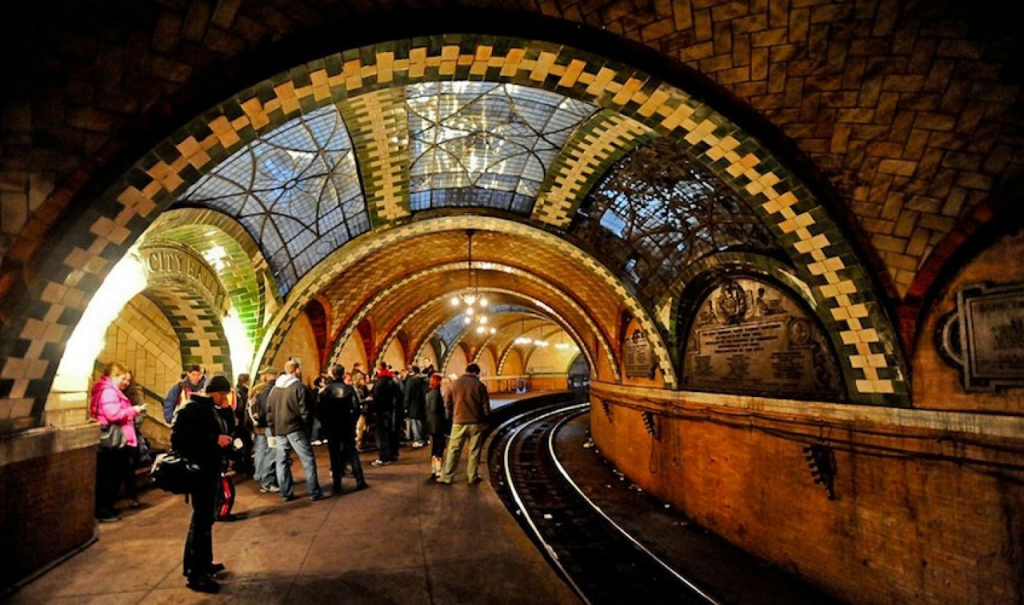 Manhattan’s numbered streets are well known, even to those who have never visited the city - but this one tends to fly under the radar and, in fact, was only officially recognized as a street - New York’s only fraction of a street, no less - in 2012. Running between West 57th and West 51st Streets, the space is one of the city’s Privately Owned Public Spaces, for which a recent initiative is now boosting awareness. It’s more a fun secret walkway than an actual attraction, but if you’re in the area, it’s quite cool to get a picture of yourself with the street sign, Alice in Wonderland style.

This was once one of New York’s greatest tourist attractions, but modern developments and the city’s iconic architecture have more or less sidelined it in the last century or so. Given the celeb-mad days we live in, however, there seems to be no better time to make Greenwood a must-visit again - names like Leonard Bernstein and Jean-Michel Basquiat have found their final resting place here, as well as around half a million other New Yorkers. If your lungs and quads are up to it, climb to the top of Battle Hill, which, as well as being one of the county’s highest points, also played a major role in the Battle of Brooklyn way back in 1776. 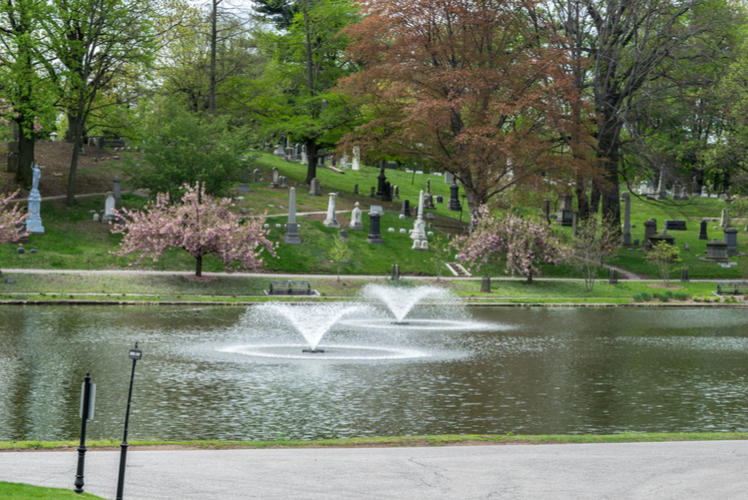 A place to hide gems and a hidden gem in itself - this old bank vault was built in 1904 and is buried deep underground NYC’s Financial District. Best of all, it’s now a bar so you can really enjoy your visit there. While you’re knocking back a bourbon, consider the fact that the vault, which was originally built for the New York Realty Bank, was so large and heavy that it had to be sailed down the Hudson River and then transported on railway tracks which had been specifically constructed for the purpose. There’s an entrance at either side of the vault, each of which has a door that’s 5-inch thick and weighs a massive 35 tons. 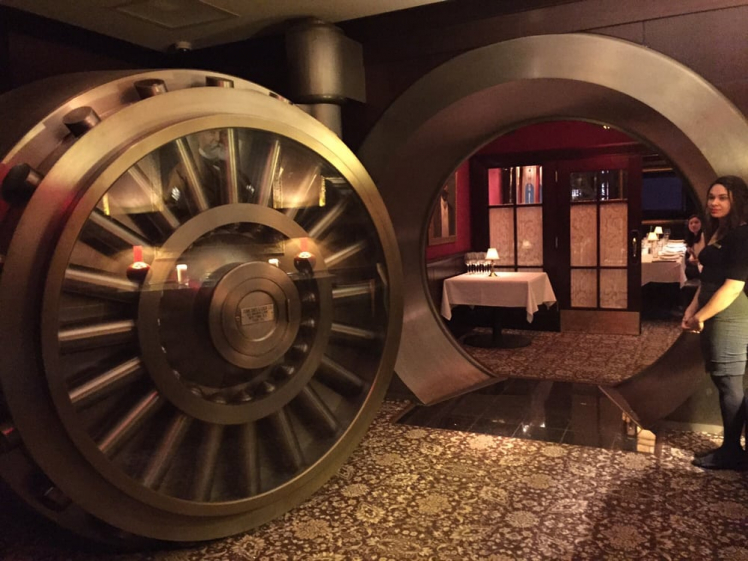 From the outside, this mansion looks postcard-lovely, but inside, it’s said to be haunted by the tortured ghost of Eliza Bowen Jumel. She married into a wealthy family in 1810, but failed to gain acceptance from society, thanks to sordid rumors about her past - and when her husband died in 1832, fingers were pointed in her direction, with tales of cruel and inhuman behavior. When her second husband suddenly died on the day they divorced, all the narrowed eyes were again on Eliza. She eventually died - old, mad and a recluse - and, although this house is open to the public for tours as it’s Manhattan’s oldest house and thus a place of historical interest, you may find that you get more than you bargained for on a visit! 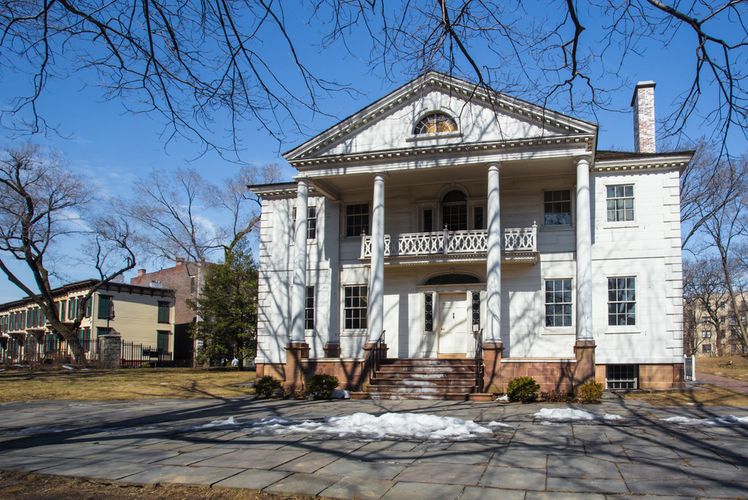 Most of us think of the fort where the Texans fought the Mexican Army when we think of The Alamo but this one is a giant sculpture in the shape of a cube, which was created by Tony Rosenthal and has stood in Astor Place, at Lafayette and 8th, since 1967. It’s one of those sights that’s come to hold a special place in the hearts of New Yorkers, who use it as an unofficial meeting place - it has even featured in music videos. Its turning mechanism is just one of the things that makes it special but be warned - you will need to have downed your spinach smoothie before you attempt to make it turn; it’s heavy! 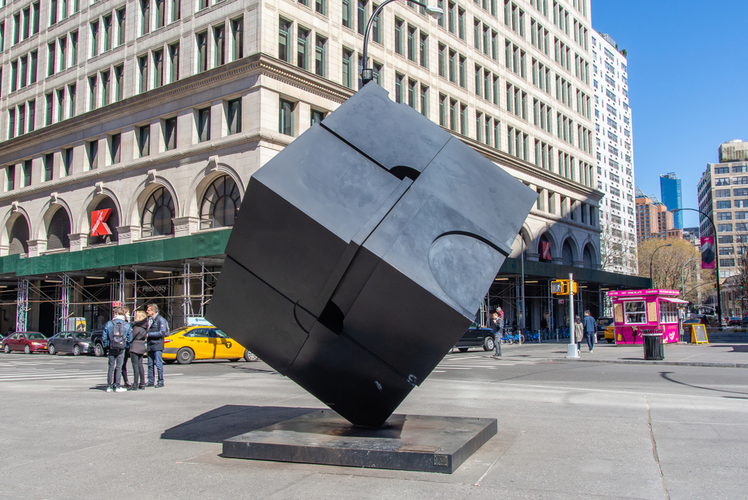 New York is well known for its theater and live performance - and sure, while you’re here you should definitely catch a show on Broadway. But don’t overlook some of the lesser-known joints, where you can buy tickets for a show at a fraction of the price you might pay elsewhere, and see breakout stars for whom you might pay a lot more in years to come. Stand up comedy and improv are the order of the day here and some seriously funny people take the mic, so come with your sides firmly stitched up because they are more than likely to split otherwise. 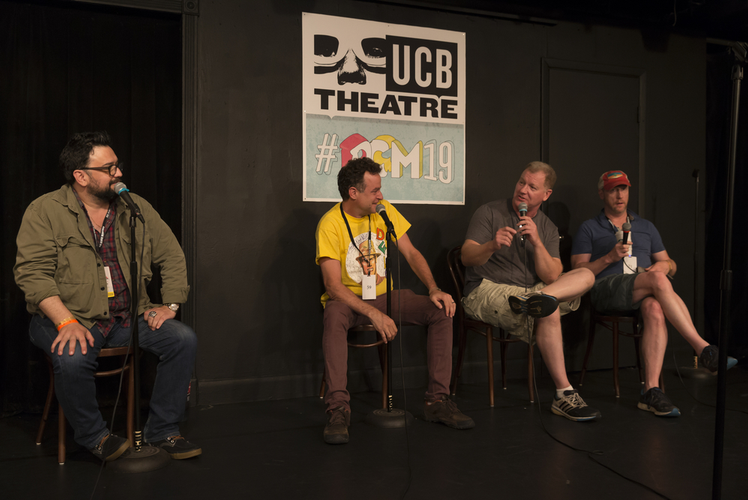 A trip to New York will pretty much always include some shopping but if your style is somewhat more unique than to simply head to a department store that dispenses little brown bags, then you need to track down The Brooklyn Flea Market. Why track down? Because it changes location according to the season- indoors in winter, outdoors in summer. Come with some cash even if you are just intending to browse - with loads of stalls to explore and a huge range of goods to sift through, you’re bound to find something you absolutely have to have. The street food on offer is awesome, too. 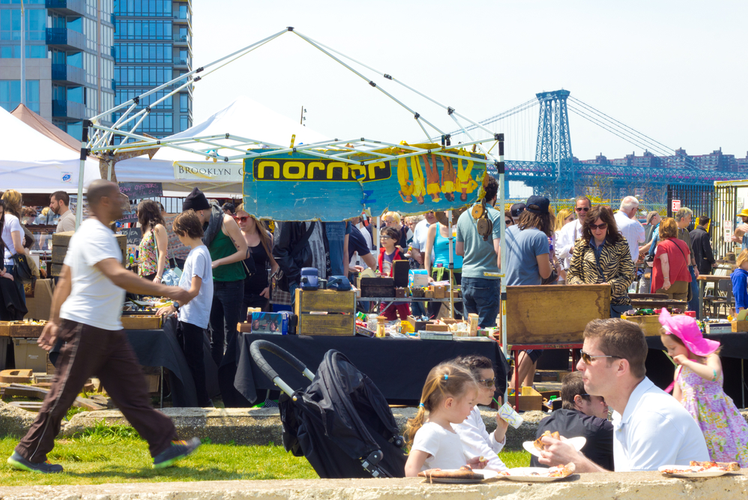 Leave that glittering metropolis behind you as you board the Staten Island Ferry and step back in time - all the way back to the 17th century, to be precise. Richmond Town comprises rolling working farmland and historic cottages - it’s essentially an open air museum, giving visitors the opportunity to visit the United States’ oldest schoolhouse and watch traditional artisans, like blacksmiths and carpenters, doing their thing. It’s also possible to participate in some of the crafts yourself - and candlelight tours are available if you really want to evoke those memories of yesteryear. There are even group overnights - just don’t get spooked! 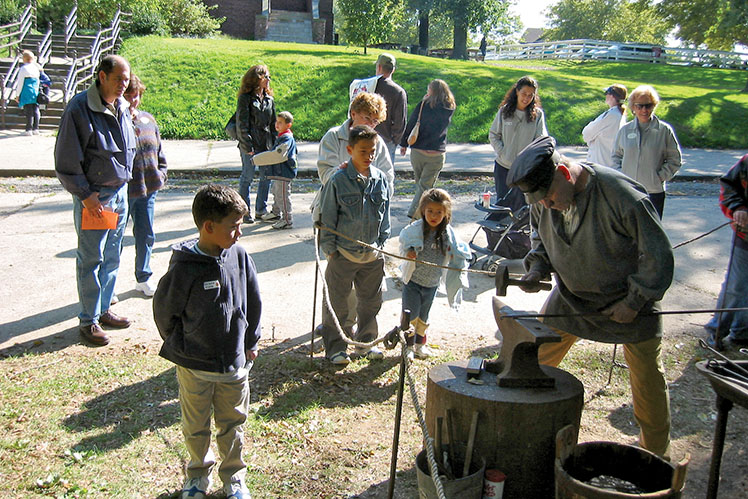 We all know that looking good is practically a requirement of living in New York but unfortunately, that tends to also make a hefty paycheck necessary. Make your way out of Manhattan and away from its pricey treatments and head for Queens, where the Korean-owned Spa Castle has no fewer than 22 pools and combines all of the luxury of a European spa with all of the soothing know-how of an Asian one. Depending on your tastes and interests, Sunday mornings may not be the best time to visit, as the resort has a reputation for getting loads of clientele who are still on a Saturday night buzz. 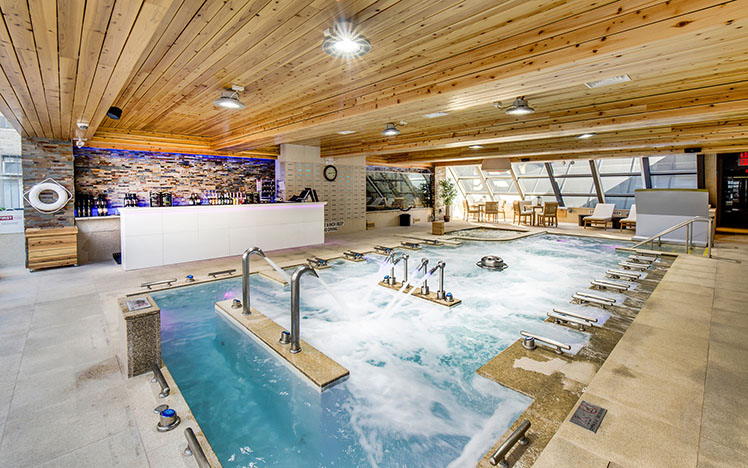 Of course you must visit the famous St Patrick’s Cathedral on 5th Avenue, but did you know that there’s another one downtown? Some of the most famous residents of the city have found their final resting place here for more than two centuries, including Andrew Carrigan, Dr Robert W. Hogan and Thomas O’Connor, but be aware that access is only available as part of a tour, which is conducted by candlelight for maximum atmosphere - book ahead. If subterranean adventures aren’t your thing, then the cemeteries are also well worth a wander.

Everyone knows about Chinatown and Little Italy but you need to factor a trip to K-Town into your Manhattan visit too: it’s where you’ll find the best Korean food this side of Seoul. Seoul food, if you will. Located in midtown Manhattan (between Fifth and Sixth Avenues) this is where to come for Korean spas and epic barbecue restaurants, some of which are open all night long - the perfect place to refuel after you’ve blasted your lungs at one of the karaokes, for which the neighborhood is also known. There are billiard halls where you can shoot pool under disco lights, as well as spas where you can watch nature scenes playing out on the walls while you relax and unwind from all of that big city madness - or just from the oddness of reading street signs in Korean. 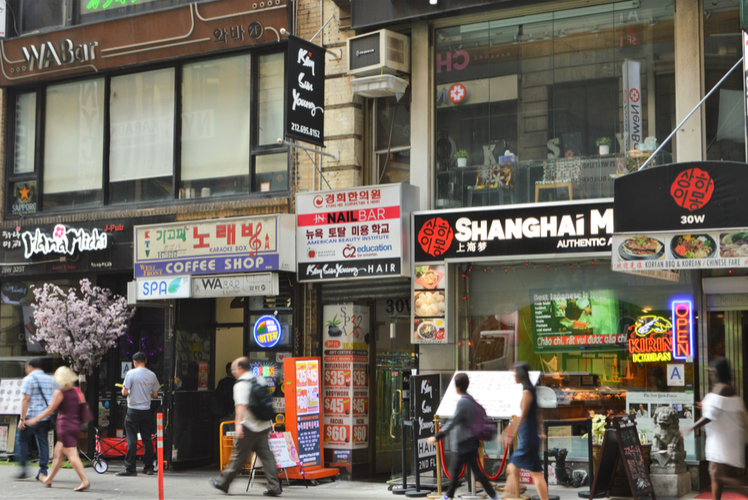 Sometimes the journey, rather than the destination, really IS the thing - and this is definitely the case with the Roosevelt Island Cable Car, which gives you amazing views of Manhattan and The East River as it soars above the Triboro Bridge towards Roosevelt Island. This, nestled between Manhattan and Queens, is tiny and primarily residential - and so doesn’t have much of its own appeal beyond some pleasant walks and good views back at the city. That’s fine though - either you can take the return cable car (did we mention that it will only cost you a MetroCard swipe?) or jump on the F train into Queens to crawl the breweries of Long Island City. 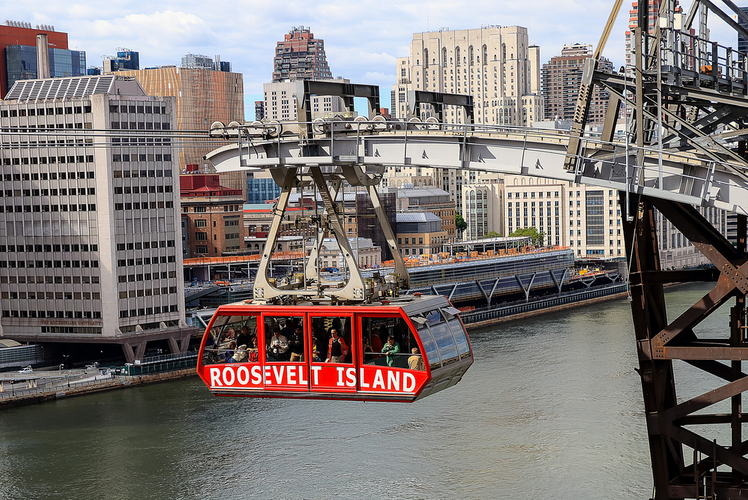 Yes that’s right - not ‘eat with’ but ‘Eathwith’ - the global supper club that allows you to dine with people who are the actual residents of the city you’re visiting - and, in so doing, get the fully immersive experience of being in a local’s home (come on, haven’t you always wanted to walk up the steps and into the door of a brownstone?!). Plus, of course, you’ll be able to eat their food, hear their stories and ask them questions. New York’s restaurant scene is legendary, but for absolute authenticism, at least one night of your visit should be spent like this. 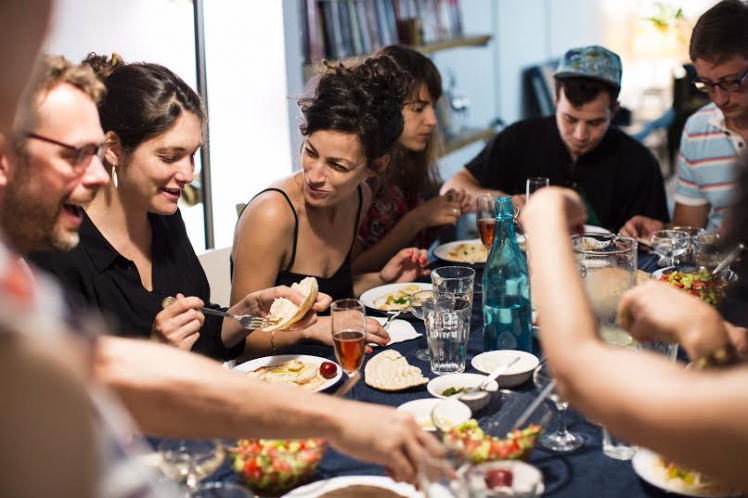 The Battery was the home of New York City’s first aquarium (it opened in 1896, eventually closing in 1941) and this transportative carousel pays a magical homage to this history. For a mere $5, you can get amongst 30 fiberglass fish and float through an aquatic world - all without any visible central pole and with the addition of LED color-changing effects to enhance the experience. And if you’re thinking - ‘yeah but I’m in New York - I wanna feel like I’m in New York, not in some second rate version of ‘The Little Mermaid’ - then look up from your perch on a perch - okay, not on a perch, but on a Clearfin Lionfish or Orange-Spot Wrasse - and take in the exceptional views of The Statue of Liberty. Trust us - you’re in New York. 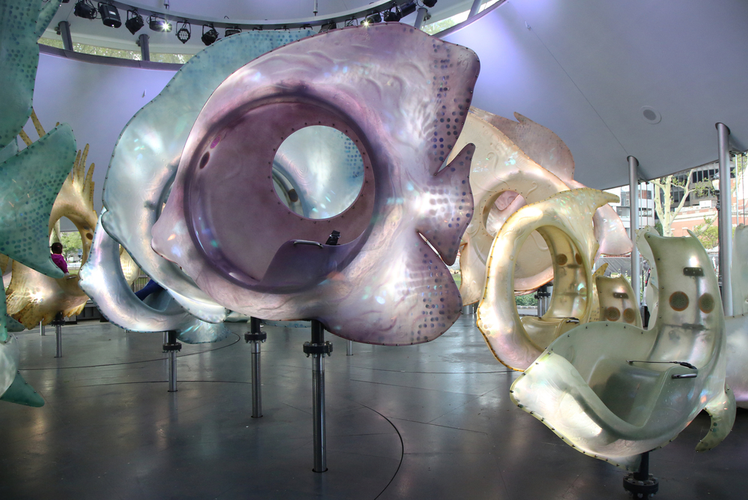 Comment on Unusual Things To See and Do In NYC